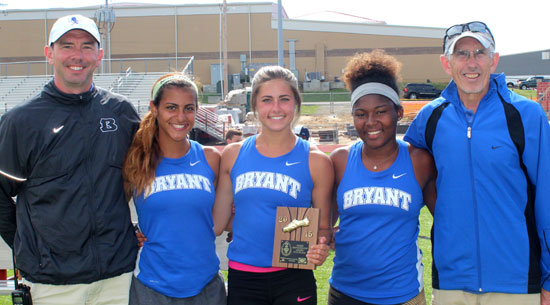 CABOT — Bryant junior Haley Hood moved up seven places on the second day of the 2015 Arkansas Heptathlon Thursday, finishing sixth overall with a total of 3,884 points.

Sophomore Jadyn Lewis also improved from her first-day ranking. Lewis finished with 3,503 points to move up to 16th place from 20th after the first day.

In addition, senior Jayla Anderson competed. Though she dropped two places to 25th with a total of 3,287 points, it meant that all three Bryant pentathletes finished in the top 25.

” I couldn’t be more proud of the girls performances,” said Lady Hornets sprint coach Keith Dale, who coached the trio at the heptathlon. “They have shown what hard work, dedication, mixed in with some determination can accomplish.

“The heptathlon is very physical and mentally taxing event,” he added. “These girls have worked hard during school, in the weight room, and after school with event-specific training. I’m so happy to see their hard work pay off.”