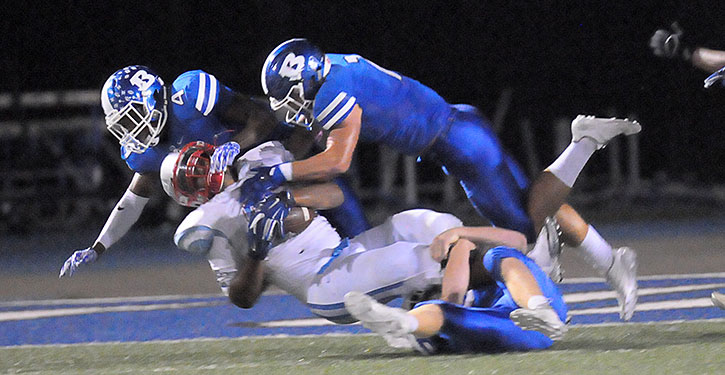 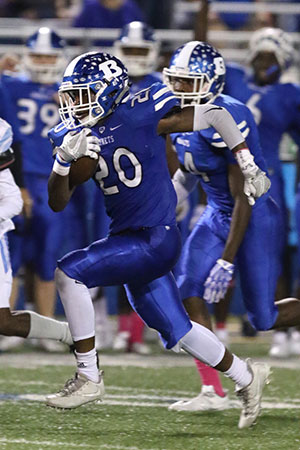 The start wasn’t scintillating and the finish wasn’t fantastic but in between the Bryant Hornets scored 27 points on offense and made a compelling goal-line stand as part of a 30-19 victory over the Fort Smith Southside Mavericks for Homecoming 2017.

With that, Bryant improved to 4-0 in the 7A-Central Conference, tied for first with North Little Rock, and became just the second team in the history of the program to open the season with a 7-0 start.

Oh, yes, they’ll probably remain the No. 1-ranked team in the state.

Pressed into duty as the Hornets’ starting quarterback after an injury last week to junior Ren Hefley, sophomore Jake Meaders completed 19 of 28 passes for 247 yards including his first varsity TD toss. He also picked up 34 yards rushing despite being dropped for losses five times along the way. 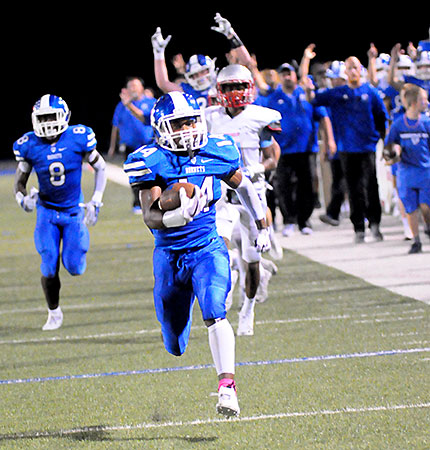 Brandon Murray races toward the end zone on a 40-yard touchdown reception. (Photo by Kevin Nagle)

Defensively, the Hornets held Southside’s talented quarterback Taye Gatewood, who had rushed for nearly 500 yards on the season through six games, to a net of minus-3 yards on 12 tries as the Mavericks mustered just 64 yards on the ground.

Gatewood passed for 191 yards on 15 of 29 attempts but Bryant safety Rondale Messer intercepted him twice.

And the defense’s goal-line stand provided one of the highlights of the season, let alone the game.

Bryant held a 17-3 lead and on the first possession of the second half, Gatewood completed a pass to Tyrese Solomon that broke for 66 yards with safety Cameron Vail making the touchdown-saving tackle.

And it truly was touchdown-saving. As was a stop at the goal line a play later when the Mavs ran a reverse to wide receiver Jordyn Jackson. He appeared to be bound for the end zone but Nick Smith, Antonio Todd and Messer combined to drop him at the 1. 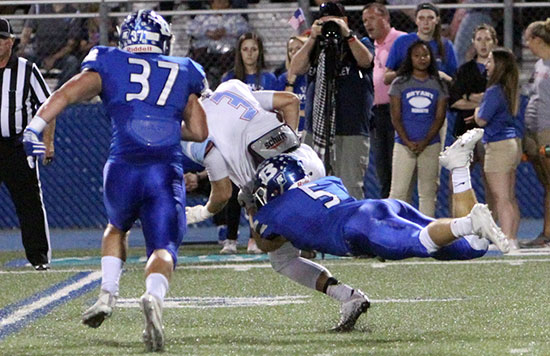 With a first-and-goal, Gatewood, under center for the only time all night, fumbled the snap. Though he got back on it, his delayed attempt to score was foiled by Todd, knifing in from the edge, and end Nate Wallace.

On second down, Gatewood was back in the shotgun. He tried to follow running back Brenden Ulrich over the right side only to have Smith combine with Todd for a stop for no gain.

Third down: Gatewood rolled out to the right this time, turned upfield at the hash and, once again, was denied as Johnny Wallace, Jakob Neel and Todd drove him to the turf for another no gain. 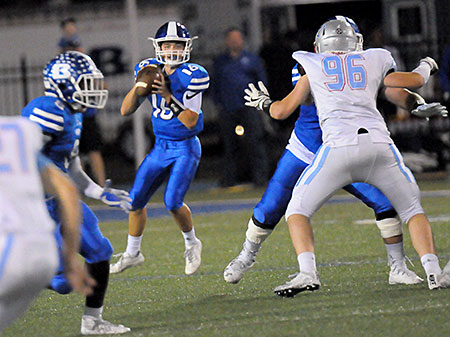 Failing on the direct route then trying to go wide, the Mavericks tried another tactic as they went for it on fourth down. They employed a little trickery.

Gatewood rolled right, stopped and threw back to the left where offensive tackle Riyadh Ananda appeared to be wide open near the 10, a tackle-eligible. But as Ananda caught the ball and turned upfield, the Bryant pursuit tracked him down led by Jake Wright, Antonio Rice and Smith for a loss.

“They made a heck of a stand,” said head coach Buck James. “It ended up being huge. 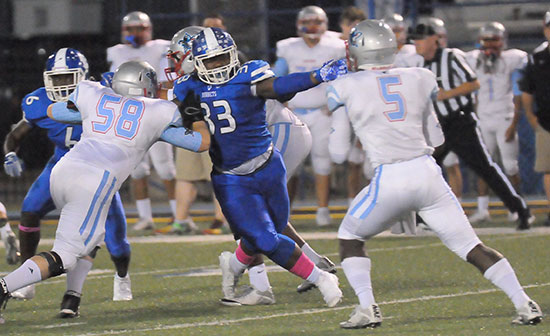 “But we still gave up too much, just too many yards on third down again,” he related. “We didn’t get off the field like we should. But, all in all, our defense played a lot better than the scoreboard showed.”

Indeed, it was 27-3 as the fourth quarter wound down. The Mavericks scored what appeared to be a cosmetic touchdown with 7:02 left when Gatewood and Solomon combined on a 28-yard scoring pass to convert a third-down.

On a two-point conversion, Gatewood optioned right out of the old “Swinging Gate” formation. As he was about to be tackled, he shot-putted the ball into the end zone where 6-4 Colton McBride caught it to make it 27-11. 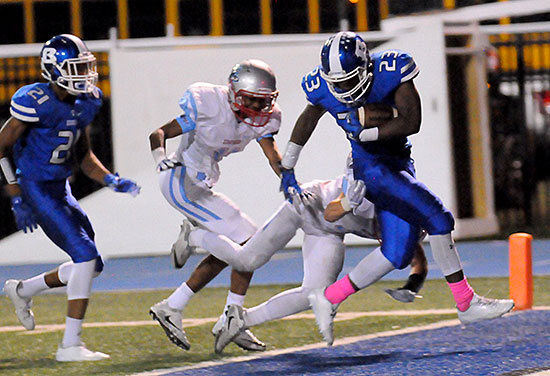 LaTavion Scott steps into the end zone between a pair of Southside defenders as Josh Robinson trails the play. (Photo by Kevin Nagle)

The Mavs recovered an onside kick that bounced off one of Bryant’s front line players. But, on the next play, Messer made his second pick.

Ramirez wound up adding his third field goal with 1:12 left to make it 30-11 then, on a squib kickoff, Ricardo Savoy, had the ball pop up into his hands at the 20. He returned it 80 yards for a touchdown.

On another two-point conversion, the snap sailed over Gatewood’s head but he chased it down and threw wildly towards the end zone. He was bailed out when the Hornets were called for pass interference. A second try from inside the 2 was cashed in on a keeper by Gatewood to set the final score with 1:01 to go.

The Hornets recovered the onside kick this time and used up the rest of the clock. 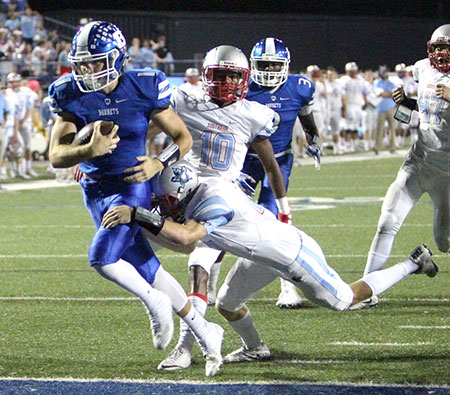 “We didn’t squeeze the run lanes,” James said of Savoy’s return. “We had some kids who subbed themselves, took matters into their own hands and put some young guys out there. And we didn’t recognize it from the coaching staff. That’s disappointing that kids would do that. We’ve got to overcome that as well.

“We’ve just got to play better,” he asserted. “We didn’t finish the game. We were relaxed. Good football teams can’t do that. We lost our 13-point spread (for tiebreaking purposes for the playoffs) and that could come up big. We’ve just got to take care of our business.”

To start the game, the Hornets picked up a first down but a fumble occurred and Southside’s Mason Gregory recovered 37 yards away from paydirt.

Aided by an unsportsmanlike conduct penalty, the Mavericks reached the 16. On a fourth-and-1, however, the Hornets stopped Gatewood short — shades of things to come — and Southside turned the ball over on downs. 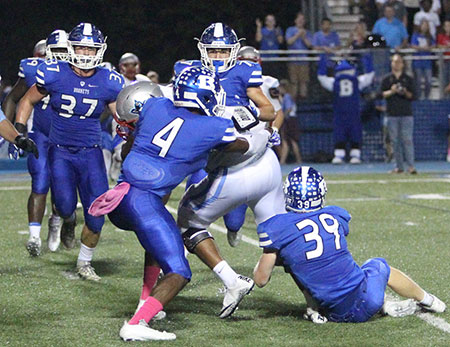 Jake Wright (39), Antonio Rice (4) and Nick Smith (7) combine to tackle Southside’s Riyadh Ananda on a fourth-and-goal tackle-eligible pass, capping a goal-line stand that started with a first down at the 1. (Photo by Rick Nation)

The Hornets punted on their next two possessions and, after the second one, Southside drove to the Bryant 14. On a third-and-9, Neel, Johnny Wallace and Messer dropped Gatewood for a loss and Conner Robles entered to kick a 35-yard field goal for the first points of the night.

“They changed up a little bit what they do and how they did it,” James said of the Southside defense. “It took us a minute to get adjusted to it from the players’ standpoint. They were going to force us to throw the football really quick with the pressure they were giving us. They were loading up the box and blitzing gaps and made it tough. But I thought we adjusted nicely and started playing well the second quarter.”

Indeed, in answer to the field goal, the Hornets drove for a touchdown, going 77 yards in 11 plays. They overcame a couple of sacks with Meaders completing all five of his passes. The big play was a screen pass to Scott, who turned it into a 32-yard gain. Moments later, Vail and defensive co-horts Neel, Austin Bailey and Bryce Thomas deployed in their short yardage offense. Vail waltzed into the end zone from 11 yards out.

The Hornets were ahead to stay.

They added to the 7-3 lead later in the quarter. After a Southside punt, Bryant had it at its own 30. On first down, Meaders was sacked at the 22, yet he came back to complete 4 of 5 passes on the drive. On a third-down at the Bryant 35, he found Ja’Kalon Pittman for 16 yards and a first down. On a third-and-1 at the Southside 40, he swung a pass to Brandon Murray who made a move on the first defender that approached him then took off down the left sideline for a touchdown.

“I thought he did a lot of good things,” James said of his young quarterback. “It was an adverse situation. They came after him and didn’t give him a lot of time to do what he does. They brought a lot of pressure. I thought he played about as good as he could play tonight and he’ll continue to get better. There’s not anything wrong with the game he played.”

In fact, it was impressively obvious that Meaders played better and better as the game went along.

On the final drive of the first half, the Hornets drove from their own 26 to the Southside 5. Vail was dropped for a loss then just missed on a throw into the end zone. With :20 left, Ramirez’s 29-yard field goal made it 17-3.

Later, trailing 20-3, Southside tried to dig out from its own 9 early in the fourth quarter. After Solomon (seven receptions, 158 yards) caught a pass for 16 yards, the Mavs were stymied at the 25. That’s when Messer made his first interception, returning to the Southside 3.

But a blocking penalty negated much of the return. Still, on the very next snap, Scott dashed 24 yards for the touchdown that had the Hornets up 27-3 with 9:39 left to play.

“I thought our kids played well with all the distractions this week,” James said.

“That’s probably the biggest concern I have,” the coach concluded. “Winning is important. Don’t get me wrong. But how we win is important as well, how well we do what we do. You want to keep getting better and better each and every week. That’s the goal for any football team, especially one that’s fixing to play the meat of its schedule.”

The Hornets start the gauntlet of their final three games against conference contenders with a trip to Cabot next Friday. The Panthers have been stunned each of the last two weeks, losing 49-14 to Conway then falling 16-14 at Little Rock Central. It figures they’ll be even more fired up to host the No. 1 team in the state as they try to secure a spot in the playoffs. 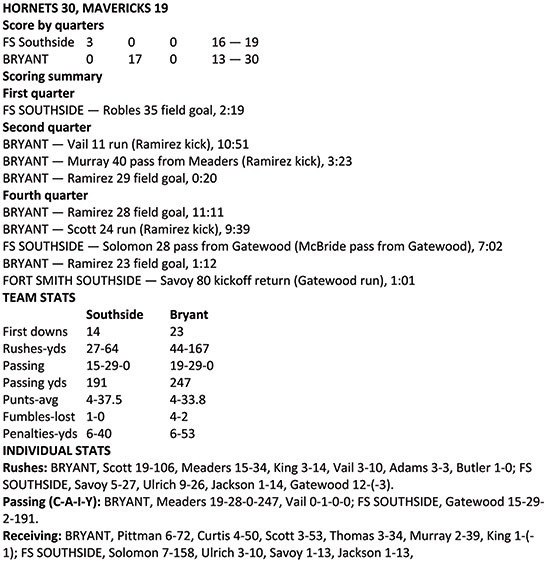