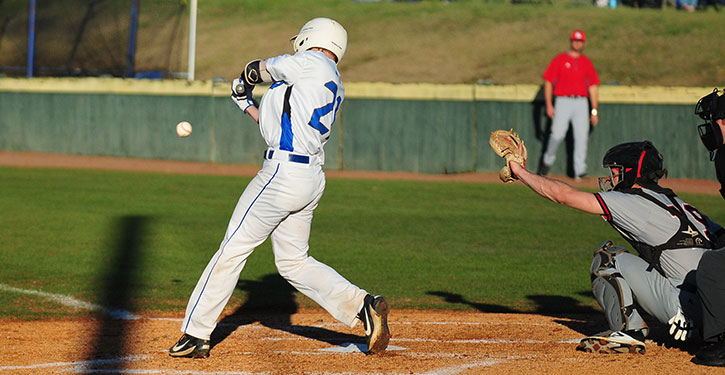 TAMPA, Fla. — The Bryant Hornets opened play in the Tampa Bay Spring Training Tournament on Monday with a pair of victories. In the opener, they outslugged the Hammond Skyhawks of Columbia, S.C., 18-8. They followed up with an 8-3 win over the St. Albans Academy Bulldogs of Washington, D.C.

The wins improved the Hornets to 6-4 overall this season with two more games set for Tuesday.

Seth Tucker, Matthew Sandidge, Coby Greiner and Myers Buck had three hits each as the Hornets piled up 18 of them in the lopsided win in five innings. Freshman Brayden Lester got the start on the mound and got relief help from junior Grayson Prince and freshman Christian Motes.

The Skyhawks took a 1-0 lead in the top of the first as they put together three of their 10 hits. That was their only lead of the game and it didn’t last long after Lester got a strikeout to end the inning with a runner stranded at second.

Jake Wright started a five-run home half of the inning with a walk. Tucker beat out a bunt single then Cameron Coleman walked to load the bases. Logan Chambers came through with a two-run single to put the Hornets ahead for good.

Coby Greiner grounded into a force out but a walk to Scott Schmidt loaded the bases for Beaux Bonvillain, who singled to center to get Chambers home. Buck’s knock to right got in Greiner and Sandidge capped off the inning with a sacrifice fly.

Lester pitched around a lead-off single and a one-out error to keep it 5-1 going into the Bryant second.

The Hornets blew the game up with an eight-run outburst, ignited by Tucker’s double. Coleman reached on an error then Chambers sacrificed them to second and third. Greiner chased both home with a double. Schmidt’s fly to right was dropped then Bonvillain cracked a two-run double. Though he was thrown out trying to stretch it to a triple.

With two down, Buck got things going again with a single to left. Sandidge yanked a base hit to right and Wright’s knock to center made it 10-1. Tucker beat out an infield hit to fill the sacks for Coleman, who’s grounder to short was booted. Chambers and Greiner followed with RBI singles to make it 13-1.

Hammond could only muster a two-out single in the top of the third and, in turn, the Hornets tacked on a run. Buck’s third hit started the inning. Sandidge singled to right and Ryan Lessenberry was plunked by a pitch to load the bases. A walk to Brandon Hoover forced in the run.

The Skyhawks broke loose in the top of the fourth, scoring four times before Prince came on to strike out a pair to end the inning.

In the bottom of the inning, Logan Catton cracked a double and stole third. With one out, Buck reached on an error to get him home then Sandidge drilled a double. With two away, Tucker reached on a miscue to make it 17-5.

An error, a pair of walks, a hit batsman and a single produced three more runs for Hammond to in the top of the fifth as they held off the run-rule for a bit. But the Hornets got the run they needed to end it in the home half. Greiner singled, Catton was plunked then Bonvillain’s grounder to second got through, allowing Greiner to score.

Bonvillain picked up the win on the mound with relief help from Schmidt.

The Hornets built a 7-1 lead in the first four innings. Greiner and Sandidge each had two hits in the game.

The opening inning began with a single to center by Wright then walks to Tucker and Coleman. A balk allowed Logan Grant, running for Wright, to trot home then Chambers got a squeeze bunt down to plate Tucker.

The Bulldogs took advantage of a walk and a throwing error to get a run in without a hit in the bottom of the first.

Bryant’s second inning began with Buck reaching on an error by the St. Albans’ second baseman. Sandidge beat out an infield hit then Wright sacrificed them to second and third. With two down, Coleman came through with a two-run double to make it 4-1.

The Bulldogs managed a pair of hits in the second but Bonvillain escaped further damage by fanning the next two batters.

Neither team scored in the third as Bonvillain notched two more strikeouts. In the fourth, Sandidge and Wright drew walks and Tucker beat out a bunt for a single. With the bases juiced, Coleman walked to force in a run and Chambers delivered a sacrifice fly for his second RBI. Greiner beat out an infield hit as Tucker scored to make it 7-1.

Bonvillain worked a 1-2-3 home fourth but, after the Hornets were retired in the top of the fifth, St. Albans put together a rally with a single, a double and two more hits to make it 7-3 before the Bryant lefty got the final two outs, including his eighth strikeout.

Chambers ripped a two-out triple in the top of the sixth and scored on Greiner’s second hit.

Schmidt took over on the mound for Bryant in the bottom of the sixth. The Bulldogs managed a single in each of the last two innings but Schmidt shut them down with no further threat to close out the victory.