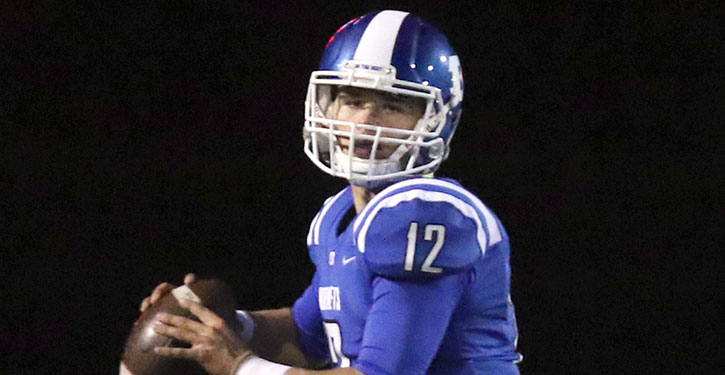 Editor’s note: For the live game stream of tonight’s game, go to https://youtu.be/Vx7jqq6pB58

A lot has happened since the Bryant Hornets and the Fayetteville Bulldogs got together at Harmon Field in Fayetteville on Sept. 20. At the time, the two teams were ranked 1-2 in the state. Bryant has lived up to that number one ranking, staying there all season and going 10-0 while Fayetteville, after suffering a 42-13 loss that night — two plays into the second half, it was a mercy-rule game — has been up and down, finishing 5-5, the fourth seed from the 7A-West Conference.

But the Bulldogs managed to win their first-round game in the playoffs, dumping Cabot, 44-14, last week. That set up tonight’s rematch against the Hornets, who had a bye last week.

“I think we needed it,” said Bryant head coach Buck James. “We had a few bumps and bruises that we could stand to have a week to heel up. I think for that purpose, it was good.

It’s the third year in a row the two teams have played twice, and all but this year’s week 3 contest have been decided by less than three points.

If the Hornets can win, they’ll face another rematch next week against the winner of tonight’s Conway-Bentonville West contest. The Hornets bounced West 38-0 in week 2 and drilled Conway two weeks ago, 42-7.

“Our kids seem excited about getting to play,” said James, who led the team to its first State title last Fall. “We’re going to have to play teams that we’ve already beaten. We have to fight complacency. Because every game’s different. They’ve got a nothing-to-lose mentality coming in. The playoffs are a situation where you don’t have to be better. You just have to be better one time, that one night.

“I told (the Bryant players), none of them is perfect,” he continued. “There ain’t a coach out there or a player out there perfect. But when we put everybody together, we do a pretty good job of working to perfection.

“I think that’s all you can ask for out of a bunch of kids and a bunch of coaches, to do the best they can every Friday night,” James asserted. “It’d be easy to make an excuse about why we didn’t do it. I told them, history’s taught for a reason. I mean, there’s banners out there for teams that went 10-0 or 11-0 and, you know, those teams didn’t finish, and we have to learn from that. We could get beat in the next two or three weeks and still have a better year than we had last year record-wise. But is it really better?

“Your perception of what you think is good and what’s really good might be different depending on who’s looking at it. We don’t want to be one of those teams or coaching staffs that are saying, ‘Shoulda, coulda, woulda”. So, you have to battle against complacency.”

It figures that both teams are better than they were in their previous meeting.

Of Fayetteville, James said, “They’re better on defense. I think they’re better at running the football. They’re better at throwing and catching the football. They’ve competed with everybody except the top three teams in their conference. I think they have cleared some hurdles that were keeping them from doing that. They played very well against Cabot, a good Cabot football team. And they played at a high level, a high level against Van Buren right before then.

“So, it seems to me that they’re sort of on a roll of playing better,” he continued. “I think they think they’re playing better and, in the big scheme of things, that’s really all that matters. Confidence is everything. What they think is all the matters. What we think has nothing to do with what they’re going to do.

“I do believe they’ll give us their best shot. They get a chance, with a new coach, to play in the semifinals. That is a huge hurtle for them. So, they’re grasping for every straw they can get, going through the transition. I think the way they started and the way their conference season went to be able to do that would be a big feather in their cap.”

He acknowledged that his team, as the defending State champion, has been playing with a bull’s-eye on its back from the start. But he likes the way they’ve handled it.

“I’ve heard (University of Alabama coach) Nick Saban talk about it many times, it’s hard to be the guy every week when everybody’s trying to give you their best shot,” he related. “You have to mentally and physically prepare yourself each week.

“You can’t play games down the road,” he continued. “You’ve got to play one Friday night at a time. You’ve got to go 1-0 each week. You’ve got to bring your best game. I think that’s a process of maturity, teamsmanship, if that’s a word, and competability, which is another word I use that’s not a word. But I think you’ve got to have those things.

“And you’ve got to be able to put them in order because you can’t play on Monday and you can’t play on Thursday. You’ve got to prepare those days. Then, when you get to Friday, you’ve got to be able to play like your hair’s on fire, play as long as you can, as hard as you can. And our kids have sort of figured that out. And that’s hard to do. You look at professional level, college level, other high school levels, it’s hard to be perfect, no matter what you do in life.”

Asked how he thinks his team has withstood that every-Friday-night pressure, James said, “I think that’s just maturity, kids being in the program and knowing what to expect.

“I think the grind of the second year for sure, I thought we got tired. We wore them down. Then, we came back last year, and we felt like we didn’t play our best football because we didn’t have our pedal to the meddle, as you would say, the whole year. We got really good at the end of the year and played well.

“This year, we started out playing well and we played well through the whole year. I don’t sense that our kids are tired or anything. They understand the expectations, what we expect from them in practice and in the weight room and through the process. They’ve just been conditioned to be able to do this for a longer period of time. That’s what happens when you’re coaching staff’s been there through the whole time those guys have been there. The expectation is the same the first day as it is the last day.”

The Hornets have outscored their opposition this season, an average of 46.2 to 9.3. In the running game, senior Ahmad Adams is just 192 yards from a 1,000-yard season. He had one of his best nights at Fayetteville, picking up almost that much yardage in that game, despite playing in just the first half.

The Hornets have had to juggle the offensive line. Senior center Devin Pitts will sit out after being ejected from the Conway game for fighting. Junior Jack Powell will get the start with sophomore Brooks Edmonson, the starter at right tackle, ready to go if needed.

Bryant has an 21-11 advantage on takeaways.

“A lot of our kids have been through this,” James said, referring to last year’s run. “They know what’s at stake. I think they like the end result. So, it’s an opportunity for us to try to get back.

“You know, when you’re talking about a football team that hasn’t been there in 70 years and now we have a chance to be there — really we’ve had a chance, maybe a little outside chance the last four years — but have a chance to be in Thanksgiving games four years in a row,” he mentioned. “So, these guys understand the process. Getting over the hump and getting into the game has been our biggest hurdle. It’s there for the taking. If we can keep playing well and keep doing what we’re doing, then we’ve got a chance to be there. If we play poorly and don’t execute and don’t come together as a football team then we’ll get a vacation.”