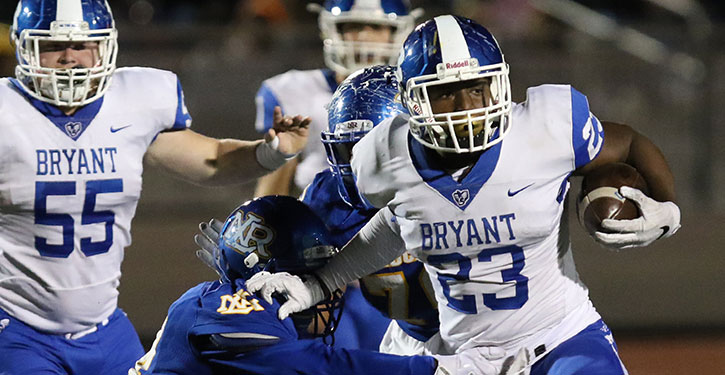 Hornets’ bid to knock off No. 1 Charging Wildcats denied 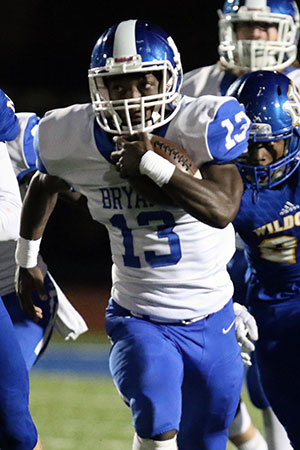 NORTH LITTLE ROCK — As it turned out, the difference between the number one-ranked North Little Rock Charging Wildcats and the number two-ranked Bryant Hornets was a clutch fourth-quarter touchdown drive and a defensive stand.

The two teams had traded licks on Friday night at Charging Wildcats Stadium and it was tied 28-28 with just over eight minutes left to play.

Keyed by a 27-yard pass from Kareame Cotton to Oscar Adaway on a third-and-8 bubble screen, a play that plagued the Hornets all night, the defending State champion Wildcats drove for a go-ahead touchdown with 4:58 left to play. Brandon Thomas scored from the 7.

But kicker Ethan Lee, who had just barely made extra-point kicks all night, missed this time and the door was open for the Hornets.

All they needed was another drive for a score and to have Grayson Scoles, already 4-for-4, add the extra point.

But North Little Rock’s defense, which had gotten a lot more stingy after the Hornets opened up a 21-0 lead by the end of the first quarter, stopped Latavion Scott for no gain on first down. They then sacked quarterback Ren Hefley for a loss of 5. A third-down pass fell incomplete and the Hornets had to punt. 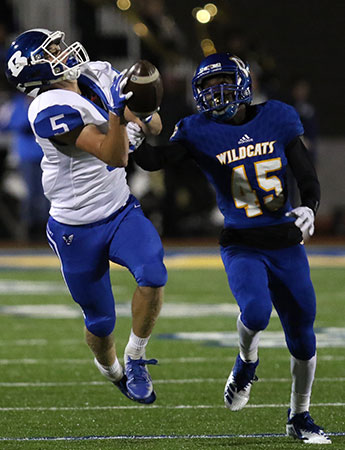 Bryant never got the ball back as the vaunted three-headed monster of a running attack behind the Charging Wildcats’ offensive line, marched from their own 38 to the Bryant 13, eating up the last 3:30 on the clock to pull out a 34-28 victory, their 22ndin a row.

The win clinched at least a tie for the 7A-Central Conference championship for North Little Rock. If somehow Cabot could upset the Cats next Friday, they would be tied with the winner of Bryant’s rivalry game at home against Conway and earn the title and the number one seed in the playoffs.

The winner of the Bryant-Conway showdown will get the number two seed and a first-round bye. Plus, they’ll be placed on the opposite side of the playoff bracket from North Little Rock.

“All we needed to do was go down and score and kick the extra point,” acknowledged Hornets coach Buck James. “But we go three and out. It’s hard to explain.

“I thought we played hard. I just don’t think we played well,” he added. 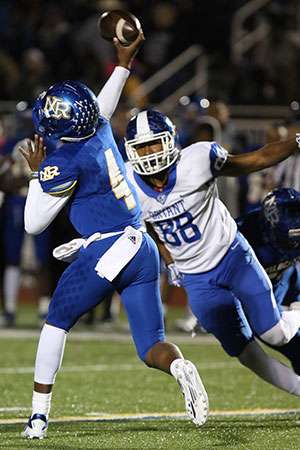 “There’s no doubt, they beat us down,” the coach said of the fourth quarter and the drive that closed out the game. “We had guys that didn’t want to tackle them. We had guys that couldn’t get off blocks. They controlled the game there at the end with their running backs and their line play. It wore us down and, I mean, we didn’t handle it very well.”

Brandon Thomas rushed for 115 yards on 16 tries and fullback Tyler Day had 99 yards on 16 rushes as the Wildcats grinded out 276 yards running the ball.

But it was the Cotton’s passing that really hurt the Hornets. Though he completed just 8 of his 17 tries, three of them went for touchdowns including a pair of tight end Drew Martin.

In many ways, it was the kind of game you’d expect from the top two teams in the state. After the Hornets roared to the 21-0 lead, North Little Rock scored 28 unanswered points only to have Bryant gamely rally to knot it again.

The tying touchdown was set up by Braylen Butler’s 64-yard kickoff return. Jake Meaders, who caught a pair of touchdown passes from Hefley, hauled in a 25-yarder that, with Scoles’ kick tied the game.

“We did what we’ve been doing,” said James. “We played really good one quarter then we just sort of hung on for the next three.” 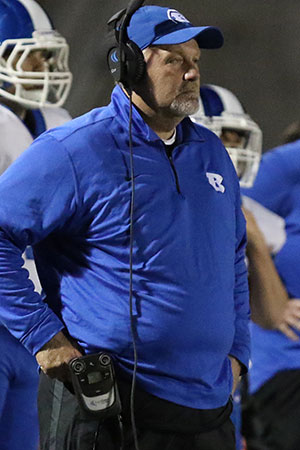 The turning point came right before the half. Bryant led 21-7 and Bryant cornerback Derrick Rose recovered a fumble by Adaway. Sparked by an 11-yard bolt by Scott and a 7-yard scramble by Hefley, the Hornets drove to the 19. On second-and-10 there, North Little Rock blitzed two linebackers and Dwain Hunt sacked him for a loss of 11.

Hefley came back to compete a 5-yard pass to Meaders then, on fourth down, connected with Josh Robinson who was tackled just two yards short of a first.

Bryant forced North Little Rock into a three-and-out and, on a short punt, had possession at the Wildcats’ 49 with 2:36 left in the half.

After an offsides penalty pushed the Hornets back, Hefley tried to find an open receiver deep only to have North Little Rock’s Sedrick Cain intercept.

It was Bryant’s only turnover for the game. The Wildcats needed a 2-yard run on a fourth-and-1 at the Bryant 42 to keep their drive going as time was running out. It was then that Cotton hit Martin for 23 yards to the Bryant 17. A play later, the duo hooked up for a 14-yard touchdown with 0:16 left in the half.

And the Charging Wildcats were due to get the second-half kickoff. 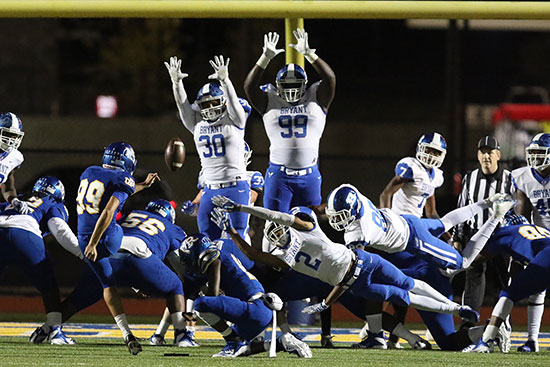 On 11 plays, they reached the Bryant 35 where the Hornets had forced a fourth-and-5 play. North Little Rock went for it and completed a 35-yard touchdown throw, once again with Martin on the receiving end.

Bryant had rolled to the early lead. On the opening possession, they needed just five plays to drive 74 yards for a score. Hefley completed a big 26-yard pass to Scott on first down then hit River Gregory on back-to-back snaps.

From the 25, Scott got his first carry of the game and laced his way to the end zone.

And, on North Little Rock’s first play on offense, Cott was sacked by Kajuan Robinson and fumbled. Austin Bailey recovered for Bryant and, on the first play, Hefley connected with Grant Botti and it was 14-0 less that two minutes into the game. 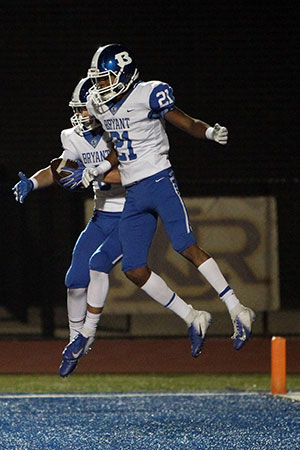 The Bryant defense responded by stopping North Little Rock’s next drive. On a fourth-and-5 at the Bryant 40, Kajuan Robinson and Bailey stopped Adaway short of a first down and the Hornets took over.

A 27-yard pass from Hefley to Meaders had the Hornets in business. Miles Aldridge picked up 8 yards on a swing pass and Scott barreled to the 19. But on a third-and-4, North Little Rock’s Terrell Allen knocked Scott down for a loss then hauled down Hefley for a loss on fourth-down.

Such drives hampered the Hornets’ efforts. They would get deep in North Little Rock territory only to stall out. Safety Tamaurion Wilson broke up a third-down pass.

Hefley’s 73-yard touchdown pass to Meaders had the Hornets out front 21-0.

North Little Rock answered but not until it faced a third-and-8 at its own 49. A quick pass to Adaway by Cotton broke big and the result was a 51-yard touchdown pass.

Regarding the scoreless second quarter, James said, “I just think (North Little Rock) played harder (on defense). They brought more pressure and played man, man-free and just played a little higher level. We broke some routes and we missed some passes. We were able to run the ball a little bit better in the second half.”

With the game tied at 21, the Hornets made a bid to regain the upper hand with a 14-play drive to the North Little Rock 32, mostly on the running game featuring Scott. A roughing-the-passer penalty helped along the way.

Again, however, the Hornets were unable to extend the drive and turned it over on downs. “We’d have a bad play or a penalty or we’d miss a pass or miss an opportunity to catch it, or a sack or something that kept us where we didn’t complete a series,” James acknowledged.
“We’ve got to stick with it. But, you know, when you throw the football, there’s three things that can happen and two of them are bad. The interception right before half was a killer and we didn’t overcome that. We let them get a score right there before half.”

North Little Rock took over at its own 32 and drove for a go-ahead score. On an early third-down, Cotton threw to Adaway on the bubble and he got the first down. The rest of the damage came from the running game. When they got to the 18, Cotton took over. The Hornets were flagged for making a collar tackle, which moved the ball to the 7. Three more tries on sneaks got Cotton found the end zone and a 28-21 lead.

With all the momentum on North Little Rock’s side, Butler came through with his big return that set up the tying score. 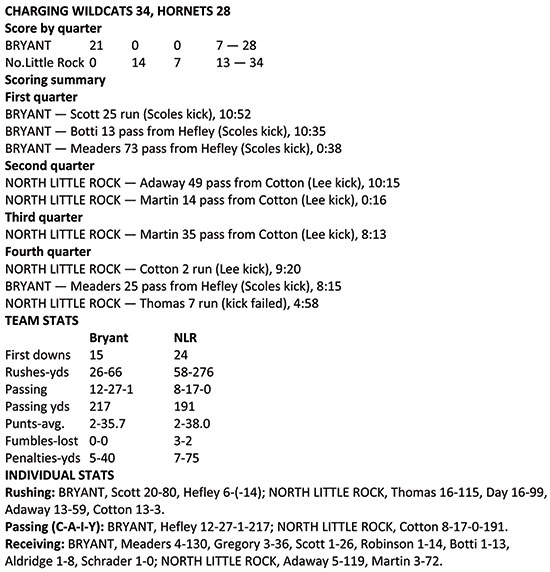