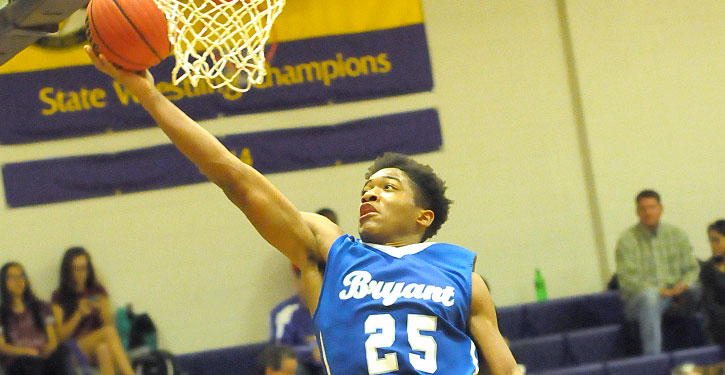 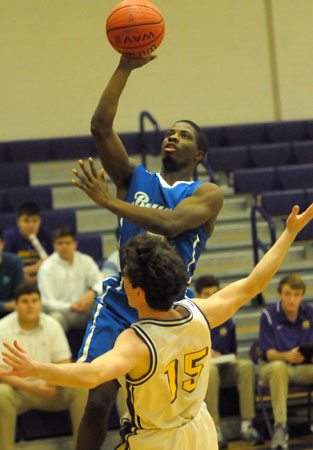 Calvin Allen goes up for a shot over Catholic’s John Chase. (Photo by Kevin Nagle)

LITTLE ROCK — Every basketball fan knows about the three-point play. Someone scores and is fouled, steps to the line and converts a free throw. And occasionally, there’s a four-point play when a player hits a 3, gets fouled and converts at the line. But, on Tuesday night in the Bryant Hornets’ 7A-Central Conference opener at Little Rock Catholic, senior guard Romen Martin had a six-point play.

Martin hit a 3 as he was knocked to the floor. A foul was called on Catholic’s Joseph Enderlin and, obviously angry with himself, he slapped the floor with both hands before getting up. That resulted in a technical foul.

So Martin went to the line and converted the free throw on the common foul then stayed there to drain two more for the technical. Six points.

Martin was on his way to a 23-point first half for the Hornets. He did not score in the second half as Bryant’s starters didn’t play much. It was 48-18 at the half and the Hornets went on to a 65-32 romp.

More than a couple of good Bryant teams have, in the past, gone to Catholic High and struggled but the Hornets were focused on Tuesday, overwhelming the faltering Rockets team. 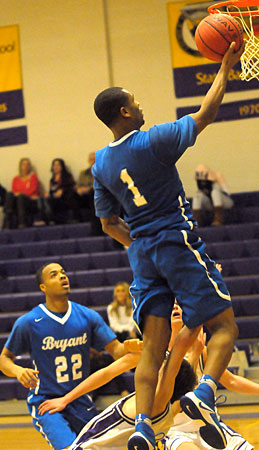 Romen Martin (1) finishes off a drive to the hoop as teammate Deron Canada (22) follows up the play. (Photo by Kevin Nagle)

“I think our team has been there enough, they know,” said Hornets coach Mike Abrahamson when he was asked if he reminded his team of those games. “We played well and I attribute that to the last two days. I know it’s only two days but, I think, it matters. How they carry themselves, how they conducted themselves in practice and the walk through.

“So I’m proud of them,” the coach stated. “I hope we can keep it up. It was kind of easy tonight — easy to take ownership because we jumped out to a big lead. I’m not saying the game was easy. We’ll see how we do with that going forward because every game’s not going to be like that.”

The road through the 7A-Central figures to be rugged. The Hornets host a talented Little Rock Central team this Friday.

In the win on Tuesday, Braylen Steen added 15 points and seven rebounds for Bryant. Sophomore Rodney Lambert came off the bench to score 7 as nine different players contributed to the scoring. 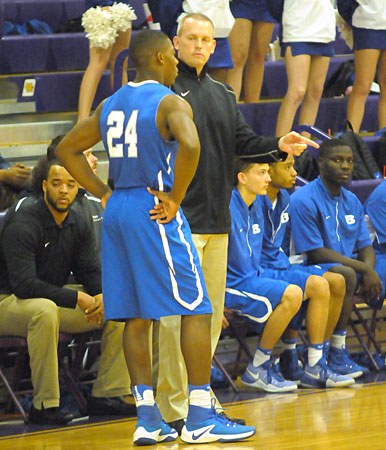 The lone Rockets lead was 4-2 on a pair of baskets by Phillip Allison who led his team with 10 points in the game. Kaleb Turner tied it with a driving jumper. Martin made a steal and Turner got a layup to put the Hornets in front to stay.

Calvin Allen followed up with a theft, taking it the distance for a layup and an 8-4 edge.

Off a Catholic turnover, Allen fed Martin for the first of his four 3’s. Moments later, his 6-point play increased the lead to 13.

Enderlin interrupted with a 3 from the left corner but Steen’s three-point play pushed the lead to 20-7. Lowell Washington added a 16-foot jumper and Martin drove for a basket before the quarter was over, making it 24-7.

Marvin Moody drove for a layup to start the second period. He added a pair of free throws after a Catholic turnover to extend the lead to 20-plus. Martin’s third triple of the half had the Hornets in command 31-7.

Jack Mathis came in off the bench to give the Rockets a boost. He scored all 5 of his points but it only cut the lead to 33-12.

Despite a 5-point surge by Steen, Catholic got back within 20 with two minutes left in the half. But a 10-0 run for Bryant after that produced the Hornets’ huge halftime lead.

Martin made a steal and fed Lambert for a layup to start that push. He then canned his fourth 3 before combining with Lambert to force a turnover. Martin connected twice from the free-throw line to make it 45-18. At the other end, Washington blocked a shot and Lambert drove for a layup as he was fouled. He completed the three-point play to cap off the half.

The Hornets started the second half with a 7-0 run and built the lead to 63-25 going into the fourth quarter, which was played with a running clock in accordance with the sportsmanship rule.

It was noteworthy that, with the reserve underclassmen in the game during the second half, the starters, all seniors, were into the game, advising their younger teammates from the bench.

“That’s something that I always want but it’s not been the way I want it done so we’ve really emphasized that lately,” Abrahamson said. “It’s just the way it should be. We need to look out for each other. We need to help each other.

“You know, these guys have heard my messages so many times that they know what I’m going to say,” he related. “I’m just trying to get them to do it themselves because it means more coming from each other.

“They played the whole game the right way,” the coach said of his team. “We made a couple of adjustments at halftime because of the lead that we had, just to be respectful. But they didn’t stop playing. They didn’t take that as a free pass just to stop doing the right things.”