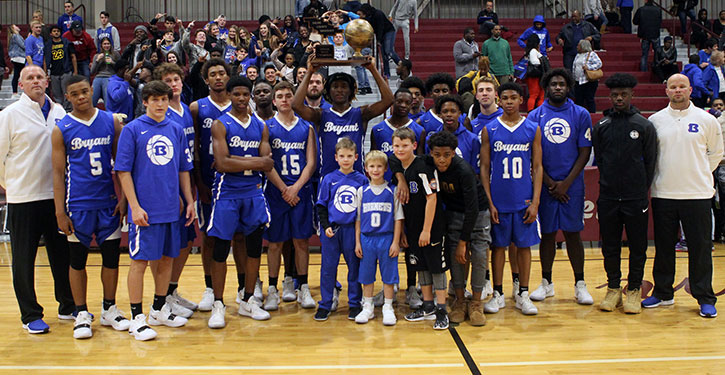 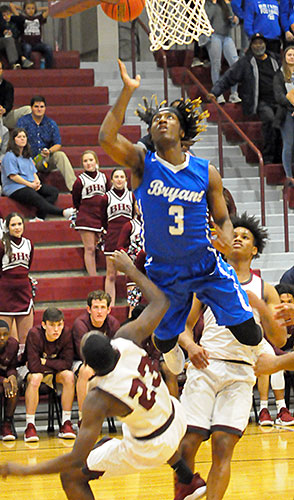 BENTON — Khalen Robinson’s first taste of the rivalry between the Bryant Hornets and the Benton Panthers came in 2016 when, as a freshman at Little Rock Episcopal Collegiate School, he attended the Salt Bowl as one of the 30,000 fans or so at War Memorial Stadium, in one of the classic games of the rivalry. The one that went right down to the wire with Bryant winning 10-7 after a tackle by Collin Welch at the 10 foiled a last-ditch effort by the Panthers.

Since then, he’s had first-hand experience with the rivalry as part of the Hornets basketball team. Robinson scored 18 points on Tuesday at Panthers Arena to lead Bryant to a 54-42 victory and the Saline County Shootout Trophy. It’s the fourth year in a row for the Hornets to claim the Shootout trophy.

“I know this is a big rivalry and everybody wants to see us play,” Robinson said after the game.

For Bryant’s lone senior Rodney Lambert, the win meant the Hornets were undefeated against their arch-rivals in his time.

“It’s a good feeling because I know they’re our rival and everybody wants us to beat Benton,” Lambert said. “So, we really just try to beat them bad, to make a statement.

“We just followed Coach’s game plan because he works very hard scouting teams,” he added, referring to Hornets head coach Mike Abrahamson. “All we had to do is just listen to him, which we did, and that’s how we came out with the victory.” 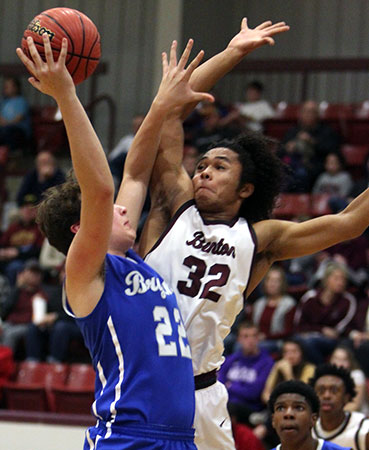 Scouting did, indeed, play a role as well as the Hornets’ ability to change defenses in the middle of a Benton possession, going from man-to-man to zone and back again.

“It’s very hard,” Lambert said of switching up on the run. “We’ve got to communicate. Whenever we communicate, we’re all one unit and we get the job done.”

“The game plan was, if they ran ‘10’, then we go into ‘zero’,” Robinson said, referring to the Bryant zone. “Coach kept calling it, what he wanted us to run on defense, and we executed.”

“We knew what they were going to run,” Abrahamson allowed. “And they know what we were going to do. We know each other very well. 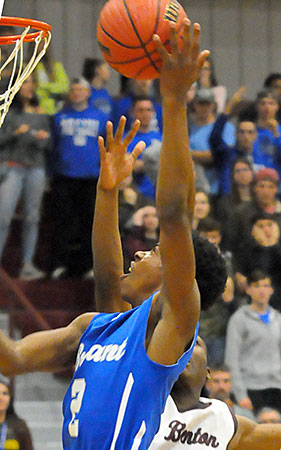 Khalen Robinson scores 2 of his game-high 18. (Photo by Kevin Nagle)

Asked about that, Robinson said the key was, “Just sticking together, staying out of the crowd, staying between the lines and playing together. And we came out with a W.”

The Hornets forced 15 Benton turnovers but also out-rebounded the Panthers 35-19. Robinson had eight boards, matching Catrell Wallace for team-high honors. The game was Wallace’s first back on the court after starring for the Hornets’ State championship football team this fall.

To go with Robinson’s 18, Treylon Payne added 15 and Lambert had 8. Freshman Khasen Robinson hit a pair of fourth-quarter 3-pointers to help the Hornets stave off the Panthers. His second trey came after Benton started defending in a box-and-one, trying to stop his brother Khalen. Benton was within 42-38 before the shot.

“It’s designed to keep me from having the ball,” Khalen Robinson said of the box-and-one defense. “But I’ve got teammates that can score too. So, we weren’t worried.”

“He’s been hurt,” Abrahamson said of Khason Robinson. “He’s been out with really bad knee pain. We just recently brought him back after we sat him out about two weeks to try to decrease the inflammation. So, he hadn’t played a game since before Thanksgiving. He’s a ninth grade and he stepped up and hit some big shots for us. He’s that kind of kid. He doesn’t get rattled.” 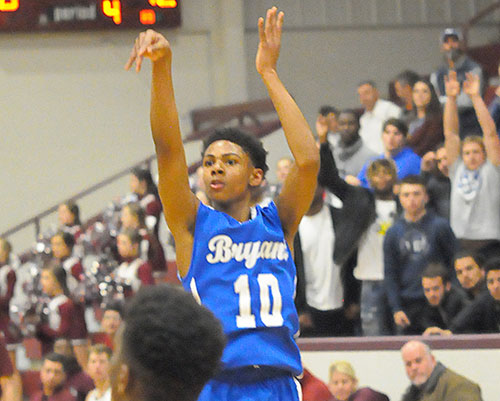 Free-throw shooting was big for Bryant. The Hornets were 20 for 25 at the stripe including 13 of 14 in the second half.

“That was huge,” Abrahamson said. “I thought we did a nice job, especially in the second half of attacking the basket, getting some shots that we wanted. Then, of course, they had to play a little bit more aggressively on defense because time’s running out.”

The Panthers, who got 14 points from Maleek McClendon and 10 from Carl Ross, started both halves well. To open the game, they grabbed a 7-2 lead with Ross canning both of his 3-pointers in the game.

Two free throws from Khalen Robinson then a three-point play by Lambert off a drive to the rack had the game tied 7-7. Camren Hunter added a pair of free throws then Payne made a steal and wound up at the line where he made it 10-7. 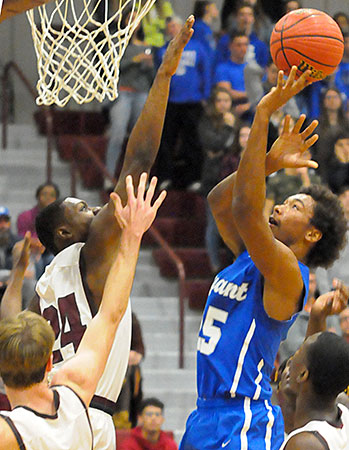 Catrell Wallace hauled down nine rebounds in his 2018-19 debut. (Photo by Kevin Nagle)

Benton’s Sawyer Oulch knocked down a 3 to tie the game but when Colby Washington hit a free throw with :02.6 on the clock, the Hornets took a lead into the second stanza.

The Hornets expanded the margin to 19-12 midway through the period. After a basket by Jalen Reed off the offensive boards for Benton, Ross got free inside and was fouled. It was ruled that when he blocked the shot, Wallace goal-tended and the result was a three-point play that had the Panthers within 2.

Baskets by Khalen Robinson and A.J. Jenkins had the Hornets ahead 23-19 going into the final seconds. At the buzzer, Benton’s Grant Shelnut hit a 3 to make it 23-22 at the half.

And when Oulch opened the second half with a 3 and McClendon added on, Benton had a 27-23 lead.

Khalen Robinson got the Hornets back on track with a triple. Lambert added a free throw moments later and the game was tied at 27.

The game was tied at 30 and Benton had two chances to regain the lead before Khalen Robinson added a pair at the free-throw line. Lambert extended the advantage with a couple of free throws. 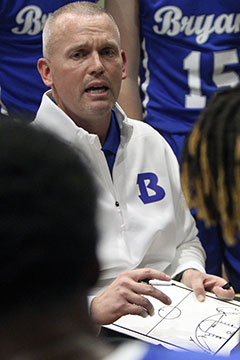 Ross interrupted with a free throw, but Payne answered with another trey. McClendon cut the lead to 4 and, right at the end of the quarter, sophomore Aiden Adams rebounded a missed three and was fouled. His free throws game the Hornets a 39-33 edge going into the fourth quarter.

“When they’re winning games, they’re in the 70’s and when they’re not winning games, they’re like in high 40’s and 50’s,” Abrahamson observed regarding the Panthers. “So, we wanted to hold that down. Now I wanted to score more ourselves. Offensively, we got a little bit better towards the end of the third and into the fourth. Offensively, we struggled the first half.”

Khasen Robinson’s first 3 increased the lead to 9, 42-33, but Benton’s Kelby Caffrey answered with a triple. The Hornets missed two opportunities and McClendon’s baseline jumper trimmed the margin to 42-38 with 5:05 left in the game.

After Abrahamson called a timeout, the Hornets turned the ball over so Benton had a chance to get even closer, but Jaden Nash missed a 3 and, at the other end, Khasen Robinson drained his second one.

With 3:17 left, McClendon converted both ends of a one-and-one to trim the margin to 5. The Panthers jumped into a three-quarter-court zone press but Abrahamson took a timeout. 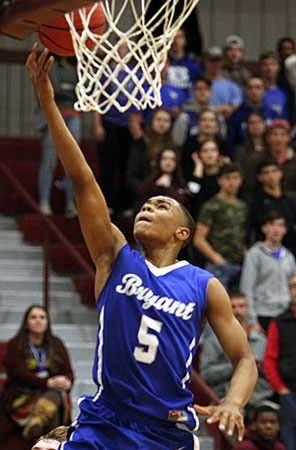 Camren Hunter goes to his off hand for a layup. (Photo by Rick Nation)

The Hornets beat the press when play resumed, and Robinson fed Payne for a 3 that made it 48-40. He followed up with a steal that led to a pair of free throws and a 10-point lead with 2:36 left.

The Hornets made the Panthers chase after that. Lambert and Robinson added free throws to offset two more by McClendon, sealing the victory.

“Our guys were pretty good tonight,” Abrahamson asserted. “Anytime you can win a close game it’s big for your guys. We need it because we’re young, a lot of our guys are inexperienced. So, we need that.

“We haven’t really had a close game,” he noted. “We’ve either kind of lost convincingly or won convincingly. So, I think this will help us moving forward.

“We still want to incorporate more people into what we’re doing,” the coach concluded. “We’re not as comfortable with some of our football players yet, especially putting them out there against a team that runs so many things and is so well prepared. You really have to be in tune with what we’re doing. We want to go deeper. We want to be a little bit more flexible defensively.”

Recalling the scouting report that played a role in the win, Abrahamson, who was intense and active on the sideline all night, said, “I just want to do my part. The kids made the plays. I just try to have them prepared and I try to be a piece of the puzzle. I didn’t make any shots. I didn’t step up in the moment. They did. I don’t look at what I did as anything special. It’s just playing my part. I’ve got a role. They’ve got a role. Our guys get all the credit tonight.”

The Hornets improved to 4-3 on the season going into this weekend’s Bank of the Ozarks/John Stanton Classic in Conway. Friday, they’ll take on Rogers Heritage at 4 p.m. Saturday, they’ll play Springdale Har-Ber at 6:30 p.m. 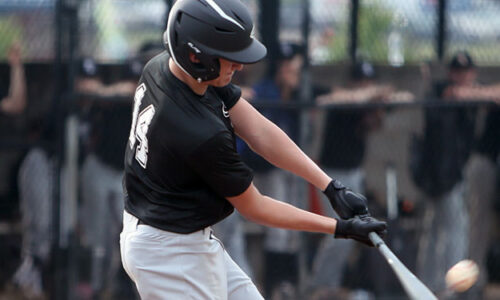