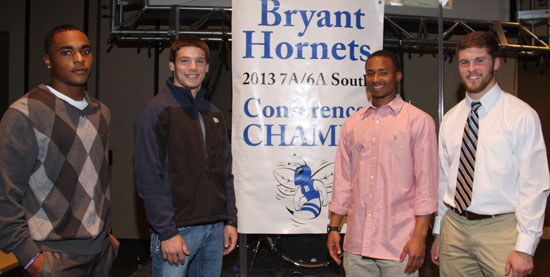 In addition, senior James Gibson has been chosen as the annual Brandon Burlsworth Award, given to the player on the team that “has shown the desire to succeed at the highest level while overcoming life’s obstacles. They must have a strong work ethic, character, and the willingness to go the extra mile.”

Burlsworth was a walk-on offensive line at the University of Arkansas who graduated as an all-American and was drafted by the Indianapolis Colts in 1999. Only days after his first mini-camp, he was killed in a car accident.

Those honors and team awards were announced by head coach Paul Calley on Tuesday, Dec. 17, at the annual post-season banquet.

Nossaman was also honored as Mr. Hornet, voted on by his teammates as “the person that ‘lives like a Champion’ in all aspects of his life and represents what a Hornet football player should strive to be.”

Nossaman who moved to linebacker from safety to start the season, returned to safety during the season and wound up as the team’s second-leading tackler with 72. He had three tackles for losses, four special teams tackles, two interceptions, four pass break-ups and a fumble recovery.

He was also one of four permanent team captains, along with Denker, Wesley Akers and Howard.

Johnson was Bryant’s leading tackler with 114. He also contributed four special teams tackles, a team-high three interceptions including one he returned for a touchdown against Benton in the Salt Bowl. He broke up six passes as well.

Along with being named All-State, Johnson was voted the team’s outstanding defensive back and won the annual Salt Bowl Press Box Award for defense.

Junior quarterback Brandan Warner was the Salt Bown Press Box Award winner for the offense, completing 18 of 24 passes for 218 yards and three touchdowns and rushing five times for 12 yards.

If there were a Mr. Versatile Award, Howard would’ve won that, playing quarterback and wide receiver. He was second on the team in rushing with 654 yards and four touchdowns on 95 attempts, completing 8 of 16 passes for 73 yards and a TD, while finishing second on the team with receptions with 22 for 312 yards and three touchdowns. He was named the team’s outstanding back.

Hunter led the team in rushing, receiving and scoring. He rushed for 718 yards on 68 totes and caught 34 passes for 507 yards. He scored 96 points with seven runs and nine receptions for touchdowns. He was named the outstanding receiver for the team.

Kurt Calley, the team’s center, was named the team’s outstanding lineman. He and Davis, the team’s left tackle, helped the offense produce 3,455 yards.

Denker was named the outstanding linebacker as the third leading tackler with 62 including two special teams stops. He had an interception, two fumble recoveries and broke up four passes.

May, a defensive end, led the team in tackles for loss with five and sacks with seven. He made 40 tackles altogether and broke up a pass. He was selected as the team’s outstanding defensive lineman.

Tipton, a cornerback, was tabbed as the special teams MVP with three blocked kicks and four special teams tackles as part of his 34 overall. He had two tackles for loss, an interception, and led the team with eight pass break-ups.

The 12th Man Award given to a valuable supporter was bestowed on Kim Akers.

Calley took the opportunity to thank his assistants and their wives along with the training staff and managers.

In particular, the coach expressed his gratitude to volunteer coaches Cody Williams, Robbie Aldridge and Bobby Gentry along with Friday night filmer Ricky Trotter and friend of the program Jason Kindrix.

The Hornets won the conference with a 6-1 mark that included three straight shutout wins and 18 consecutive scoreless quarters. A 21-17 win over El Dorado in the final regular-season game clinched the title.

After enjoying a bye in the first round of the playoffs, Bryant, which finished 7-4 overall, concluded the campaign with a 28-7 loss to North Little Rock in the Class 7A Playoffs.