PINE BLUFF — Beating Pine Bluff 20-1 in a season-opening benefit game had its, um, benefits but the Bryant Hornets undoubtedly got much more out of Tuesday’s come-from-behind 6-5 win in extra innings over the Watson Chapel Wildcats was far more valuable.

The Hornets trailed 5-2 after five innings but rallied for a run in the sixth and two in the seventh to send it to extra frames. In the ninth, Brennan Bullock’s hustle helped produce what proved to be the decisive run. First, Bullock beat out a grounder in the hole at short for an infield hit with one out. He then swiped second before Jordan Taylor flew out to left. And, with two down, Bullock was running all the way when Brady Butler hit a high pop into the wind on the infield. When Watson Chapel’s third baseman Ryan Bowlin dropped the ball, Bullock was well on his way to the plate.

And senior right-hander Ben Wells, who had come in to relieve starter Blake Davidson in the fifth, finished a shutout stint of 4 1/3 innings to nail down the victory.[more]

It wasn’t an easy home ninth, mind you. Taylor robbed Colin Massenelli of a single with a diving stop at shortstop that included adjusting to a bad hop. But his throw to first was wild and Massenelli wound up at second. Wells then hit Ryan Dardenne. The next batter, Trey Moser, squared to bunt but Wells wheeled on Massanelli at second and caught him wandering too far. The Hornets executed the rundown for the first out of the inning, though Massenelli stayed in it long enough to allow Dardenne to reach second.

Wells, however, fanned Moser then got Josh White to bounce out to Lucas Castleberry at third to end the game in scintillating fashion.

“I felt like they had to bunt in that situation,” noted Hornets head coach Kirk Bock, regarding the pickoff play. “We got lucky that they didn’t execute it very well.”

It was the second pickoff by Wells in the game. The Wildcats also lost a runner at the plate on a nifty relay from Caleb Garrett in right to Butler, as the cut-off man, to catcher B.J. Ellis in the bottom of the fourth.

“I tell you, when you get started and you fight back the first rattle out of the box, it’s huge,” Bock acknowledged regarding the victory. “Very easily, we could’ve died down when we were down two in the seventh.”

Bullock was the instigator in the seventh as well, beating out an infield hit and drawing a wild throw to first that allowed him to take second. A balk got got him to third for Taylor who lifted a sacrifice fly to left to cut Chapel’s lead to 5-4.

Butler fisted a bloop single to right and sprinted to third when Castleberry slapped his third hit of the game to right.

Bock called on speedy freshman Hayden Daniel to run for Castleberry as Landon Pickett came up to pinch-hit. The count went to 1-2 on him then Daniel left early from first, stopping halfway to second to try to draw a play from pitcher Hunter Colson.

And Colson stepped off the mound and started at Daniel, trying to get the third out before Butler could score. But Daniel did a nifty job of staying in the rundown long enough for Butler to sprint home, tying the game.

“We work on that stuff almost every day,” Bock noted, “and (Daniel) did great, especially for a young kid. I felt good about our chances there because we had speed at the corners. I felt like earlier in that inning I should’ve made a move and I didn’t. Hindsight’s 20-20 but, you know, it was big. He has baseball savvy. This whole group, they know how to play.”

Wells, who gave up just two infield hits in his stint on the mound, worked a 1-2-3 home seventh, notching two of his seven strikeouts.

Bryant had a chance to win it in the eighth when Ellis drew a one-out walk and courtesy runner Jimi Easterling stole second. He had to hold up, however, when Chris Joiner singled through the left side. With runners at the corners and one of his best bunters up in Garrett Bock, the head coach called for a safety squeeze. Bock got the bunt down and made Bowlin at third field it. But Easterling didn’t get a good break from third when Bowlin made his commitment to throw to first. A relay home after the out was recorded at first was just in time to retire Easterling, ending the inning.

Wells hit a batter and walked another in the bottom of the eight but struck out Bowlin with runners at second and third to keep the game going.

Both teams scored in the opening inning of the game. Bryant’s offense came after two were out. Hunter Mayall doubled to left and, after Bullock was hit by a pitch, Taylor lashed an RBI double down the line in left. Butler made a bid for extra bases and two runs batted in but his liner to right-center was speared by Massenelli from with a lunge as roamed from center field.

In the bottom of the inning, Colson beat out an infield hit but was forced at second on a tap to third by Bowlin. Massanelli drew a walk from Davidson who struggled to nail down the strike zone early on. He walked his counterpart Ryan Dardenne to load the bags. Moser’s sacrifice fly tied the game then White plugged the gap in right-center for a two-run double to make it 3-1.

Davidson settled in after that, working around a single in the second, thanks to a doubleplay off a liner to Taylor at short.

“I thought Blake did a good job after the first inning,” Bock commented. “He struggled a little bit trying to find the zone that was being called. When I went out to talk to him, I said, ‘You just can’t worry about that. You’ve got to through yours and if it’s not there, it’s not there. But you’ve got to get into a rhythm.’ And I think that hurt him a little bit. Then afterwards, he got up to around 70 pitches. He got through five. He’d throw intersquads at four but he hadn’t thrown over 50 pitches. So we were stretching him out a little bit. I told him we were going to go with him as long as he could. Then we were going to bring Ben in for the sixth and seventh, regardless. So, it worked out pretty good. He did exactly what we needed him to do.”

After Davidson worked around a walk in the third, the Hornets trimmed a run off the lead in the top of the fourth. Castleberry singled to right, Garrett sacrificed him to second then Ellis reached when a throw from third got past first baseman Caleb Kelley, allowing Castleberry to score.

Daniel, running for Ellis the Bryant catcher, reached second on a misplayed pick-off attempt then took third on a wild pitch but was stranded.

In the bottom of the inning, Kelley drove a one-out double over the head of Garrett in right. But when Justin Dardenne followed with a single to right, Garrett came up firing and the relay from Butler cut down Kelley at the plate.

Colson walked but then Davidson got out of the inning with a strikeout.

Colson relieved Ryan Dardenne in the fifth and worked around a two-out single by Taylor. In the home fifth, Davidson issued his fifth walk and, with two down, a pitch away from ending the inning, he was victimized by a grounder-with-eyes that slipped through the left side of the infield for a single. A pitch later, Wesley Bumpas pulled an RBI single into right to make it 4-2.

“I kicked myself for not moving Butler over a little bit at first and that ball wouldn’t have got through,” Bock related. “But that’s just one of those things.”

Wells relieved and uncorked a wild pitch that allowed White to score before he struck out Kelley to end the inning.

The Hornets got started on the comeback in the top of the sixth. Castleberry pulled a single into left and, an out later, Ellis was hit by a pitch. Joiner followed with a grounder to short. The Wildcats got the force at second but a relay to first was wild allowing Castleberry to come home with Bryant’s third run.

In the bottom of the inning, Justin Dardenne reached on an error but Wells picked him off first after he’d struck out Colson. Bowlin beat out an infield hit but Wells fanned Massanelli to set up the seventh-inning rally that tied it.

Along with Castleberry’s three hits, Bullock and Taylor had two apiece. White and Bumpas each had two for the Wildcats.

In a three-inning JV game that allowed a maximum of three runs per inning, the Hornets nearly maxed out in an 8-2 win. Tyler Brown had two hits including a two-run double in the first. Daniel had walked to start the game then scored all the way from first when Evan Jobe’s sacrifice bunt drew a wild throw to first. Jobe wound up at second. With one out, Jobe took third on a wild pitch. Cameron Price drew a walk and stole second ahead of Brown’s two-out two-bagger.

Chapel managed two runs in the bottom of the inning against Pickett who settled down after that to fan four and work around a trio of hits.

In Bryant’s second, Josh Pultro singled and Dylan Cross walked. A force at third erased Pultro but allowed Ozzie Hurt to reach. Daniel followed with a two-run single to center. A stolen base and a wild pitch had Daniel at third with two down when Pickett helped his own cause with an RBI single.

In the top of the third, Price walked, advanced on a passed ball and scored on a double by Caleb Milam. Brown singled and, an out later, Cross delivered a sacrifice fly to bring Milam home, setting the final score.

Bryant returns to action on Friday at home against Lake Hamilton with the varsity game starting at 5 and a JV contest to follow. The Bryant B team is set to host White Hall in a doubleheader on Thursday starting at 4 p.m. 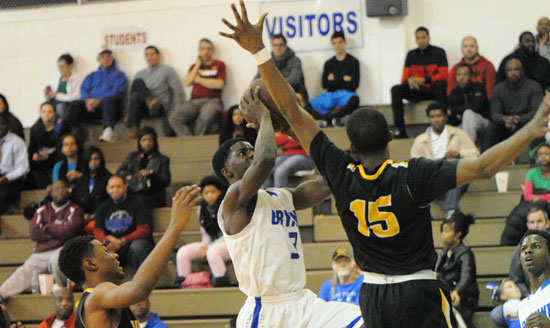