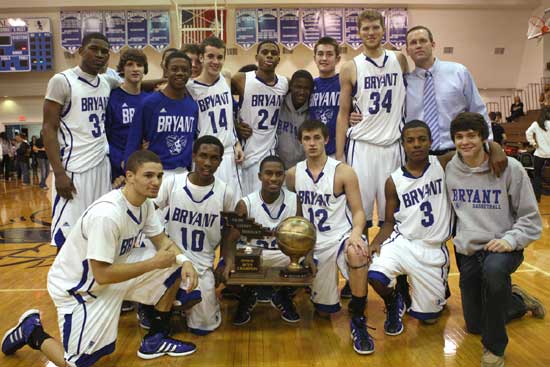 For the first time since the Saline County Shootout trophy was added to the Bryant-Benton rivalry in[more] 2006, the Hornets have claimed it for Bryant High School with a 56-48 win over the rival Benton Panthers in a jam-packed Hornets Nest Friday night. 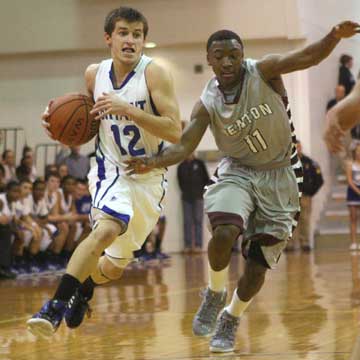 And, coupled with Bryant’s 48-39 win at Benton on Nov. 22, it’s the first time since 2001 that a Hornets team has swept the season series with the Panthers.

In the fourth quarter, the Hornets hit 5 of 6 shots from the field including three crucial buckets by sophomore Anthony Black, and knocked down 7 of 10 free throws to preserve a lead they established from the outset thanks to hot long-range shooting from Brantley Cozart and Marcus Wilson.

Cozart finished with 18 points and seven rebounds, fellow senior Jordan Griffin added 10 and junior Leon Neale came off the bench to pitch in with 10 points and 10 rebounds for Bryant.

Benton, sparked by point guard Nate Griffin who had 17 of his game-high 20 points in the second half, got within 5 points down the stretch but could get no closer after that. 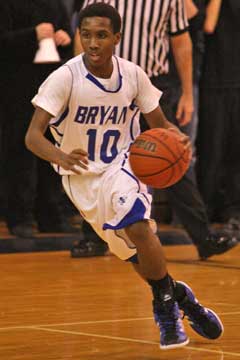 The coach made special mention of his bench.

“Our reserves, especially the guys that didn’t get into the game tonight, have pushed our first-teamers so hard in practice,” he explained. “They have committed to making our main guys better. They deserve a ton of credit for what we did tonight. They are really valuable to our team. And they might not show up statistically or they might not get their name in an article but I want to name them. Mitch Scoggins, Brian Reed, Greyson Giles, Luke Rayburn — Luke’s been incredible in practice — Strodney Davis who’s been incredible in practice, Travis Royal, Logan Trudell who did get to play a minute tonight; and then two guys that didn’t even dress out for us on varsity, Caleb Strain and Cedarrian Crosby.” 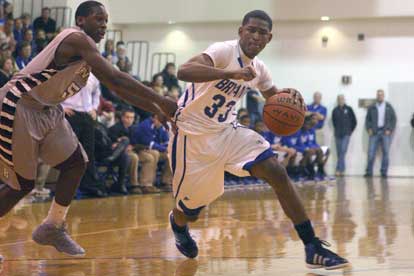 Though only in his second year at Bryant, Abrahamson is fully aware of the significance of the victory.

“It is big,” he commented. “It’s very stressful to coaches, how much is put on this game or games. (Benton) Coach (Chris) Nail and I were talking about that before this game. Everyone else makes such a big deal about this game, you don’t have to fire (the players) up for it. You really have to bring them down a little bit. 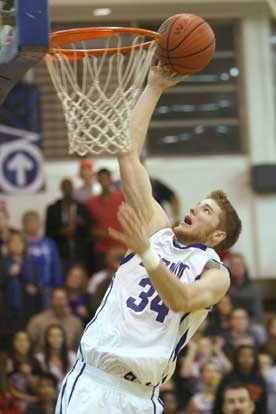 The win improved the Hornets to 4-3 going into a pair of games in Jacksonville against North Pulaski and the host team of Red Devil Classic.

Though they didn’t torch the nets like they did at Lake Hamilton on Tuesday when, in the first half, they knocked down 84 percent of their shots, the Hornets started strong on Friday. Benton’s 6-8 Graham Gardner scored off the tip to give his team the upper hand right away but, after Cozart hit a 3 and Nate Griffin drove for a bucket, Wilson drained a triple to make it 6-4.

Benton never led again and Gardner, who failed to score against the Hornets in their first meeting, had the only 2 points he would get in this one.

Cozart would hit two more treys to produce a 14-5 lead and a timeout by Nail. When play resumed, Neale made a steal and a layup to get the Hornets revved up again. Quinton Allen scored off a back-door cut but when Wilson beat the buzzer with his second troika of a drive-and-kick by C.J. Rainey, Bryant had a 19-7 lead.

To start the second quarter, Neale hit the offensive glass for a bucket. Allen countered for Benton but a three-point play by Neale as he followed his own miss then a driving jumper by Cozart produced the largest lead of the game at 26-9.

Back-to-back three-point plays by Allen and Thaddeus Caffery helped Benton get within 30-18 at the half. 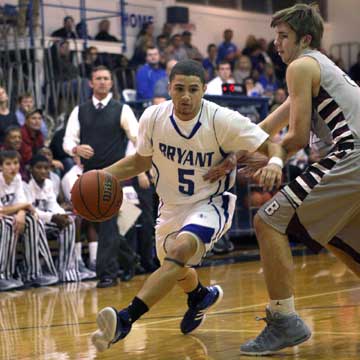 “We got a little passive in the second quarter, which was a characteristic of our team late last season that we don’t want,” Abrahamson observed. “That didn’t happen on Tuesday and I think it was because we were able to pressure (Lake Hamilton).”

Behind 7 points from Nate Griffin, the Panthers trimmed the margin to 35-31 in the third quarter. The Panthers had a chance to get closer but turned the ball over. When Jordan Griffin drove for a three-point play with :01.8 showing, Bryant held a 38-31 advantage.

“Nate Griffin was unstoppable,” asserted Abrahamson. “And I think that changed our players’ mentality for a little bit because of how aggressive he was. We were having trouble keeping him in front, playing our man-to-man defense. And I thought that took a little bit of us offensively.”

To start the fourth quarter, the Hornets, playing much of the game with four guards, spread the floor and opened up the lane. Black took advantage with a pair of drives. On the first, he hit a pull-up floater over the looming Gardner. After Bryant’s 6-7 senior Quinton Motto took a charge to regain possession, Black drove to the rack and hit a scoop shot to give his team its double-digit lead back at 42-31. 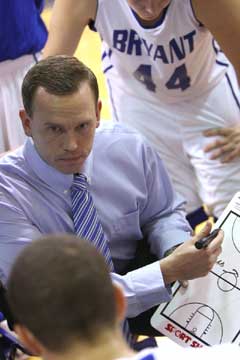 “It’s one of the adjustments we’ve tried to make since the Russellville tournament,” Abrahamson explained. “Putting the ball in (Black’s) hands more and putting some of the guys that used to have the ball in their hands, off the ball. It just changes things up a little bit. It’s a new thing (for opponents) to prepare for and it takes some pressure off some people. It’s just getting people in different spots where I think they can make some plays for us.

“(Tuesday) it was C.J. Rainey who stepped up as a sophomore guard and, tonight, it was Anthony Black,” he acknowledged. “We’ve been waiting for him to have a breakout game and he obviously had a big impact on the game tonight — three big buckets.”

But the speedy, whirling Nate Griffin resumed his attack on the Bryant defense. After back-to-back hoops then a turnover, Abrahamson called a timeout with 6:17 to go. Neale made another steal and Black, once again, took advantage with a drive into the paint and another floater that nestled into the net.

With 5:34 left, Caffery converted a pair of free throws and Benton took a timeout. When Black misfired at the other end, the Hornets settled back into a match-up zone instead of the man-to-man. Though Caffery drove for a bucket to cut it to 44-39, the Panthers struggled over the next 2:30. Bryant took advantage as Black drove and kicked to Jordan Griffin, who buried a clutch 3. And, after Nate Griffin couldn’t get a 3 to fall, Cozart drove, drew the defense, then slipped a pass inside to Neale for a layup making it a 10-point game again.

“We were having so much trouble with penetration,” Abrahamson said of the defensive switch. “With Quinton (Motto) being able to play, which was unexpected, and Zach (Cambron), which was unexpected — with them back in the game and with how well (the match-up) worked the last time we played Benton, we went back to it to try to switch it up. That seemed to slow them down a little bit just enough to give us some room to make some plays and get some stops.”

Ricky Gipson ended Benton’s dryspell with a 3 and the Panthers called timeout with 1:58 to go.

With 1:55 left, Black was fouled, going to the line for a one-and-one. He converted the first and, though the second one missed, Neale found a way to get to the carom and kicked the ball back outside so the Hornets could milk some more clock. Cozart was fouled with 1:31 left and converted the first two of the five he would knock down the rest of the way to sew up the victory.