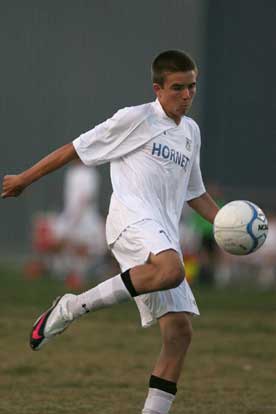 CABOT — The Bryant Hornets soccer team is hot at the right time.

On Thursday, April 22, the Hornets won their fifth straight match, their sixth in the last seven, with a 1-0 win over the Cabot Panthers.

It was the team’s 13th shutout of the season as they improved to 14-7 overall and 8-5 in the 7A-Central Conference going into the regular-season finale on Monday against North Little Rock when they’ll celebrate Senior Night at Bryant Stadium.

In their victories, Bryant has now outscored its opponents 27-1.

“I don’t think we played our best game but a win is a win,” stated head coach Jason Hay. “Cabot out-hustled us in the first half and gave us all we wanted.”

The win also put the Hornets in position to earn the third seed from the 7A-Central to the State tournament. With a win over North Little Rock and a victory by league-leading Russellville over rival Conway, the third seed will belong to the Hornets.[more]

Thursday’s contest was a scoreless tie at the half. 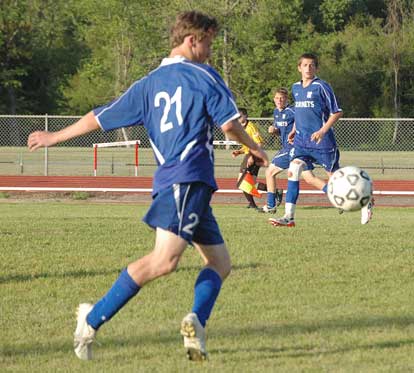 “We had a scare with about eight minutes left in the game when Cabot scored,” Hay recounted. “But they were clearly offsides.”

That took the point off the board. Moments later, Bryant senior Sean Sobba pressed the goal.

“Sean got behind Cabot’s back line into the 18 and was dragged down from behind by a Cabot player to stop what would have been a sure goal,” Hay said.

That set up a penalty kick that senior Tyler Salminen put into the corner of the net to give Bryant the lone goal of the game.

The Bryant junior varsity also came out victorious, 3-1, improving to 7-2 on the season.

Chase Stuart had two goals. Ryan Watson got the third off an assist from Fransisco Zamora.