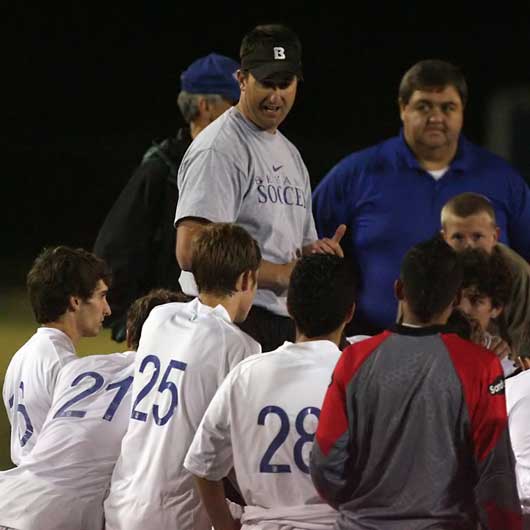 If I was able to choose only one word to describe the game the Bryant Hornets played against the Conway Wampus Cats on Tuesday night, it would have to be "intensity."

But, luckily, I get to use more. Words like "determination," "heart," "fortitude," and "class" belong in there as the Hornets pinned a 3-0 loss on the Cats to pull into a tie for third place in the 7A-Central Conference going into a match at Cabot, one of the two teams ahead of them in the standings on Thursday.[more] 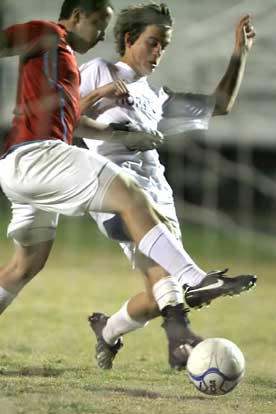 The win earned the Hornets a sweep of the Wampus Cats in their home-and-home contests and thus the tiebreaker if they remain tied going into State.

Tuesday night was the essence of what being a Hornet is all about, being able to leave everything you have inside of you on the field, playing the game like it might be your last, being able to fight the player against you for 80 minutes and still slap him on the back afterwards to say "good game."

That is what "Hornet Pride" means. It is just not a phrase to toss around inside a huddle before a game or a slogan to put on a shirt. It is a commitment you make when you put on the white and blue.

The team worked as one. Players stepped up and took charge. Jonathon Lowery, Brandon Parish and Tyler Salminen took a lot of the pressure off of keeper Jace Denker, who ended the night with four saves. Reed Evans and Parish defended well inside the box, heading and clearing out balls when needed.

The speed from Lowery, Jesse Wolf and Carlos Gracia was unmatched. They were able to track down a ball 20 yards in front or behind and get to it with Conway players all around.

At 20:57 in the first, Jesse Wolf had a beautiful shot go just a few inched high. The first goal of the night came from Sean Sobba. It was a goal that came from determination and desire. He pressured the Conway keeper all the way to the end and came out ahead at 16:05 left in the first.

Fabian Ruthardt and Ben Stukenborg never let up and were always on the lookout for a Wampus Cat mistake.

The second goal came at 11:32 in the second half on a penalty kick from Salminen.

The last goal of the night was by Sobba who, again, never gave up and pressured the keeper to the very end. The Conway keeper ended up missing the ball and Sobba was there to pounce on it and get the easy goal.

"You might pressure the goal 30 times and nothing ever happens,” noted Hornets coach Jason Hay. “But he did like he was supposed to and you can see what happened. He was rewarded for it." 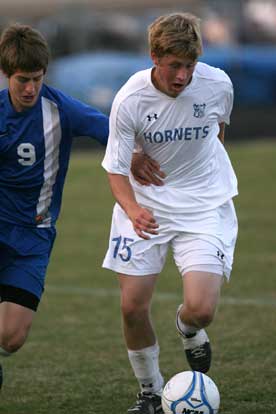 In the last five minutes of the game, Sobba was able to sit and rest. Marshawn Hood came in to fill in his place and was doing to same thing, flying to the ball and keeping up the pressure on the Wampus Cat keeper.

Ten shots were taken against Conway.

"We played our guts out,” Hay stated. “We hustled and played the way we play and I'm proud of them.

"Now we have to look towards Cabot on Thursday,” he added. “They have been our Achilles heel and I'm looking forward to the challenge."

Tuesday’s win was the boost of confidence they needed. If the same team that played Tuesday night shows up in Cabot, the Hornets, now 13-7 overall and 7-5 in the conference, will come away the victor.