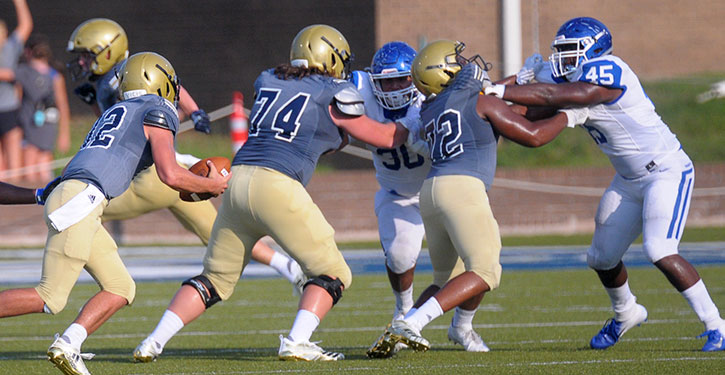 With the return of starting defensive linemen Kajuan Robinson, Nate Wallace and Josh Salguerio plus middle linebacker Jakob Neel and outside linebacker Jake Wright, the Bryant Hornets were expected to be strong in their front seven on defense.

The question mark going into the season was the secondary, where only starting corner Andrew Hayes returned with a great deal of varsity experience.

But, in their preseason scrimmage at Pulaski Academy, the Hornets forced eight turnovers including three interceptions to one of those new starters, Tamaurian “T-Bird” Wilson.

He joins Hayes, senior Jabin Gulley and junior Derek Rose in the secondary under the guidance of new defensive coordinator Quad Sanders.

“T-Bird had a big game for us against P.A.,” Sanders acknowledged. “We’re actually looking for more leadership from him.

“Rose hasn’t played as much in the past, but he’s really stepped up in camp,” he noted. “He’s looking to have a big year.

“We’re going to lean on our two older guys — Jabin and Andrew — to kind of anchor our defense for us on the back end, show some leadership for us,” the coach explained. “As for the other guys, they’re really holding their own.

“Communication is the key for us, though,” he noted. “If we can communicate and execute as far as coverages and getting lined up, I think we can play football with anybody. At times, the youth shows. They forget to communicate and get caught up in the moment but, when they don’t, it helps them get comfortable, then they can play, they can play really fast.

The front seven took a hit when Neel was knocked out early in the summer with a torn ACL. He was the team’s leading tackler as a sophomore and a junior.

“Losing a guy like Jake Neel was, at first, really detrimental because of his experience and his guidance and the comfort we had with him,” said Hornets linebackers coach Travis Queck. “Getting Jake Wright back brought some stability but, what the injury forced me to do is get guys ready. It wasn’t any one guy. It was about five or six guys.

“If you look back to last year, when we were losing linebackers, we didn’t have answers,” the coach recalled. “I feel very confident throwing in a handful of guys at any one of those positions. So, in essence, we’ve built depth. And, not looking too far in advance, the future’s bright.”

Neel may get back by mid-October, which would only strengthen the linebacker corps.

Wright plays Rover with Tristan Sehika backing him up. To bolster the middle, junior running back Ahmad Adams was moved over. Catrell Wallace plays at the hybrid Lion position but, along with Daylon Land, can me moved into the middle.

“Cameron Scarlett can give us some reps there too,” Queck said of the middle linebacker spot.

“And, I’ll tell you, sophomores Hart Penfield and Koby Melton are not far behind,” he asserted. “Hopefully, midway through the season, we can have those guys ready to go.”

Joining Wallace at defensive end will be junior Austin Bailey. Kennedy Miller, Michael Chatman and Rodricho Martin will see time at the ends as well. Kyle Green can play end as well but will begin play as a tackle behind Robinson and Salguerio, along with David Shifflet and Kendrick Miller, according to Hornets defensive line coach B.J. Shuller.

“The older guys are very experienced,” Shuller said. “The starting four, the junior Austin Bailey has been for two years. The other three have played for three years. Then, the other guys are kind of young. We’re bringing them along, but they’ve got great leadership in front of them with those four guys.

“They’re very strong, physically and mentally,” the coach said. “That’s good. That’s what you want. They’re good against the run and the pass.”