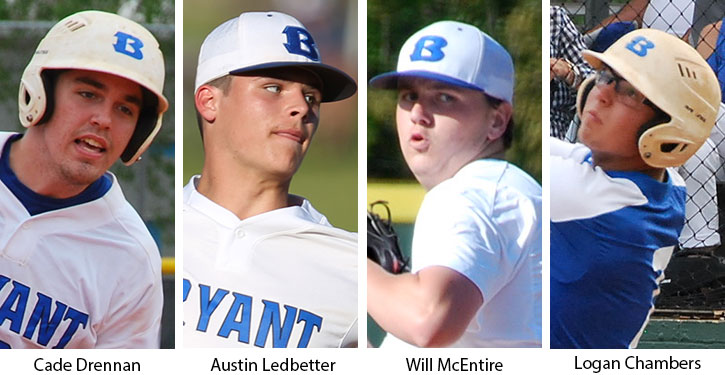 Seniors Logan Chambers and Will McEntire have been named to the Arkansas Activities Association All-State team while each was joined by sophomore Austin Ledbetter and junior Cade Drennan on the coaches’ All-State team for the Bryant Hornets.

Post-season honors for the Hornets, champions of the 6A-Central Conference, were announced on Wednesday. The Hornets finished 27-5, absorbing a stunning loss in 10 innings in the second round of the 6A State Tournament to eventual State champion North Little Rock, which won the title despite finishing with a losing record for the season.

In addition, Chambers was named to the All-State Tournament team. He and McEntire have been tabbed to play in the Arkansas High School Coaches Associations’ annual All-Star game at UCA on June 21. They’ll play for the East team with Hornets coach Travis Queck serving as the head coach.

Drennan, Stark, Dillon and Will Hathcote have been selected for the Xtra Inniings Showcase in Jonesboro this summer.

Here are the final unofficial stats for the 2019 Hornets: