Hornets do it again, chase down Conway late for vital victory

At halftime Tuesday night, the Bryant Hornets had three starters on the bench in foul trouble and[more] trailed the Conway Wampus Cats 22-19. 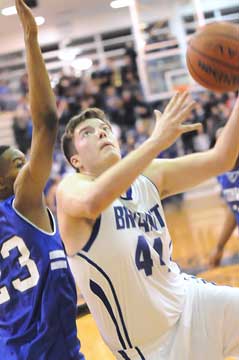 They had ‘em right where they wanted ‘em.

Last month, the Hornets rallied from a 16-point deficit early in the second half to stun the Cat in Conway. While they didn’t have to come back so far this time, they turned the trick anyway, surging to a 54-41 victory that thrust them into sole possession of third place in the 7A/6A-Central Conference and, with three games left in the regular season, inched them closer to clinching a spot in the Class 7A State Tournament.

Conway, which came in tied with the Hornets at 5-5 in league play, dropped a game behind Bryant — effectively two games because with a first-ever sweep of the Cats, the Hornets have the head-to-head tiebreaker.

The second half of that game at Conway may have been the best half of basketball the team has played all season but, considering the quality of the Conway team, the stakes and the adversity, Bryant head coach Mike Abrahamson acknowledged it was one of his team’s best performances of the season.

“From start to finish, about as good as we’ve played,” he said. “That and the Benton games, when you talk about good teams. We’ve had some good games from start to finish but against really quality teams that’s right up there. 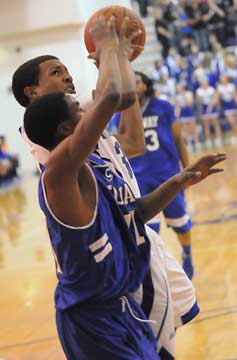 “Our student section tonight — Conway brought some people and they were trying to overtake our students and our students wouldn’t let them,” he mentioned. “It was a great atmosphere and I just want to thank everyone who came out and supported us and made it the atmosphere it is because it hasn’t always been like that and it helps.”

The Hornets actually didn’t gain the lead until the fourth quarter. A 12-foot jumper by Conway point guard Tim Boyd had his team up 36-32 at the start of the final period. Bryant’s Quinton Motto was fouled on a play that resulted in an injury to Conway’s Everett Reed, who led all rebounders with seven, though he would not return to the game.

Motto hit a free throw and, after an illegal screen cost Conway possession, Brantley Cozart converted at the line to trim the margin to 36-35. Boyd missed and, at the other end, Motto, from the post, kicked the ball outside to Jordan Griffin who pumped in a 3-pointer that put the Hornets ahead for the first time early in the third quarter.

Conway lost post man Xavier Clardy with an ankle injury on the go-ahead play. Once play resumed, Kevin Guiden misfired for the Cats and, in turn, Cozart and Motto worked a give-and-go to perfection. Motto scored and was fouled. With the free throw it was 41-36. 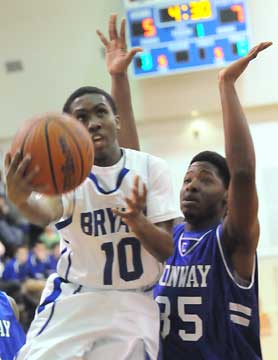 The Cats missed two chances to answer before Griffin got a layup off a nice back-door cut with Cozart getting another assist. With Bryant suddenly ahead 43-36, Conway needed a timeout.

Though Trent Walder hit a 3 when play resumed, the Hornets closed out the win with Anthony Black, Cozart, Marcus Wilson and Motto hitting free throws as the Hornets finished with an 11-2 rush.

“We ran more sets tonight and they executed those sets so well,” Abrahamson said of his team at the offensive end. “If I called something, they executed it and we scored off of a lot of things that I called. We didn’t score coming out of the half but it seemed like every time I called a set where we know where we’re going, we executed and scored.

“I was really proud of that because we’ve had games where we haven’t done that including last Friday (at Russellville),” he noted. “It’s just a focus thing. We were able to get some great shots. When you’re making layups and getting to the free-throw line and making free throws, the confidence is up. 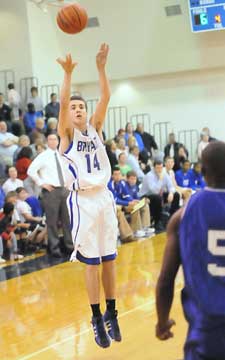 “And we were getting stops,” the coach continued. “We did such a better job on Boyd. He’s such a good player, such a tough match-up. In the first half, we started off in man but, if you give him any sort of daylight, you can just count it.

“We went to the match-up zone and, especially the second half, we did such a better job of knowing where he was and making it harder on him. They were trying to set ball screens up top and our strategy was to make him refuse the screen, don’t use it, making him go back the way he’s coming from. We didn’t always get that but, if we didn’t get it, we made him really take it out further and he couldn’t get the looks he wanted. Our guys did such a good job, especially (Logan) Trudell and Wilson.”

Black wound up leading the Hornets with 14 points. Griffin had 10, Motto and Zach Cambron 8 each.

With Cozart, Black and Motto in foul trouble in the first half, Cambron was one of those that came in off the bench and helped keep the Hornets in the game.

“Cambron steps up, Trudell steps up, (C.J.) Rainey steps up, (Greyson) Giles steps up — and I’ll tell you, I’m not surprised,” Abrahamson stated. “Because that’s how I see them. I seem them as capable, quality players. I’m happy for them and I’m glad to see it come out the way it came out and see them play well but I’m not surprised because I have confidence in them. I know that they can if they’re confident. If they will play the way I know they’re capable of playing then there shouldn’t be much of a dropoff. It might be a little bit of a different team. It’s just getting our reserves, our young guys to realize how good they can be and even how good they are now. And to play with that confidence.” 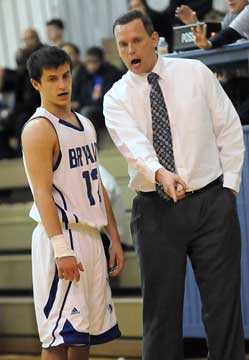 The coach reserved his highest praise, however, for Wilson, the shortest player on the court but, fittingly on Valentine’s Day, perhaps the one with the biggest heart.

“Marcus Wilson is a winner,” Abrahamson declared. “He is a competitor. I don’t know that I’ve coached someone with his mindset before. To see him do what he does out there with his size, it’s just amazing. I mean he really sets the tone out there. He’s taking the ball from people. He’s coming up with loose balls. He’s going up and rebounding against guys that are a foot taller than him. He is so important to our team. I cannot overstate that. He is an amazing young man, such a competitor.”

Motto picked up his second foul with the Hornets up 5-4. It was 7-7 when Black was hit with his second. Garan Davis scored to snap the tie but then Trudell bombed a 3 to give Bryant the lead again.

Boyd answered with a trey and, after Griffin hit a free throw, Guiden knocked down a jumper to make it 14-11. The Hornets missed a chance to answer but got another when Giles made a steal and Griffin fed Cambron for a basket with :04 left in the quarter to make it a one-point game going into the second.

Cambron scored again after Conway had pushed the lead to 18-13 early in the second. Griffin and Davis traced free throws then Rainey drove into the lane and scored as he was fouled to make it 20-19. A late bucket by Reed had Conway up 22-19 at the break.

To start the third quarter, Motto fed Black for a layup after he cut to the bucket off a nice back-screen. Two free throws by the Bryant post player gave the Hornets a 23-22 lead that lasted only seconds.

It went back and forth the rest of the quarter with Conway taking a 34-32 lead into the fourth. Scoring by Black and Cambron helped keep the Hornets close before the fourth-quarter push.

Bryant plays at Cabot this Friday. It’ll be the Hornets’ first chance to see the new arena there, a place they’ll hope to see again soon. You see, that’s where the Class 7A State Tournament will be held.