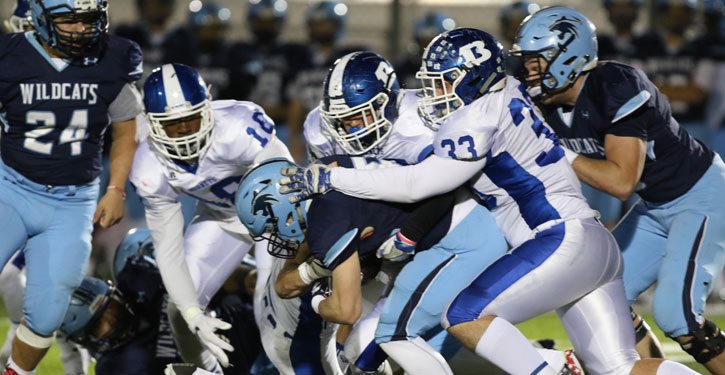 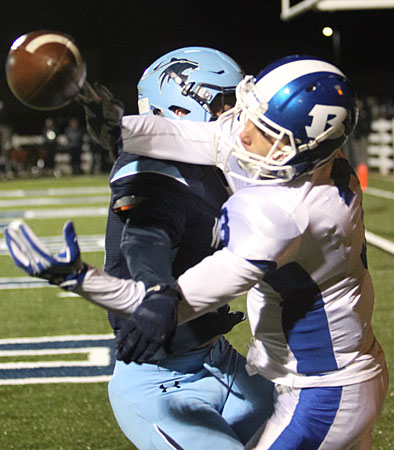 Reece Coates reaches back through a Har-Ber defender to make a circus catch. (Photo by Rick Nation)

SPRINGDALE — Bryant Hornets football history was made Friday on a cold, blustery night at Har-Ber High School, a long way from home.

For the first time in the 67-year history of the program, which includes 16 previous State playoff forays, a Bryant team has forged a second post-season win in the same year, advanced past the second round of the playoffs, and reached the semifinals. They did it with the right “man-tality”, as head coach Buck James called it, overcoming adversity and passing out licks as well as they absorbed them.

Keyed by three Hayden Ray field goals that appears to have tied the State record for field goals in a season with 17, including a school-record-tying 49-yarder, plus a defense that forced six turnovers and special teams play that included a blocked field goal attempt, the Hornets stunned the Har-Ber Wildcats, 23-16.

One of the final four in Class 7A, the Hornets are now a win away from playing for a State championship at War Memorial Stadium in Little Rock.

They face a stern test the Friday after Thanksgiving with a rematch against the unbeaten and top-ranked North Little Rock Charging Wildcats, who handed Bryant a 38-7 loss when they met in a 7A-Central Conference contest. 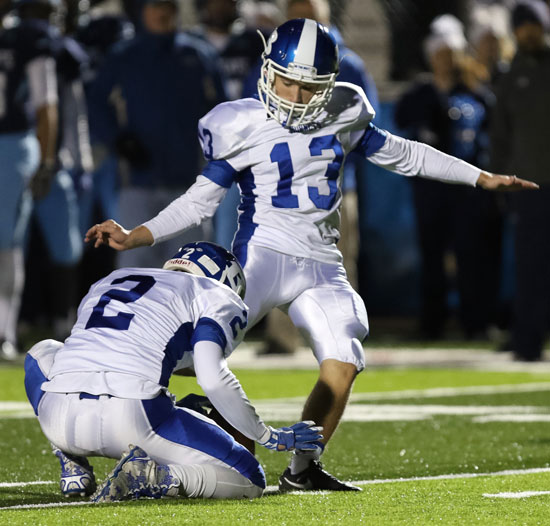 Hayden Ray boots the ball out of a hold by Landon Smith. (Photo by Rick Nation)

Improving to 9-3 on the season, the victory was the 27th over the last three years for the class of 2016, the most of any class in the history of the program.

Since that distressing 2-2 start, Bryant has won 7 of its last 8 games under first-year head coach Buck James.

Har-Ber came in as a co-champion of the tradition-rich 7A-West Conference, tying Fayetteville and Bentonville, two teams that will be playing in the other semifinal. The Wildcats were the defending Class 7A runners-up.

James preached almost non-stop to his team during the week not to be satisfied, to not shrink from the challenge presented by a team that, by every indication, was as good as or better than the Hornets. 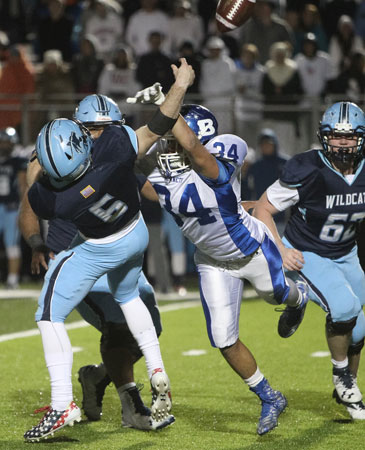 Madre Dixon drills Har-Ber quarterback Payton Copher as he was about to pass. Bryant’s Kajuan Robinson picked it off. (Photo by Kevin Nagle)

They answered the call by piling up a 20-2 halftime lead then holding off the Wildcats as they mounted a fourth-quarter comeback.

The Hornets’ defense was spectacular much of the night and repeatedly gave the offense great field position, of which they took advantage. Time and again, they turned back Har-Ber scoring bids.

The Hornets overcame plenty of adversity including the fact that they were cited for a whopping 18 penalties that cost them 164 yards in mark-offs to go with three turnovers of their own.

In fact, turnovers led to four of five Bryant scores and one of Har-Ber’s. Ray’s field goal with the wind at his back had plenty of room from 49 yards away. It matched the 49-yard field goal that Nick Harbert kicked at Sheridan in 2000.

It was the first score of the game and was set up by a short Har-Ber punt into the wind after the Wildcats went three-and-out on the opening series.

In response, the Wildcats drove from their own 20 to the Bryant 9. Most of that yardage came on a 46-yard gallop by Peyton Copher, who played quarterback, running back and wide receiver at various times in the contest. A face-mask penalty was tacked onto the run to make it first-and-goal at the 9. 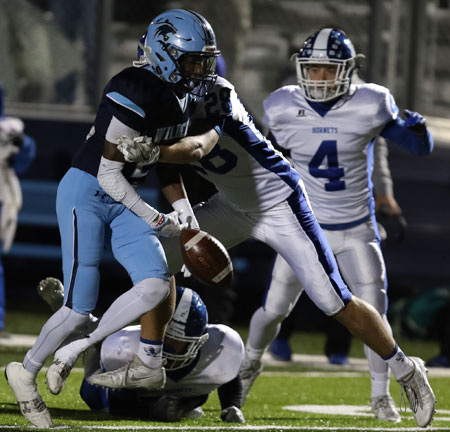 The Hornet defense stuffed them there and they had to settle for a field-goal attempt from 29 yards out. But Bryant cornerback Andrew Hayes fired off and got into the backfield in time to block the kick.

Bryant gained possession at its own 1, rooted it out behind senior quarterback Beaux Bonvillain and, with the wind, Ray blasted a 58-yard punt that in turn made Brock Pounders retreat to field. He bobbled the ball as he made an over-the-shoulder catch and, just as he gained control, Bryant’s Collin Welch drilled him at the 33.

When they were unable to pick up a first down on three plays — a stop for a loss by Nathan Mayes helped — the Wildcats lined up to punt only to run a fake. But Bryant was ready and Grant Allen was stopped short of a first down. The Hornets took over 41 yards away from another score.

Penalties, however, ruined the possession. At one point, the Hornets faced a second-and-44. With time running out on the quarter and the wind, James called two timeouts to make sure Ray would be punting with the breeze at his back. James had Ray come on to punt on third down as well after a timeout with :05 left. 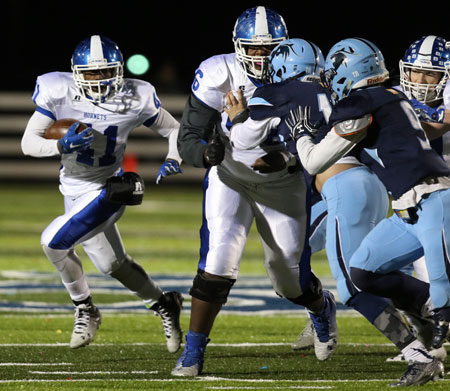 The result was a 47-yard boot that, again, Pounders had to retreat to field. That also messed up the timing of a reverse that the Wildcats ran off the kick. Tevin Eckwood wound up with the ball but he was drilled and the ball came loose. Hayes recovered at the Har-Ber 17.

Though a penalty and a loss had the Hornets facing a third-and-21 at the 28, Ren Hefley lofted a pass down the right sideline that Reece Coates went high between two defenders to haul down in eye-popping fashion at the 3.

On the next play, LaTavion Scott scored and Ray’s extra point made it 10-0.

The next Hornets score was set up by Cameron Vail’s interception at the 45 that he returned to the 13. Though Bryant was held out of the end zone, Ray drilled a 25-yard field goal into the teeth of the wind to increase the lead to 13-0.

Har-Ber was forced to punt again on its next possession. With the wind, Allen was able to nail the Hornets at their own 2. Two plays later, a swing pass from Hefley to DeAmonte Terry was tracked by the Wildcats who brought him down in the end zone for a safety that made it 13-2.

The Hornets had to kickoff to the Wildcats against the win from their own 20. Still, a good kick by Ray put the Cats back at their own 37. This time, a penalty reared up to burn Har-Ber. Allen broke a 63-yard touchdown run only to have a holding penalty negate it.

On the next snap, Copher was in at quarterback. He dropped back to pass and was blasted by defensive end Madre Dixon as he was throwing. The ball flew up in the air and into the awaiting hands of nose-guard Kajuan Robinson who rumbled to the 6.

Again the Hornets found themselves in danger of not getting into the end zone when a personal foul penalty pushed them back to the 17. But, again, Hefley put up a pass that Coates went and got, stepping in front of the Har-Ber cornerback and hauling it in for a touchdown. Ray’s extra point made it 20-2.

The teams traded punts to finish out the half.

Bryant got the ball to start the third quarter but, a first-down run brought a loss as the Wildcats shot the gaps. The ball got loose and Har-Ber recovered at the Bryant 13.

They were unable to punch it in again, however, as the Hornets’ defense kept making plays. On third down, a swing pass from Aaron Henington, the third Har-Ber quarterback, to Dalton Douangdara was stopped for a loss by Marvin Moody, Vail and Jakob Neel.

Trailing by 18, the Wildcats went for it on fourth-and-12 at the 15 only to have Henington flushed from the pocket and dropped for a loss as Hayden Knowles, Neel, Robinson and Dixon all got a piece of him.

The Hornets took over on downs and drove the ball into Har-Ber territory mostly on the strength of another pass from Hefley to Coates, who made an incredible one-handed grab.

But the drive stalled and the Hornets punted the Wildcats back to their own 26.

For the first time in the game, Har-Ber was able to put together an extended drive behind the running of Copher. They marched to the Bryant 6 where they went for it on a fourth-and-1 only to have the Hornets chase down Douangdara for no gain.

A play later, however, Har-Ber got a second chance at it, covering a Bryant fumble at the 5. Copher would score the Wildcats’ first touchdown on the first play of the fourth quarter, on a one-yard run.

Trailing 20-8, the Cats went for a two-point conversion but Henington’s pass fell incomplete.

Three penalties during the Hornets’ next possession forced Ray to punt from deep in his own end. With the wind, he drilled a 49-yard kick.

And, moments later, Copher fumbled and Hayes recovered at the Bryant 37.

Bryant cashed in the turnover, driving to the Har-Ber 26. The march was marked by a third-and-13 pass from Hefley to Luke Curtis. A 10-yard toss to Vail reached the 34, setting up Ray’s 44-yard boot that increased the margin to 23-8 with 5:13 left to play.

Copher led the Wildcats on a march into Bryant territory. He was sacked by Knowles and Mayes but, a play later, a pass interference penalty gave the Wildcats a first down at the Bryant 40.

From there, Copher went deep to Grant Ferguson who made the catch around the Bryant 10. But Caylin Allen stripped the ball away and Welch recovered as Har-Ber was turned back again.

Three penalties hampered the Hornets’ bid to run out the clock. They wound up having to turn to Ray once more for a punt. The Wildcats got the ball back at the Bryant 47.

Though it took Har-Ber nine plays to get there and a fourth-down conversion to finish it off, the Wildcats scored. Copher just barely crossed the goal line from 3 yards out.

He did it again for a two-point conversion that had the Wildcats within 7 at the 1:48 mark of the fourth quarter.

And Har-Ber executed an onside kick to get another chance. On the first play from the Bryant 49, however, Copher’s pass was picked by Caylin Allen to dash the Wildcats’ comeback hopes. 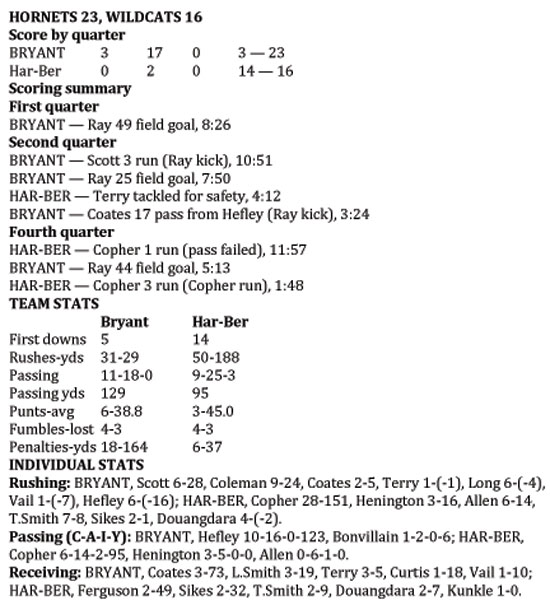