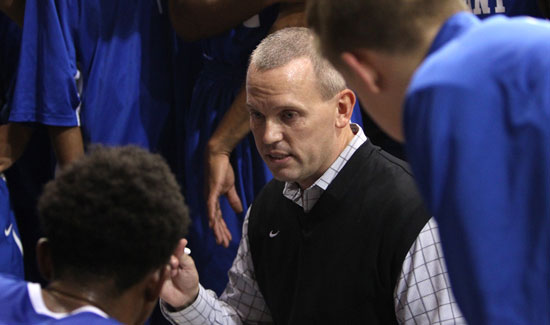 Hornets hang on to end drought against Benton

BENTON — With a 10-point lead and the momentum early in the fourth quarter, it looked like the Bryant Hornets were on their way to a well-earned season-opening victory on Thursday night. But they were playing the rival Benton Panthers and, well, rarely is anything easy when the two teams hit the basketball court.

Sure enough, the Panthers made a run at them, pulling within 2 with :19 left in the game. But two clutch free throws by senior Kevin Hunt with :08.5 showing extended the margin back to 4. 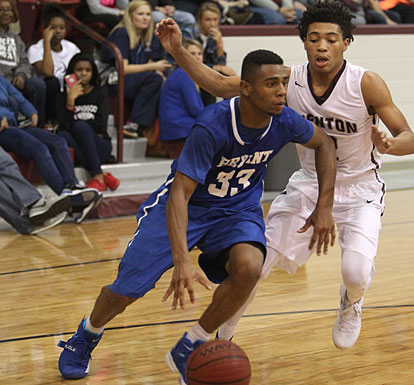 Chase Anderson got to the line for Benton with a one-and-one with just :04.2 left. He connected on the first to cut the lead to 58-55 but then, trying to get the ball back for a try at a game-tying 3, slammed the second shot off the backboard. Since it got no rim, the ball was awarded to the Hornets.

Before Bryant could get the ball inbounds, Benton fouled. So the clock was the same when Hornets point guard Calvin Allen went to the line with a one-and-one chance. His first shot refused to fall, leaving the door open for a game-tying 3. Anderson rushed the ball up the court and fired from 30 feet to no avail and the Hornets had held on for the 3-point victory at Panthers Arena.

It’s the first win over Benton by a Hornets high school team since a 56-48 victory on Dec. 16, 2011. It snapped a six game losing streak to the rival Panthers since then.

“It’s a happy locker room,” acknowledged Bryant coach Mike Abrahamson. “These kids have never beaten Benton, at least at the high school level. So they’re happy to get over that hump.” 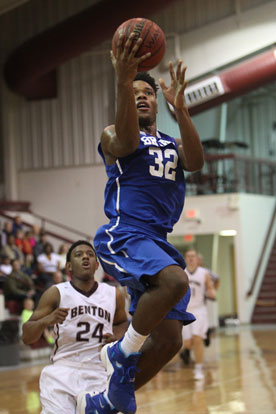 Lowell Washington (32) finishes off a drive to the rack in front of Benton’s Fred Harris. (Photo by Rick Nation)

“The kids followed the game plan really well,” Abrahamson said. “We didn’t block out and rebound well. Gosh, I thought we were going to give it to them in that regard. I feel like I say this every year. Our first shot defense is really good. We’ve got to get better on the glass. At the same time, Lowell and Braylon were in foul trouble so much in the first half.”

The Hornets were out-rebounded 30-21 but forced 16 turnovers while committing just 12, five of those in the final stages of the game.

“Our kids held their own,” Abrahamson said. “They really battled and I think the biggest thing is the way that you succeed in these situations is to stick to what you do every day in practice, stick to your plan. They did a much better job of that, of just sticking to what we do offensively, defensively.

“We wanted to play offense just a little bit longer,” he continued, “just five more seconds was what I was asking them to do. And they did it. They moved the ball well. We didn’t turn the ball over too much. We had a few bad ones there at the end that were kind of costly.

“But there’s a lot we can learn from this game,” the coach stated. “There’s a lot we’ve got to get better from. It’s not like we played perfect by any stretch. But we did enough for these kids to be really happy tonight. I’m just happy for them.”

It was a hotly contested battle, befitting of the rivalry. Benton jumped out to a 7-2 lead but the Hornets answered with a 7-0 spurt ignited by a stickback by Steen as he was being fouled. Moments later, Martin drilled the first of his four 3’s in the game, tying it at 7. Martin’s driving layup with 2:27 left in the quarter put the Hornets ahead.

Harris hit the offensive glass for a basket to tie it but Allen worked a nice give-and-go with Steen for a layup. But before the quarter was over, Anderson drove for a basket and Riddick hit a 3 to beat the buzzer to make it 14-11.

It was for Riddick, the only 3 of the night. Last year, he hit five against the Hornets and just last week he had six in the Panthers’ season-opening win over White Hall. 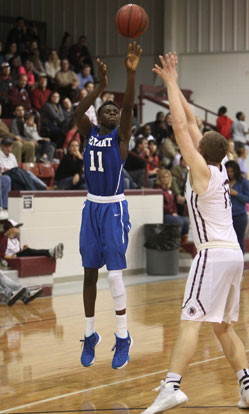 Hunt drilled a triple to start the scoring in the second quarter. He hit another on the heels of a basket by Anderson and it became a seesaw battle. With the game tied at 26 late in the half, Allen made a steal but Hunt couldn’t get a shot to go. Martin swiped the ball and got it to Hunt streaking toward the other end. He went up at the basket and was hit by Anderson from behind. Anderson grabbed him and the Bryant bench called for an intentional foul (two shots and possession of the ball) but didn’t get the call. Hunt hit a free throw to put Bryant back on top.

When Scoggins scored off a nice feed from Ladarius Phillips to beat the buzzer, Benton held a 28-27 edge.

To start the second half, Martin drained a triple and Peters drove for a basket to make it 30-30. Allen fed Steen for an open 12-footer that snapped the tie. A flurry of turnovers followed before Allen again dished to Steen for a bucket and a 34-30 lead and the Hornets never trailed again.

Benton was changing defenses and throughout the night had a defender face-guarding Hunt, Martin or both. To counter that at times, Abrahamson had whichever one was being defended that way, just pull out to the time line and the rest of the Hornets would play 4 on 4 or 3 on 3, often to great effect.

“It was a sagging man-to-man and they would face-guard,” the Bryant coach explained. “They started off just doing Rome. Then they came back and did Rom and Kev. I think for a little while, they were only doing Kev. They just like to switch it up. “We were prepared for that,” he noted. “We knew they might do that. We had some stuff ready to go against that. One of those options was 3 on 3 and just space them out and say, ‘Our 3 can beat your 3,’ pretty much, with a little structure.

“That was with certain personnel,” he explained. “With a different personnel, we were going to do something else. It just happened that we had a certain group in most of the time while they were doing that.”

That was the circumstance when Allen and Steen had those back-to-back baskets. Washington got in the mix with a pair of free throws and, after an Allen theft, a basket inside that made it a 5-point lead.

Anderson drive for a bucket then Washington assisted on a basket by Martin. With 2:43 left in the third quarter, Martin poured in another triple and Washington scored as he was fouled at the 1:16 mark. Suddenly, the Hornets were up by 10, 44-34. It was 46-36 going into the final period.

Scoggins got a stickback to start the fourth but Kaleb Turner came through in kind on the other end for Bryant.

Moments later, however, a technical foul started to turn the momentum back Benton’s way. The Panthers trimmed the lead to 5 and had a chance at the line to get closer with 4:50 left in the game. But neither free throw would go and Allen drove for a basket.

Back and forth it went with Steen hitting two free throws and Washington driving for a score off a steal before Peters drained a 3 to get the Panthers within 54-50 with :53 left.

Out of the timeout, Hunt made a sparkling pass to Steen for a layup and with :36 left, it looked like the Hornets hand things in hand. With :26.7 left, Anderson drew a foul and converted at the line twice. The Hornets turned the ball over against the Panthers’ press and, after they took their final timeout, Scoggins drove the baseline and scored to make it 56-54 with :19 left.

The Hornets worked the clock down to :08.5 before calling a timeout. On the inbounds play, Hunt was fouled before the ball came in, just seconds before Allen threw in to Martin who had a clear path to the hoop behind the Benton defense.

But Hunt converted both shots in the clutch to make it a two-possession game again and setting up the final scenario.

Bryant returns to action on Tuesday in its home opener. They’ll take on Rogers Heritage, the team that knocked them out of the Class 7A State Tournament last season.