Though they’d tied them twice during the 11-4-4 campaign in 2005, no Bryant Hornets soccer team had ever beaten the North Little Rock Charging Wildcats. 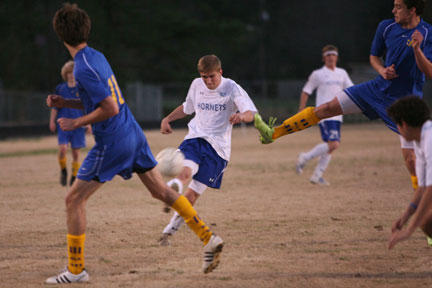 And for much of the first meeting between the two teams in the 2009 season on Tuesday, March 17, it looked like that wouldn’t be changing. The Wildcats led 1-0 at the half and through 25 minutes of the second.

“We started out flat,” allowed Hornets coach Jason Hay. “We didn’t play well in the first half. They chipped one out from about 35 yards. Our keeper was a little off his line and they just got it right in the corner. It was kind of a luck shot.”

The Hornets, who had started out the season 5-0, were staring straight into their fifth straight 7A-Central Conference loss since then. But, after North Little Rock broke up an attack knocking the ball out of bounds, the Hornets got a corner kick from Reed Evans and senior Aaron Prewitt headed it past the Wildcats’ keeper to tie the game with 15 minutes to go.

Like a great weight was lifted off their backs, the Bryant players came to life and before it was over punched in two more goals to extract a 3-1 victory, the first over a North Little Rock team and their first conference victory of the season. The Hornets take a 6-4 overall mark into spring break, no doubt a much more relaxed break after the win. They’ll host Little Rock Catholic when they resume play on Tuesday, March 31.[more] 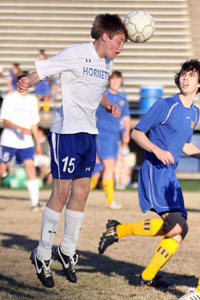 “Toward the end of the first half, we started getting after it a little bit,” Hay noted. “The key to it, I think, was that we didn’t lose our composure. With 15 minutes left, down 1-0 and you haven’t sniffed the goal all night, it’s hard to keep your composure. But once we tied it up, the kids got their head right, kind of perked up and they decided we were going to win. That’s a good sign.”

Adding to the frustration was a goal that was not allowed in the first half when it was ruled the Hornets made contact with the North Little Rock keeper. 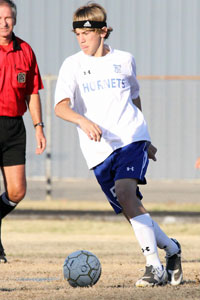 “(Tim) Ezel does a good job throwing it in,” Hay noted. “He gets good distance and places it well and we had several opportunities in the first half to get a header in, we just never could get our head on it. We just looked flat. We rep those corners for 30 minutes a day so it was good that Prewitt got it.”

Moments later, the senior chipped another one in to put the Hornets ahead. And it stayed 2-1 until right at the end, when Jonathan Lowery beat the horn with a goal to set the final score.

It was, as Hay noted, the first 7A-Central Conference win over a team other than Pine Bluff or Cabot since Little Rock Hall and Little Rock Parkview were in the league.

“It was good to finally get a win in conference,” Hay emphasized. “Our goal is to get into the playoffs and this is a good start to it. We’ve got to go back now once spring break’s over and go through the 7A-Central gauntlet again so we needed something good to happen before we took our break.”