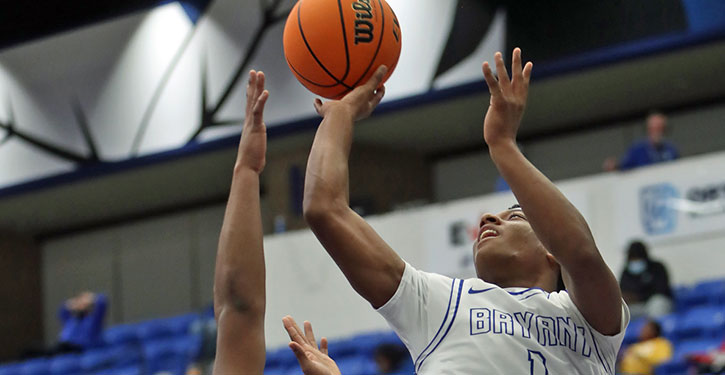 CABOT — Clark Kellogg, the former college and pro basketball star who became a college basketball commentator of some repute, called it “spurt-ability”, the knack of a team to put together big runs, usually in a hurry, off turnovers and quick-shot defensive rebounds and quick-outlets.

The Bryant Hornets had runs of 12-0 in the second quarter, 11-0 in the third quarter, and 12-4 in the fourth but they weren’t those classic spurts. Against the Cabot Panthers, who work the ball on offense, screen and cut, screen and cut, those blitz runs are just hard to put together. The Panthers made the Hornets work on defense.

But work they did, forcing Cabot into 21 turnovers and just 35 percent shooting from the field. The Panthers were just 3 of 16 from 3-point range and got outrebounded 36-30.

So, the Hornets’ sprees were gradual.

They were none the less affective, however, as they produced a 67-46 victory that spoiled Senior Night in Cabot and dashed the Panthers’ last-ditch hope of making the Class 6A State Tournament.

The Hornets had sewed up the 3 seed from the Central. The win improved them to 17-4 overall and 9-4 in conference with a final home game set for Tuesday against Little Rock Southwest.

As a 3 seed, the Hornets will open the State tourney at Fayetteville High School on Tuesday, March 9, against the 6 seed from the 6A-West, Rogers Heritage, at 7 p.m. A win there would set up a rematch against Fayetteville and a chance to spoil the home team’s State run like the Bulldogs did to the Hornets when the tourney was in Bryant a year ago.

“They’re really good at it,” he said. “They’re hard to guard. Give them credit for that. They’re a tough match. They screen well. They cut well. Their timing is really good at what they’re trying to do. So, it was quite a challenge.”

It was a seesaw game in the first quarter with the Hornets taking a 12-11 edge in the second period on a pair of free throws by Will Diggins with :02.2 left.

Garrett Hill, who along with post Van Ezell was quarantined when the Panthers came to Bryant on Jan. 22 and lost 64-24, scored to start the second quarter to give his team a 13-12 lead. But that was the last one for Cabot. Hill finished with 9 points and Ezell 11 to lead their team.

Cam Hunter had 21 points and 11 boards for the Hornets. Kade Ruffner finished with 16 points and five caroms.

A drive to the rack by Cory Nichols put the Hornets back on top and started the second-quarter run. Ruffner hit two free throws then followed up with an offensive rebound basket to make it 18-13 and force a Cabot timeout.

When play resumed, Ruffner made a steal that led to a trip to the free-throw line. He converted the second shot then made a second steal. Gavin Brunson converted a pair of free throws after taking a feed from Ruffner. Moments later, a three-point play by Hunter produced the first double-digit lead of the game for Bryant, 24-13.

Brayden Roberts ended Cabot’s drought with a 3 to make it an eight-point game at the half.

“The first half, I didn’t think we did as good as we could’ve done,” said Abrahamson. “But we still held them to 16. We trailed some cutters a couple of times, curling to the basket. We didn’t jump to the ball like we’re supposed to.

“I think when there’s that type of action, a player’s tendency is to get closer to the man and not trust, with discipline, what they’re supposed to do, which is jump to the ball and give each other space to get through screens,” the coach explained. “We did that most of the time. That’s just stuff we work on every day. We practice against similar stuff, try to do some similar stuff.”

Bryant was just 1 of 12 in the first half on 3-point shots but the Hornets were great at getting to the free-throw line and converting.

“We were shooting a lot of non-in-and-out 3’s in the first half,” Abrahamson said. “The thing that saved us a little bit was getting to the free-throw line and making 9 of 11 in the first half.”

The shooting improved in the second half with the Hornets knocking down six 3’s.

“In the second half, we were able to get to the inside-out, getting in the lane a lot more and the 3’s that we hit were in-and-out 3’s,” said the coach. “That’s just kind of how we like to play, inside-out. That doesn’t mean we have to score inside. They fouled us and, in the second half, we got some good kickouts.

“They really pack it in so it’s easier said than done to drive it on them,” he said. “They give you those shots and just try to contest them. And our guys fell for it, which is understandable, to see that much space and have confidence in yourself to think to shoot it.

“But, as we talked about before, to play well, we have to play with a good rhythm and that rhythm is created by getting the ball inside in any way, on the post, off a cut and a pass, off a drive then kicking it back out and maybe one more pass after that. We got a lot more of those in the second half.

“That’s the kind of shot that you practice every day,” Abrahamson explained. “You have somebody passing it to you from in the lane, kick it out, you’ve already got your line of sight toward the rim. When you just catch it from the top of the key on the wing, your line of sight is on the top of the key. Then you have to turn and catch and try to locate the rim. It’s just about a rhythm and a good feel for how we’re trying to play.”

The teams traded baskets for half of the third quarter. Bryant’s lead was 34-26 when Gabe George drove for a quick basket off a Cabot make at the other end. Moments later, Ruffner went to the line and converted once. When he missed the second shot, one of the Hornets tapped the rebound outside to George and Hunter got free for a short jumper that made it 39-26.

After a Cabot timeout, the Hornets resumed their run as Aidan Adams, off consecutive assists by Hunter, bombed in a pair of 3’s that extended the lead to 46-26.

A 3 by Cabot’s Gavin Muse made it a 16-point game going into the fourth quarter.

Sam Owen hit a 15-footer to start the second half and trim the margin to 14 but George splashed a triple. Ezell posted up for a bucket but then Hunter took over the game, scoring Bryant’s next 12 points while Cabot managed free throws by Owen and Ezell. The lead ballooned to 60-37.

Roberts drove the baseline to break a three-minute field-goal drought for Cabot. Bryant freshman Drake Fowler countered with a pair of free throws, a steal and a layup. Ezell hit a free throw but then Nichols popped a 3 and Bryant had its largest lead at 67-41 with 2:48 left to play.