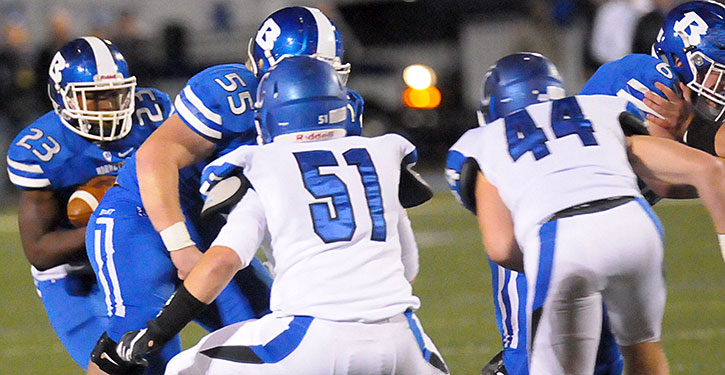 For more photos from this event by Rick Nation, go here; by Kevin Nagle, go here 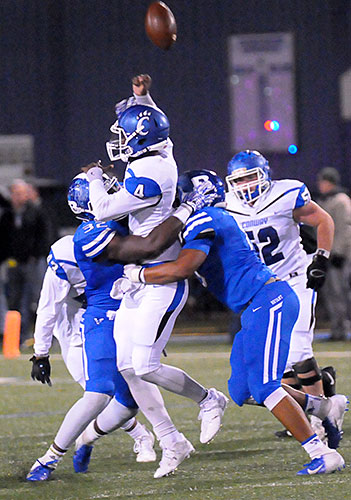 Senior Night, the Conway Wampus Cats and a little extra fire from the sidelines spurred the Bryant Hornets to their most impressive game of the season Friday night as they pinned down second place in the 7A-Central Conference and a first-round bye for the playoffs with a 40-10 romp.

The Hornets played stifling defense against a Conway offense that came in averaging over 36 points and 400 yards per game. The Wampus Cats finished with 250 yards total offense and, at halftime, had only mustered 44 yards.

The effort and the focus was as consistent, from start to finish, as in any game this season.

“I think so, and against a good team,” said Hornets head coach Buck James, adding of the second-ranked Wampus Cats, “That’s a good football team. They’ve really been a powerful offensive juggernaut. For us to do what we did, to hold them to 10 points, says a lot. 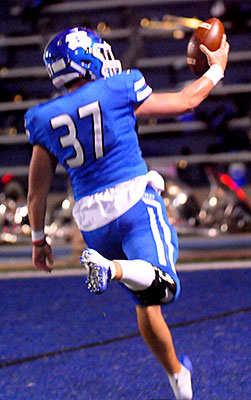 Jakob Neel finishes off his interception return for a touchdown. (Photo by Kevin Nagle)

“Our defense played extremely well, and they have all year long,” he asserted. “We have two hiccups and we lose two games. We’ve got to learn that we can’t do that. If we have another hiccup, we’re through playing football. Our guys have got to understand, it’s a do-or-die situation. We’ve got to bring our A game every time we play. And we’ve got to do the things it takes for our football team to get better each and every week through this process.”

With the bye, the Hornets will be off until Friday, Nov. 16, when they’ll probably get a rematch with the Fayetteville Bulldogs, who pinned a 36-35 loss on Bryant in the third week of the season, one of those hiccups.

James usually has mixed feelings about a bye.

“We’ll see,” he said. “It’s hard to break your rhythm but I think our team needs to decompress. This is, without a doubt, the toughest schedule a Bryant football team has ever played, start to finish. I mean, every game has been a big game.

“You look at it,” he explained. “We start with Benton in the Salt Bowl then we turn around and play Bentonville West then we play Fayetteville. How do you have a tougher stretch than that? Then you finish up with Cabot, North Little Rock and Conway. That’s a heck of a schedule. And what was in the middle wasn’t soft at all. This is a tough league. 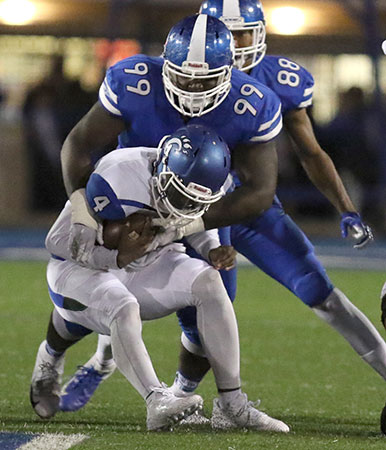 “We’re not hurt or banged up or anything, but I think if our kids can just get a second to decompress, re-evaluate themselves, get where they feel good about being at practice every day then just get on this run and, hopefully, we can finish where we started, at War Memorial Stadium,” the coach declared. “That’s our goal. We can do that, if we play well.”

Along the way, the Hornets could not only get another shot at Fayetteville, but they could avenge a loss that ended their season last year at Bentonville and, then, in the finals, could get another chance at North Little Rock if it all plays right.

The highlight of the game came as part of that third-quarter blitz. Bryant had increased the lead to 19-3 with Scott’s third touchdown and Conway was making a bid to answer, driving from its own 30 to the Bryant 23. On a second-and-6, the Wampus Cats’ 6-5 senior quarterback Jovani Johnson was back to throw and got hammered from two sides by Kyle Green and Nate Wallace as he was releasing his pass. The ball popped into the air and the Hornets’ senior linebacker Jakob Neel, who had missed 2/3 of the season recovering from a knee injury, plucked it out of the air and raced 65 yards to another TD. With Grayson Scoles’ extra point, it was 26-3. 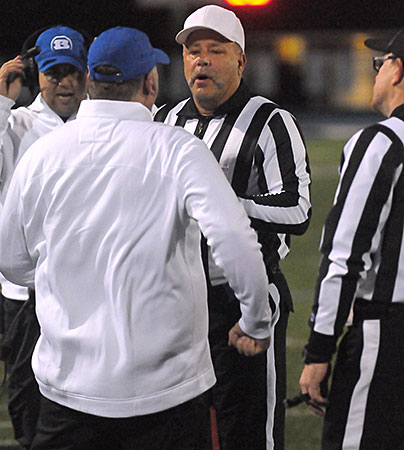 With the crowd on its feet and the momentum surging, Scoles popped up the kickoff and deep back Shane Smith had to bust it to come up for the ball. It bounced off his chest towards a pair of oncoming Hornets, Treyvon Herron and Koby Melton. Amidst a pile of players, there was an initial call that Bryant had recovered and, sure enough, Melton rose up out of the pile with the football.

But the officials ruled that Conway had recovered.

James went ballistic, the fans came to their feet, the Hornets fired up and the coach continued long enough to draw an unsportsmanlike conduct. But by then the packed house and the sideline was at a fever pitch.

Conway still managed to push to a first down but, on a fourth-and-6 at the Bryant 43, a bad snap cost them. Johnson had to fall on the ball and Bryant took over.

Sophomore quarterback Austin Ledbetter, on in relief of senior Ren Hefley, fired a 19-yard pass to Brandon Jett and, after Scott powered for 5 yards, Adams broke a 29-yard touchdown run to make it 33-3. 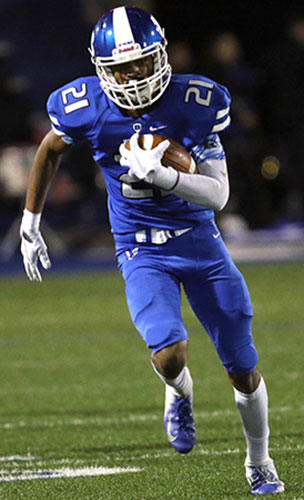 “Probably one of the bum-headed coaches moves that  bever was, Ahmad didn’t play in the North Little Rock game,” James mentioned. “Jakob Neel came back to play Mike linebacker and we moved (Ahmad) back to running back. We just didn’t feel comfortable with him in there because he hadn’t really practiced there a whole lot. We’d played him in games some but just hadn’t practiced him, so the playbook was limited.

“But I think he showed what a 1-2 punch we have here,” the coach asserted. “All he needs is a crease. They’re not going to catch him. Latavion will get caught but they’re not going to catch Ahmad. Latavion just fights them off of him and just runs all around them. They complement each other. If we can get those two guys going, with our offensive line and our passing game, if we catch the football, I really think this can be a really good offensive football team.

“I felt our offensive line really took over in the second half and we ran the ball well,” he added. “Really, it ain’t going to matter who the quarterback is if they’ll run block like they did, and we have the runners run like they did.”

The Hornets were up 6-3 and had possession at their own 26. On a second-and-3, Hefley, who was 6-of-9 throwing for 33 yards to that point, had time but couldn’t find an open receiver. He was sacked for a loss of 6. Among his misfires too were a pair of deep throws — probably touchdowns — that missed open targets. He had, however, connected on his first three passes of the game, setting up Scott’s 24-yard touchdown run. 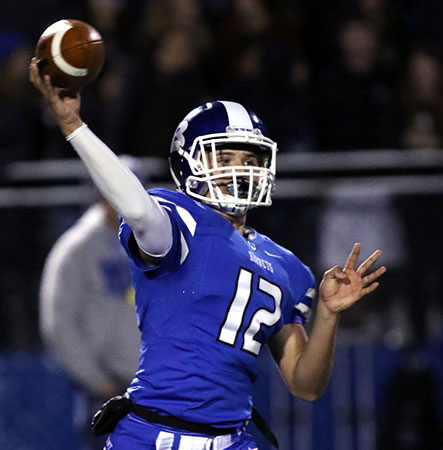 After the sack, the Bryant coaches inserted Ledbetter.

“I just thought it was time to, basically, give him a chance to see it from another perspective,” James said of the decision. “I think it’s good for kids. We’ve done it to every guy. You don’t usually do it to quarterbacks, but we’ve tried everything else.

“You know, one thing about Ren, he is a heck of a competitor,” he added. “He’s a great young man and he’ll learn and grow from it. There’s no doubt in my mind. We have quarterback who can play just like we have tailbacks who can play, just like we have offensive linemen who can play, and we pull those guys. We’re not down on him. It’s just that he held the ball on the second-down play and took the sack. We need him to throw that ball away or run for it. 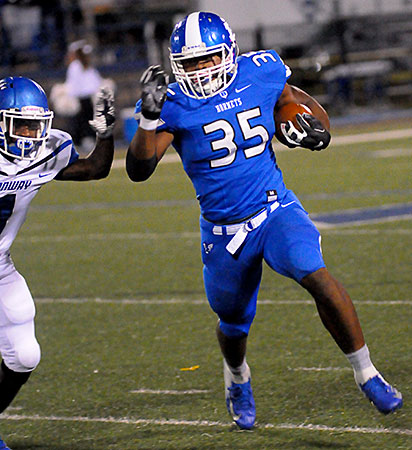 “That’s what happened to us at North Little Rock,” James continued. “He just got a little lackadaisical. This, hopefully, will put a spur in him and he’ll get better for it. I think that’s what every kid needs. He’ll grow from it. That’s the winner he is.”

Ledbetter’s first pass went to senior Josh Robinson, who turned it upfield and raced down the sideline for what turned out to be a 50-yard gain. That led eventually to Scott’s second touchdown run from 18 yards out with 1:12 left in the half.

Though a two-point conversion attempt failed, the Hornets had extended their lead and were set to get the ball to start the second half.

Scott started the third quarter with a 41-yard bolt. He would cap off a 75-yard drive in seven plays, all on the ground, from a yard out after he’d nearly scored from the 15 on the previous snap. 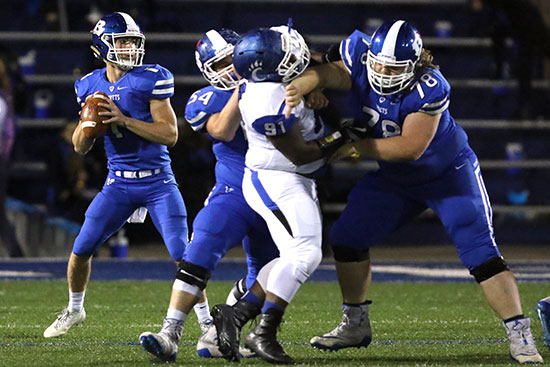 The Hornets continually pounded on Johnson who wound up rushing for 44 yards on 22 carries including five lost-yardage plays. He was 10 for 24 passing for 90 yards before giving way to his back-up Nick McCuien.

Before he left the game, Johnson engineered a touchdown drive to cut into the 30-point Bryant lead. He was 5 of 8 on the drive including a 25-yard touchdown toss to Nick Richmond that he somehow got rid of despite being blasted by the Hornets. 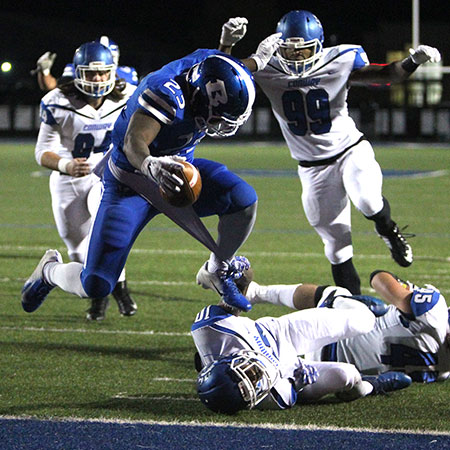 Latavion Scott breaks a tackle to get into the end zone on one of his three touchdowns Friday night. (Photo by Rick Nation)

“I think we’ve got the most under-rated defensive line in the state,” James stated. “Our defensive line has held in there with everybody. It’s not been our defensive line’s fault in any form or fashion. We’re young in the secondary and sometimes that costs us some mistakes and they get a lot of opportunities because a lot of people quit running at them and throw it a lot. Our front seven really does a good job and they just proved it again tonight.”

The Hornets answered Conway’s score with a four-play, 78-yard blitz that was finished off by Adams’ 49-yard burst.

Conway tried to respond with its running game. The Cats got to midfield but, on a second-and-10, linebacker Cameron Scarlett knifed through to pop Luke Bailey for a loss of 3. 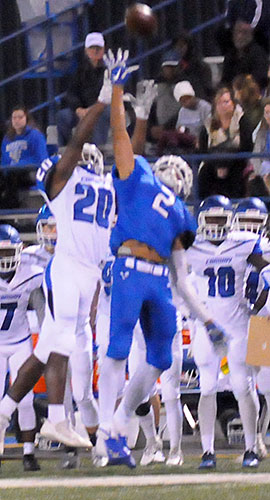 After Conway turned it over on downs, sophomore Austin Schroder ran out the clock with 47 yards rushing on three plays as James worked in all of the seniors and a lot of other reserves. 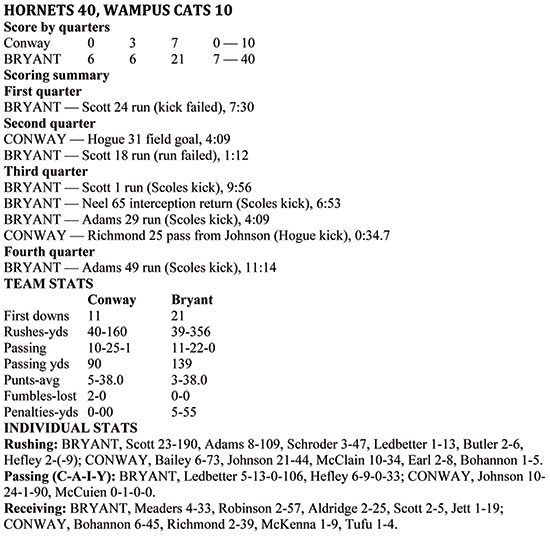 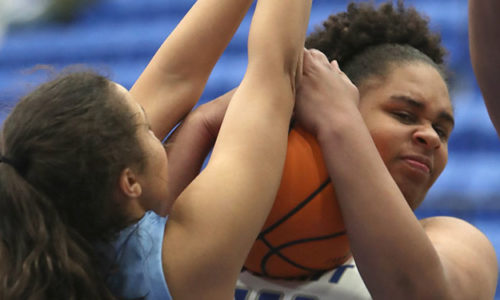 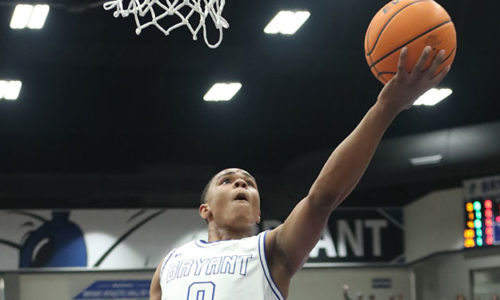