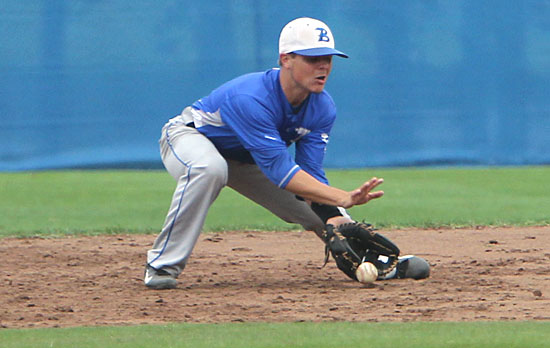 Hornets headed back to Baum after Jackson’s shutout

NORTH LITTLE ROCK — For the fourth time in the last five years, the Bryant Hornets will play in the Class 7A State baseball championship game with a chance to capture their third title in that span. Right-hander Zach Jackson tossed a four-hit shutout on Monday in a 2-0 win over the once-and-future conference rival Conway Wampus Cats at Vince DeSalvo Stadium. 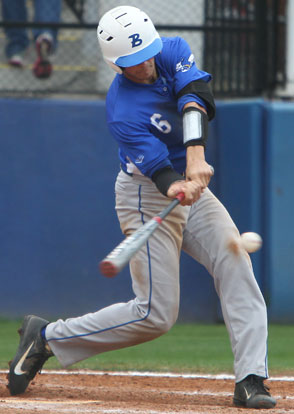 The Hornets take a 32-2 record into the 2014 final against the defending champion Fayetteville Bulldogs who ousted Cabot, 5-0, on Monday. The title contest will be at the University of Arkansas’ Baum Stadium in Fayetteville this Friday at 4:30 p.m. r

Bryant won the championship in 2010 and 2012 and was runner-up to Conway in the 2011 finals. Last year, they were upset by Rogers in the semifinals. Fayetteville then beat Rogers for the crown.

Jackson’s whitewash came on the heels of teammate Blaine Knight’s blanking of Fort Smith Southside on Saturday. Jackson fanned seven and walked three and, after early jitters, set down nine in row and 15 of 16 at one stretch.

Both Bryant runs scored in the fifth, snapping a scoreless duel with Conway’s Matt Strickland. Dalton Holt led off the inning with a double off the third-base bag.

The Hornets had had base-runners on board in every inning up to that point so Wampus Cats head coach Noel Boucher turned to ace reliever Connor Williams at that point. Williams fell behind Korey Thompson 2-0 then grooved one that Thompson bunted, trying to sacrifice Holt to third. Williams was able to get to the ball in time to have a play on Holt at third but his throw was errant. Holt scrambled home and Thompson sprinted into second.

Two pitches later, Trevor Ezell cracked a drive into the left-field corner that fell at the base of the fence for and RBI double.

Williams settled in at that point and forced the Hornets to strand Ezell at second but the damage had been done.

Conway missed its best opportunities. In the bottom of the first, Jackson struggled to find the strike zone, issuing one-out passes to Jacob Adams and Cade Jones, bringing Bryant head coach Kirk Bock to the mound.

“Zach did a great job,” Bock stated after the game. “I go out in the first inning and just go, ‘Are you all right?’ He assured me that he was fine. He just couldn’t get the feel for it. But once he got the feel for it, he’d be fine. Our pitching coaches, Coach (Brent) Noble and (Mark) Cain assured me that once he finds it, he’s going to settle down and be fine. And he did. And once he got some runs, he went to work.”

“I realized what I had to do to get the job done,” Jackson explained. “I finally bought in. I got it. I got all the nervousness out of me and I figured it out.”

He got a big out when, after the visit, he struck out Williams, the Conway clean-up hitter. Though he walked Evan Wilson to load the bases, he got Carson Cook to tap back to the mound to force the Cats to leave three on.

Despite giving up one-out singles to Kyle Alexander and Adam Winter in the second, getting out of that first was a big confidence boost for the Bryant sophomore hurler.

“The second inning, I knew it was about to be on,” Jackson related. “They had some trouble coming.

“My curveball was my best pitch,” he said. “I threw that more than anything. And coming in with the change. I only threw about five fastballs.”

“You’re not going to get a lot of runs on Conway, just like the majority of the time, people aren’t going to score a lot of runs on us,” Bock said. “They throw strikes. They make you put the ball in play. They have a tremendous defense. At this level, it’s hard to just go out and pound out eight, nine, 10 hits without somebody making a mistake to help you. 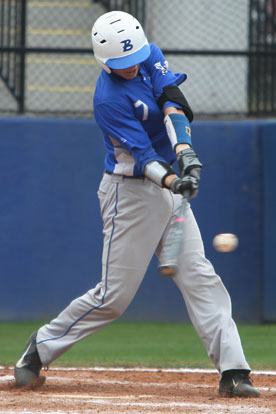 “Both sides, we played a good clean game,” he stated. “They had that one mistake off a mistake we made bunting it back to the pitcher.”

Bryant had one too but it came late and Jackson was able to overcome it. He got out of the second inning jam even though the Wampus Cats had the top of the order up with two on. Colby Reck flew to Chase Tucker in center and Adams grounded out to Thompson at second.

That started the run of 15 out of 16, interrupted only by an infield hit on a squibber to short by Reck. He stole second but Jackson struck out Adams and got Jones to sky to center.

Thompson made a nice play for the first out of the sixth. In the seventh, Quenton Wyrick lined out to Thompson but then Alexander pulled a single into left. The Hornets nearly ended it twice after that. First, Adam Winter flew to Drew Tipton in shallow right. Conway’s courtesy runner Collin Condit had gone more than halfway to second and had to sprint back to first to just beat Tipton’s throw to Holt, avoiding the game-ending doubleplay.

Reck then fisted a low pop to the right side that both Holt and Thompson drew a bead on. It looked like the game was over but the two crashed into each other and the ball dropped. Condit made it to second and Reck was safe at first, representing the tying run.

But Jackson was unfazed. Yes, “Panda” was cool and struck out Adams, a University of Arkansas signee, to end the game.

“I wasn’t worried about it,” said Jackson, who is nicknamed Panda. “We had a 2-0 lead, a runner on second — big deal. We’ve got two outs — ground ball, we’ve got a force at second or first. Or just K him up, even better.

“We knew going into it that it was going to be a tight ballgame,” said Bock. “Conway happened to make a mistake early and it cost them a run. Then we made a mistake at the last but Zach had enough gas in his tank to finish it out.”

The Hornets had runners in scoring position in the first and third innings. In the opening frame, Tipton was hit by a pitch and stole second but was stranded. In the third, Thompson yanked a single into left and Ezell sacrificed. Tipton hit a grounder to the right side to get the runner to third then Tucker walked.

Tucker left early from first and got in a rundown. Thompson, looking for a chance to score, had to scramble back to the bag around a tag when Cook, the Conway first baseman, threw behind him to Winter at third. Tucker took second on the play then Trey Breeding made a bid for an RBI single only to have Winter rob him with a diving stop to his left.

In the sixth, Jason Hastings walked and Evan Lee sacrificed him to second but Williams wriggled out of the jam then worked around a walk to Ezell in the top of the seventh.

Looking ahead, Jackson acknowledged that he, like most of the other Bryant players, will be experiencing something new this Friday.

“I’ve never been in this situation,” he declared. “I’m excited. I’m ready to be at Baum and dogpile.”

Strickland faced one batter in the fifth.