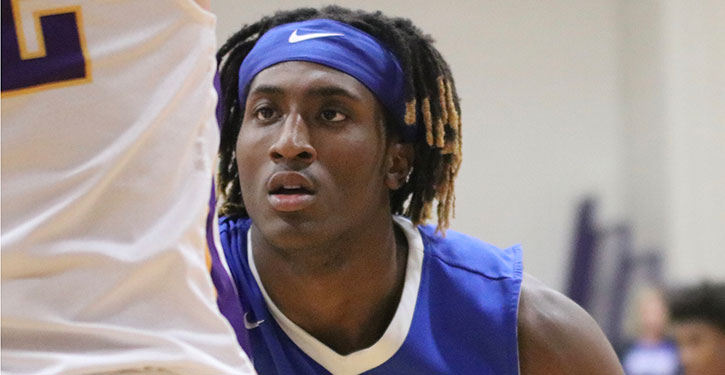 LITTLE ROCK — Though it looked like it might be a breeze initially, the Bryant Hornets had to withstand a rally by the Little Rock Catholic Rockets on Tuesday night in their 6A-Central Conference showdown.

This is, after all, the 6A-Central.

“When we score, our defense is a little better and when they score, their defense gets a little bit better,” Abrahamson allowed. “We quit attacking. We were getting a little bit lazy on defense and we’re not attacking on offense. Those were the two things that got us where we were at halftime.

That third quarter, the third quarter in fact, the Hornets were icy from the field and what had been as much as a 23-point lead was whittle to 6 in the third then, eventually 4 early in the fourth quarter.

The coach called a timeout during the Rockets’ rally.

But head coach Mike Abrahamson cooled the Rockets’ momentum by spreading the floor, forcing Catholic to extend its packed-in zone defense and the Hornets proceeded to go on a 13-4 run to nail down a 60-47 victory, their first of the conference season.

“We didn’t do as good a job on defense,” he mentioned. “We got a little bit complacent. They hit a couple of 3’s that got them going. Then we played behind in the post a couple of times and they got deep post positioning, scored and got fouled. I don’t have an explanation for that. I don’t know why that happened other than just letting up.

“I told them, ‘No offense is going to work if you just stand around,’” he related. “So, we tried to start getting some movement.”

The Hornets applied a press and though it didn’t force a lot of turnovers, it helped.

“We were just trying to jump-start them a little bit,” said the coach. “We want to move quickly and aggressively, whatever we’re doing.”

Regarding the slowdown, Abrahamson said, “They cut it to 4 and I decided just to take a breather there and hold it for a second and make them come out and extend their defense, open up some space for us. I noticed a few of our parents yelling at me, getting mad at me. But then the lead extended back up into the teens. I guess the parents were wrong on that one.”

The closing surge started with a post-up basket by Camren Hunter, who was effective at that all night on his way to 13 points.

Hunter made a steal and missed his shot but a tie on the rebound went to the Hornets and, with 4:19 to go, Catrell Wallace went to the line to add a pair of free throws.

Another Catholic turnover led to a bucket by Treylon Payne on a driving jumper.

And, with 2:58 left to play, the Rockets needed a timeout to try to slow down the Hornets’ push.

When play resumed, Catholic missed three shots at ending its drought. When Rodney Lambert fed Wallace for a basket with 2:24 left, the Hornets were back up by 12, 55-43.

Two free throws by Charles Daniel interrupted but Payne buried his third trey of the game to make it a 13-point difference.

Daniel converted a pair of free throws but then Kayleb West, on after Payne had tweaked an ankle and Hunter had developed a leg cramp, took a feed from Wallace inside on a 2-on-1 situation and scored to set the final score.

Along with Hunter, Payne had 13, Lambert had 9 and so did Padrick Martin, a junior transfer from Little Rock Central, who was playing his first varsity minutes of the season.

“Padrick is an energizer,” Abrahamson said. “He plays really hard. Now, he’s not used to it so it’s hard for him to keep it going. He had a great first couple of minutes, a dunk with a couple of steals, a couple of put-ins. Because it’s new to him, it’s hard to maintain that. He kind of disappeared a little bit but he’ll get better. He’ll help us a lot.”

Martin had 5 of his points in the first quarter, part of Bryant’s 22-point stanza.

Catholic had a 5-2 lead early on a drive and a 3 by Josh Dawson. But Payne’s first 3 tied it and got the Hornets rolling. Hunter gave Bryant the lead for good when he grabbed an offensive rebound and scored. Payne followed with another triple and it was 10-5.

Free throws by Lambert and Martin extended the lead further then, on an inbounds play, Aiden Adams poured in a 3 from the corner. Lambert drove for a layup and the Rockets had to have a timeout down 18-5.

Martin then made a steal and got his dunk to make it a 15-point game. Catholic’s four-minute-plus dry spell ended when Sam Hannah hit a 3 with :14 left in the quarter. Martin, however, beat the buzzer off a nice feed from Lambert, making it 22-8.

A 3 from Khasen Robinson and a stickback from Martin had the Hornets up 27-10 but the Rockets whittled it down to 14 before Lambert made a steal and layup to start an 9-0 rally for the Hornets. Hunter went inside out for an assist on a Lambert 3 then a steal by Hunter led to a layup. Payne’s drive to the rack gave the Hornets their largest lead of the game at 38-15.

Brian Flanagan who matched Daniel for team-high honors with 12 points, scored the last 6 points of the half to trim the margin to 17. He then opened the third quarter with a 15-footer, starting the Rockets’ comeback.

The cut the margin to 7 and Abrahamson took a timeout with 2:40 left in the period. To that point in the quarter, the Hornets had hit just 1 of 8 shots.

But Wallace converted a pair of free throws and, off a Rockets’ miss, Hunter scored down low and was fouled, completing the three-point play to make it 45-33.

However, a 3-pointer by Jordan Edington was followed by his three-point play, had the Rockets within 45-39. Lambert connected twice at the line after a full-court slash through the Catholic defense to beat the buzzer ending the quarter.

But that’s as close as they got.

Bryant played without junior all-State guard Khalen Robinson for the second game in a row.

The Hornets, now 10-4 overall this season, are 1-1 in league play going into this Friday’s home battle with Little Rock Central.