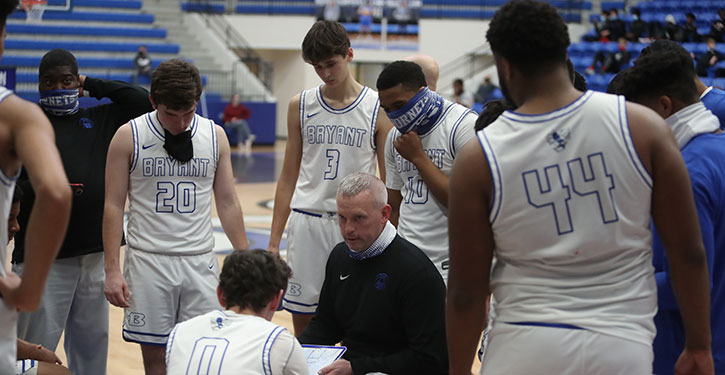 LITTLE ROCK — Eighteen seconds into the fourth quarter, Little Rock Catholic’s C.J. Onyeleweh scored and was fouled. Though he missed the free throw, it pulled the Rockets within 34-27 of the undefeated Bryant Hornets.

But, as it turned out, Onyeleweh’s basket was the last points Catholic put on the board. The Hornets’ defense held them scoreless the rest of the game. Hornets head coach Mike Abrahamson put the ball in senior Camren Hunter’s hands on offense and the team closed with a 13-0 run to turn a close game into a 47-27 rout.

Hunter wound up scoring almost half of his team’s points, 23, to go with six rebounds, four steals and three assists.

As a team, the Hornets outrebounded the Rockets 33-28 and forced 22 turnovers while committing just 13. Catholic was 1 of 9 from the field in the fourth quarter after going 1 for 6 in the second quarter when the Hornets held them to just 3 points.

Noah Wright paced the Rockets with 10 points and eight rebounds.

“If you want to be a great team, you have to be able to win games in different ways,” Abrahamson stated. “You can’t win the game the same way every time. You’re not going to be able to score a lot of points all the time. Sometimes the opponent is going to score on you, and you have to — it’s just different.

“Catholic did a great job defending us tonight,” he said. “They did a great job making it tough on us. This is a tough place to play. I give a lot of credit to their team for making it hard on us to play offense. It’s a season low for us, 47.

“But, credit to our guys,” the coach insisted. “As the game went on, we guarded them better and better and better. It took a few reminders from me. But they did it and they were awesome at it that last quarter. That defensive effort, to give up just 27 is something to be proud of for them.”

As it turned out, the Rockets scored more than half of their points in the first quarter, which ended with them trailing the Hornets 16-14. But they never led.

Hunter started the scoring with a 15-foot jumper. Moments later, Austin Schroeder, in the starting lineup for Kade Ruffner who was sidelined with an ankle injury, took a charge. Adams knocked down a 3 and it was 5-0.

With Beau Kronenberger scoring all 8 of his points in the game during a 1:23 stretch in the quarter, the Rockets stayed close. Bryant’s lead was 9-8 after Kronenberger’s second 3.

There were only 13 free throws attempted in the game between the two teams. Cory Nichols hit the first one halfway through the first quarter to complete a three-point play. A stickback by Brunson had the Hornets up 14-10.

Wright scored the next 6 points for Catholic, but they could get no closer than the 2-point difference at the first break.

“You’ve got to respect the opponent and you’ve got to give them some credit for your performance when you’re not playing well,” said Abrahamson. “They do a great job of protecting the rim but also getting back out to the shooters when you kick it out.”

The Hornets stretched the lead in the second quarter but only converted 2 of 12 from 3-point range in the first half, only 5 of 21 in the game.

“We hit a few 3’s but we usually make more than that,” the coach agreed. “Missing Ruffner was a part of that.

“They weren’t all great contests on our 3’s but they were enough to where I think our shooters knew they were there,” he added.

Uncharacteristically, the Rockets were just 1 of 9 from the free-throw line and their lone make by Thomas Fitz started the second quarter, trimming the margin to 1 again. They got a chance to take the lead after a Bryant turnover, but an illegal screen cost them. Hunter cashed it in with a drive with a finishing spin and bucket.

Parker Gordon made Catholic’s lone field goal of the second quarter at the 5:22 mark, making it 18-17 then neither team scored until Hunter nailed a step-back 3 with :50 left. Nichols followed with a steal that resulted in a trip to the free-throw line for Brunson. He made one of two to make it 22-17 at the half.

Those were the final free throws the Hornets would be awarded.

“Credit to Catholic,” said Abrahamson. “We were trying to attack the basket, but we were trying not to commit too many charges.”

And charges were being called. Along with Schroeder taking on early, Nichols and Adams absorbed charges on Rocket drives.

Despite early 3’s by Adams and Hunter then a nice drive to the rack by Jalen Montgomery, the Rockets were able to hang around for a while. When Fitz scored inside with 2:49 left in the third quarter, Bryant’s lead was 30-23.

And the Rockets had a chance to get closer, but Hunter made a steal and a layup to push it back to a 9-point differential. Another steal by Hunter led to a deuce on a goal-tending violation, giving the Hornets their first double-digit lead at 34-23 at the 1:17 mark of the third.

Onyeleweh answered then scored that last basket to open the fourth, trimming the margin to 7.

But Will Diggins posted up for a basket despite the Rockets’ attempt at drawing a charge, which had happened to the Hornets’ big man earlier in the game.

Catholic jumped into a press after a turnover and the Hornets sliced through it with Hunter dishing to Diggins for another bucket that pushed the margin back to 11 and forced a timeout by the Rockets.

When play resumed, Adams took a charge as Fitz tried to drive to the hoop. At the other end, Hunter scored to start the closing rush.

Diggins scored off the offensive glass then Hunter made another theft that led to a 15-foot jay by Adams. Another step-back triple by Hunter made it 47-27 with 3:15 left in the game.

“I thought we’d shoot it a little better in the second half just with the law of averages,” Abrahamson mentioned. “I encouraged them to keep taking good shots. We got to the basket a little bit more the second half as well. Things opened up as our defense really wore them down.”

Now 10-0 overall and 2-0 in the 6A-Central Conference, the Hornets will host Little Rock Central, one of the co-champions of 2020 — the final between the Tigers and Conway was cancelled when all sports were shut down due to the coronavirus in early March. With an overtime win against Fort Smith Northside on Friday, Central is also 2-0 in conference play.

The game will be at 6 p.m., after a JV contest at 5. There will be no girls game on Tuesday due to Covid issues for the Lady Hornets.