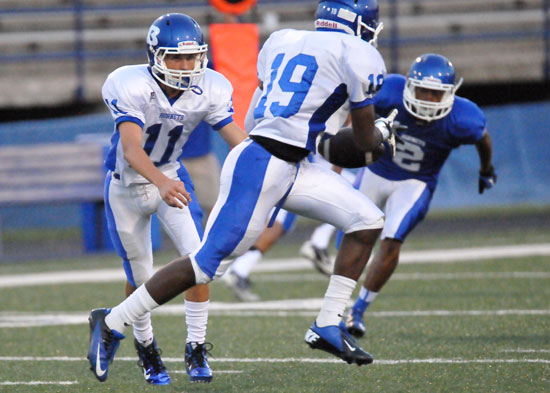 In 2012, the Bryant Hornets opened up the season with a 21-3 loss, abbreviated by lightning, at home to the rival Conway Wampus Cats. Hornets head coach Paul Calley traced a direct link back from that game to the team’s pre-season scrimmage against a Little Rock Hall team that had fewer than 30 players dressed out and was on its way to a winless season.

As defensive coordinator Steve Griffith said after the Conway loss, “Our scrimmage did not give us any information to help us improve.”

So Calley was determined to upgrade. He wound up going to the opposite end of the spectrum, in fact. Tonight his team will compete in a scrimmage against the defending Class 7A State champion Fayetteville Bulldogs and the defending Class 5A State champion Pulaski Academy Bruins at Bryant Stadium. The scrimmage starts at 6 p.m., with the Hornets and the Bulldogs squaring off. At 6:50, Fayetteville will scrimmage against PA. Bryant will return to take on the Bruins at 7:40 to finish up the scrimmage.

“After last year, we found out the hard way that you’ve got to have a challenge before you go in and play a team like Conway,” Calley said after the Blue-White scrimmage on Friday night. “I think we’ve accomplished that. The top team in 7A and the top team in 5A. We’ll see how we stack up.”

The Hornets officially open the 2013 season at Conway on Friday, Sept. 6.

An experienced offensive line, which includes Arkansasvarsity.com All-Senior Team pre-season selection Jordan Jones. On defense, it will help to have a veteran crew in the secondary.

Calley mentioned something else that should be a factor tonight and throughout the season.

“Our guys have all expressed to me that they feel like my expectations of them are too low,” he related. “I talk about a conference championship. But they never really came out and said it until last (Thursday).

I said, ‘Guys, you know what? It really doesn’t matter what I think.’ That’s what I’ve been trying to get through to them this whole time. It doesn’t matter what I think, it’s what they think. They know I’m going to work my butt off just like the rest of the coaching staff and we’re going to do everything we can to win. It’s up to them to take it one step further. I think they’ve figured that out.”