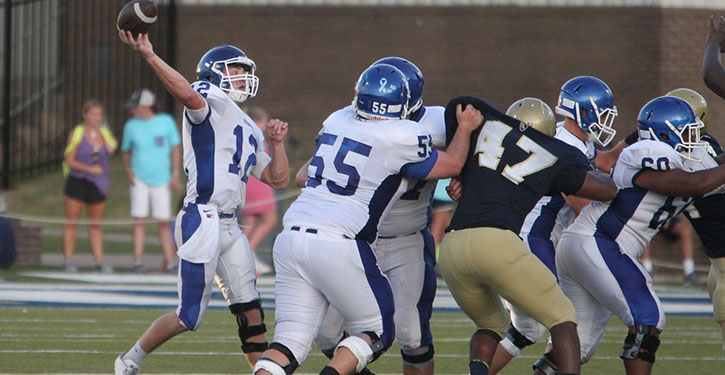 They weren’t really ready and it showed when the 2016 preseason benefit scrimmage against the Pulaski Academy Bruins went bad quickly for the Bryant Hornets. It not only wound up being an extremely one-sided contest but the Hornets lost a returning starter in their secondary for the season.

In the aftermath, there were plenty of folks predicting a lost season for the Hornets, who hadn’t suffered a losing campaign since 1998. Some were hoping they would win two or three games, maybe eke out a 5-5 record.

While admitting it was embarrassing, new head coach Buck James acknowledged that he and his staff had kept it simple in the scrimmage. The learning curve on the new plans for the offense and defense had been steep, everything wasn’t in yet and a lot of the stuff that was had yet to become second nature for the players. There was still uncertainty, too much thinking and not enough reacting.

And Pulaski Academy had little mercy.

While the Bruins wound up rolling to a third consecutive Class 5A State championship, the Hornets found their bearings, overcame all the second-guessing and uncertainty and stunned a lot of folks, including fans, coaches and each other with a nine-win season that included a foray into uncharted territory for a Bryant team. They reached the semifinals of the State playoffs, finishing one win short of playing for a State title.

It should be different tonight when the Bruins visit Bryant Stadium for a second pre-season benefit scrimmage. As James has said, the Hornets are light years ahead of where they were last year at this time, even much much better than they were at the end of spring practice.

He allowed that Pulaski Academy may again get the better of it tonight but it will, at least, be competitive.

The Hornets stand in nearly the opposite position as they season approaches. They’ve got experience now in the system even though considerable tweaking has been made to the offense under new coordinator Kirk Bock.

And, instead of folks wondering how few victories the team might accumulate, the speculation is all about how many will they win, can they capture a conference title, a State crown?

Of course, based on last year’s impact, it’s probably unwise to read too much into the results of the scrimmage.

The event will begin at 6 p.m. The teams will play four quarters of 12 minutes each with the JV and sophomore teams getting their share of work.

There will be no punting and extra points and field goals will not be live. Possessions will begin on the 30-yard line to start each half and after each score.

The scrimmage will be broadcast live on Fox Sports Arkansas 93.7 FM and 690 AM. It will also be live-streamed and can be viewed for free by going to www.fidelitylocal6.com (make sure to click the central Arkansas location on the main page), then you will see the watch live button: “Click to watch live”. Fidelity Local 6 is providing this service free of charge for live viewing. DVD’s available for purchase.