The Bryant Hornets junior varsity team took advantage of 10 walks, a hit batsman and a pair[more] of errors to forge an 8-1 win over the Benton Panthers JV on Tuesday night.

Alex Shurtleff, Hayden Daniel, Harrison Dale and Dylan Hurt combined on a one-hitter over five innings for the Hornets. They shut out the Panthers without a hit until the top of the fifth.

A five-run second inning put the Hornets on the road to victory. Walks to Hurt and Evan Lee started the uprising. Warner beat out a bunt for a hit to load the bases then Dalton Holt was hit by a pitch to force in a run. A walk to Tatum made it 2-0. With one out, Austin Caldwell added an RBI walk then Jackson lined a single into left center to drive in two.

In the third, Holt and Tatum walked then Drew Tipton’s grounder to second resulted in an errant throw that allowed Holt to round third and score.

Jackson reached on an error to start the fourth. Chase Tucker came in as a courtesy runner and took third on a wild pitch. He scored moments later on a passed ball.

Benton scored on a two-out walk, an infield hit, and a back-to-back hit batsmen in the top of the fifth but Bryant got the run back in the bottom of the inning then time ran out.

The Bryant fifth started with a lined single to right by Warner. He stole second before Tatum drew his fourth pass. Tipton walked to load the bases and Jackson walked to force in the final tally. 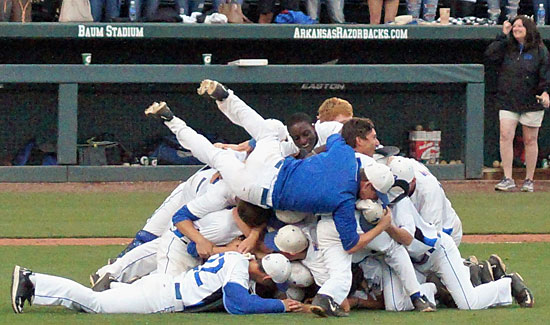