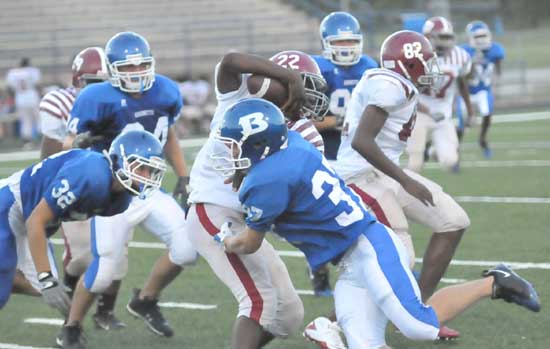 The Bryant Hornets junior varsity football team got a jump on the varsity as they opened their 2010 schedule with a 35-0 romp over the Pine Bluff Zebras JV on Monday night at Bryant Stadium.[more] 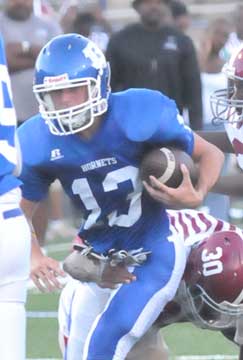 “As far as getting lined up and getting everything done, it’s probably the best we’ve looked in a JV game since I’ve been at the high school,” stated Hornets receivers coach Jason Hay. “Usually, there’s somebody lining up wrong or running wrong routes, a lot of dropped balls and stuff like that but I thought we came out and we were clicking. We were doing anything we wanted to, when we wanted to.

“It looked really good,” Hay added. “I was impressed with how the kids played and how hard they were getting after it.”

Sophomore quarterback Austin Powell threw for one score and ran for another. His touchdown pass went to Hayden Daniel for 31 yards. Junior Kyler Boyle connected on a 40-yard TD pass to Taylor Shaw. In addition, Dylan Holland picked up a touchdown on the ground from 2 yards out.

“The defense played really, really well,” stated Hornets defensive coordinator Steve Griffith. “Pine Bluff had very few first downs. There were a whole lot of three-and-outs which is always what we’re striving for.

“It was good to see that some of the guys that may not get quite as many reps in practice, that they are paying attention and they are being able to execute the things that we ask them to do,” Griffith noted. “That’s a big bonus to help us develop some depth for Friday nights, to get those guys in position where they may be able to get on the field not only on Mondays but to come out on Friday nights too and help us out.”

The JV team plays next on Monday, Sept. 13, at home against Little Rock Catholic JV. 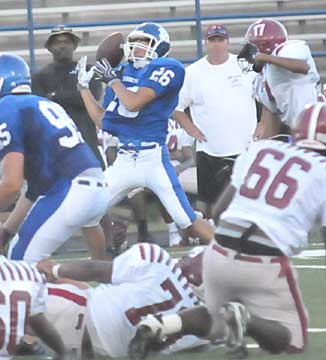