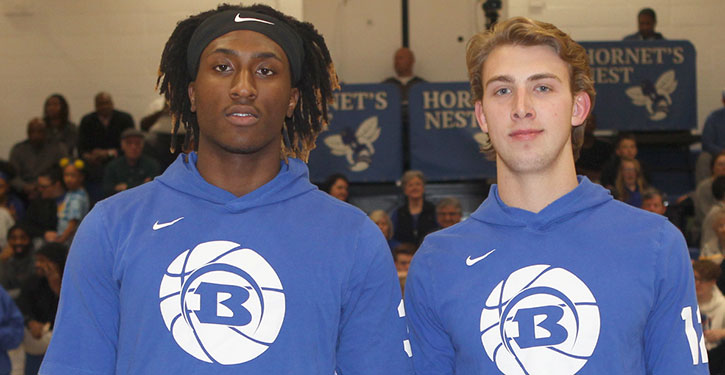 In the 51st(and, hopefully, final) year of the Bryant High School gym, exactly 30 years since the last time it happened, the Bryant Hornets have won a conference championship. They did it with a hard-fought 66-53 win over the defending State champion North Little Rock Charging Wildcats. It’s the first time a Hornet team has swept a Charging Wildcat team — they won 73-56 at North Little Rock on Jan. 22.

It was the 12thwin in a row for the Hornets, the 18thin the last 19 games and it gave them a two-game lead over second-place Conway with one game to play, at Conway on Friday.

The game was not only the final one at the old Hornets’ Nest but it marked Senior Night for the Hornets’ Rodney Lambert, who scored the first point of the game, and Ren Hefley, who scored the last.

Under head coach Mike Abrahamson, the Hornets have won their way to State semifinals twice but have never won a conference crown until now. The last time, it happened was the 1988-89 season.

But it’s only a step along the path of a greater goal for the Hornets. They’ll be the top seeded team from the 6A-Central Conference at the 6A State tournament at Bentonville West High School. They’ll earn a first-round bye and open play in the tourney on Thursday, Feb. 28, at 5:30 p.m.

“The highest we’ve finished was third,” said Abrahamson. “I think this is the fifth one overall. All the others were in the 80’s.

“That feels good,” he acknowledged. “We’re on the right track. What we accomplished tonight is special but, you know, we’ve got to finish, got to finish; just got to stay focused, come back tomorrow and do what we do. Stick to our routine. The season’s not over. This is not the end. Just like every other win, we’ll enjoy it tonight, move on tomorrow and, when the season’s over, we can look back and enjoy.”

Defense was, once again, huge for the Hornets who held North Little Rock to its second lowest point total in a game all season.

That was despite the fact that Collin Moore, probably their best player, was injured on the first play of the game. Moore tried to take a charge on a drive by Lambert and hit his head on the floor. He was out cold for a while, suffered a cut on the back of his head. He got up after a little while and was helped to the locker room and never returned to the game, though he did come back to join his team on the bench in the second half.

“It was fluke thing,” Abrahamson said. “I hate that for ‘em, because I hate to see anybody get hurt. But I tell you what, those kids that they had, they just pushed it right at us. Our kids took their very best shot. It was difficult, but our kids rose to the occasion.”

In a physical game, the Hornets never relented. Khalen Robinson, despite being face-guarded by the Cats’ Decorey Watkins all night (before Watkins fouled out), scored 25 points and had six rebounds. Lambert and sophomore Camren Hunter added 11 points each and Arlon Jenkins came off the bench for a big 9 points during a game-breaking second quarter.

Spencer Simes paced the Cats with 18. D.J. Smith added 12 and Tracy Steele had 7.

The Hornets broke out to a 6-0 lead, North Little Rock came back to tie it then Khalen Robinson drilled his first 3. After Simes drove for a basket, Hunter took a kick-out from Lambert and knocked down a triple.

And it went back and forth. At the end of the quarter, Bryant led 14-13 but North Little Rock scored the first bucket of the second period to take a lead.

That led to a Bryant run, 20-3, sparked by a pair of baskets by Jenkins. Robinson had a bucket and, after he hit a free throw, North Little Rock’s Craig Collier interrupted with a long 3.

Jenkins scored by posting up Smith and, moments later, freshman Khasen Robinson pumped in a 3 from the top of the key to make it 26-18.

After Watkins missed a free throw, Jenkins downed a troika. Lambert took a charge on defense and Robinson added a 3 off a dish from Jenkins to make it 32-18. Lambert closed out the surge with a pair from the line.

“Arlon was awesome,” declared Abrahamson. “He is under the radar and he shouldn’t be because he’s really good. I refer to him as our sixth starter. Coach (John) Harrison, my assistant, refers to him as Mr. Consistent. We do a player of the week every week, sponsored by Eric and Brooke Andrews State Farm and the last two weeks the winners have wanted to share it with him, to give him the reward because they respect him so much. Our team loves him. He brings it every day. He’s quiet so he’s not seeking attention. He’s just awesome for us. We couldn’t do this without him.”

Up 34-20 at the half, the Hornets extended the margin in the third quarter to 16 points. Smith opened the scoring then Robinson hit a pull-up jay and Hunter scored off the offensive boards to make it 38-22.

Simes led a charge that cut the margin to 10 but a jump hook by Hunter and alley-oop inbounds to Khalen Robinson made it 42-28 going into the fourth.

With the press on, the Charging Wildcats scored the first 5 points of the fourth quarter, which had the lead under 10. On a 50-50 ball, Bryant Catrell Wallace held onto a pass as Fudge, trying to beat him to it, flew down to the floor.

As the teams were setting up for an inbounds, Fudge said the wrong thing and was hit with a technical foul that led to two free throws by Khalen Robinson then, on the subsequent possession, a drive and dish by Robinson that set up Wallace’s basket and a 46-33 lead.

Robinson stopped the bleeding with two free throws and, moments later, he whisked a pass to Hunter after grabbing an offensive rebound in a scramble. Hunter scored and was fouled. His free throw made it a double-digit lead again.

Simes scored on a drive then the Hornets began to spread the floor after a timeout with 3:14 left.

“We just wanted to create some more space to attack,” Abrahamson explained.

As a result, Lambert hit a free throw, and, off a Wildcat turnover, the senior got out for a dunk to make it 55-42.

The lead was never less than 10 after that. It was 63-53 in the final minute. Hunter added a free throw with :36.2 left and, after both teams went to their benches in the closing seconds, Hefley, who contributed to so many Bryant football wins as a quarterback, drove from the right wing to score with :10 left, bring down the packed house with a punctuation point.