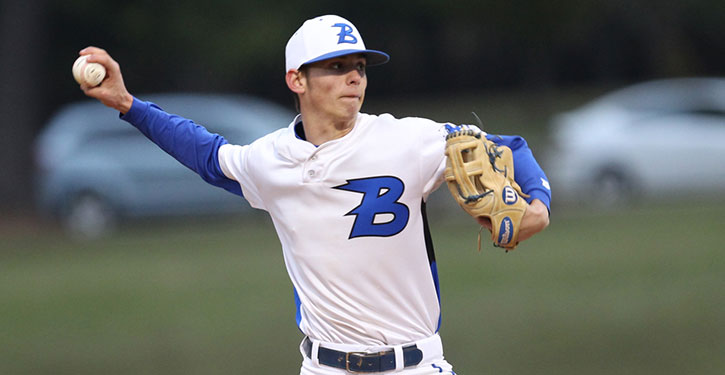 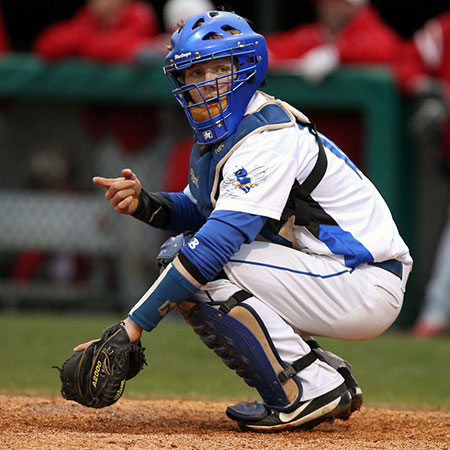 Catcher Jake Wright looks to the dugout for a pitch selection. (Photo by Rick Nation)

Jake Wright, Matthew Sandidge and Logan Chambers each drove in two runs and Seth Tucker had three hits to back the shutout pitching of senior lefty Beaux Bonvillain over five innings as the Bryant Hornets won their 7A-Central Conference opener, 8-2, over the Fort Smith Northside Grizzlies Tuesday night.

Northside managed a pair of runs in the top of the sixth but the Hornets got those back in the bottom of the inning as right-hander Coby Greiner closed it out on the mound.

Bonvillain struck out nine and walked one in his five frames, fanning a pair in each of the first four.

The Griz threatened to get on the board first in the top of the second. With one out, Grant Johnson singled, took second on a passed ball then held when Will Zuerker beat out an infield hit. Bonvillain got Corbin Dishner to ground to Konnor Clontz at third for a force at second but the ball was hit too softly to get an inning-ending doubleplay. Nevertheless, the Bryant senior southpaw ended the threat by getting Nate Hampton to whiff. 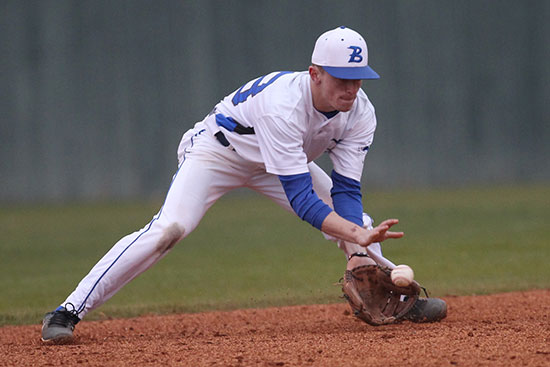 An error on Scott Schmidt’s grounder to third opened the door for the Hornets to get on the board in the bottom of the inning. Schmidt wound up at second on the play but was still there with two down.

Logan Catton kept the inning going by fouling off a pair of 3-2 pitches before earning a walk. Sandidge lashed a single to left to load the bases for Wright, who just got enough of a 2-2 pitch to loop it into right-center. Though Zuerker made a diving attempt coming in from right field, he came up short and two runs scored.

The Hornets tried to steal a third run by starting courtesy runner Grayson Prince early but Northside executed and relayed home in time to catch Sandidge to end the inning. 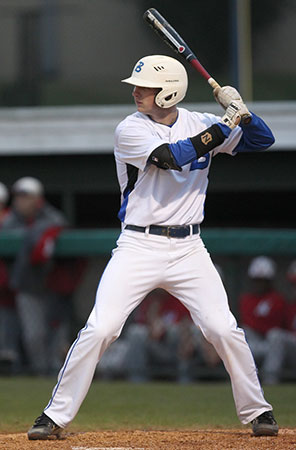 In the third, Joe Mills singled for Northside. After Bonvillain struck out Jake Rincon, Jackson Scrivner singled up the middle. Max Frazier fanned but the next batter, Hunter Linam drew a walk to load the sacks.

Again, however, Bonvillain wriggled off the hook, getting Johnson to fly to Greiner in left.

Cameron Coleman’s double went for naught in the bottom of the third but, after Bonvillain worked around a one-out single with a pair of strikeouts in the top of the fourth, the Hornets took control of the game.

A walk to Schmidt opened the home fourth. Bonvillain pulled a single into right then Catton sacrificed to put runners at second and third for Sandidge who found the gap in left center for a two-run double.

Wright kept the inning going when he was plunked by a Scrivner delivery. Tucker followed with a perfect bunt that he beat out for a single, filling the bags once more. With two down, Chambers came through in the clutch, slashing a single inside the line in left to drive in Sandidge and Prince.

Zuerker relieved Scrivner at that point and got out of the inning.

Bonvillian wrapped up his moundwork by pitching around a two-out single and an error in the top of the fifth. In the bottom of the inning, he singled and Sandidge was struck by a delivery but Zuerker and the Grizzlies escaped further damage.

Greiner started the sixth on the mound and got the first out before issuing a walk to Zuerker. Dishner slapped a single to right and, a wild pitch allowed the first run to score. Pinch-hitter Bobby Rauch singled Dishner to third then Mills hit a bouncer that Greiner couldn’t quite get to. Dishner scored to make it 6-2 with the top of the line-up coming to the plate.

But Greiner found his stride and got Rincon to ground into a force at second then induced a grounder to second by Scrivner to close down the rally.

In the seventh he would ease through an inning around a one-out single by Linam.

That came after the Hornets cushioned the margin a bit in the home sixth. Tucker slapped his third hit to right and Coleman worked a walk. A passed ball allowed them to move to second and third and, with one out and the infield in, Greiner singled up the middle to plate Tucker.

Schmidt picked up an RBI by getting a squeeze bunt down.

The Hornets face a tough challenge in their second league game this Thursday when they visit Lamar Porter Field and the highly-regarded Catholic Rockets. 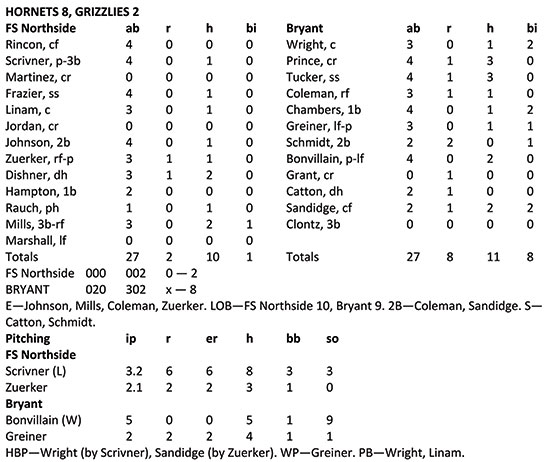