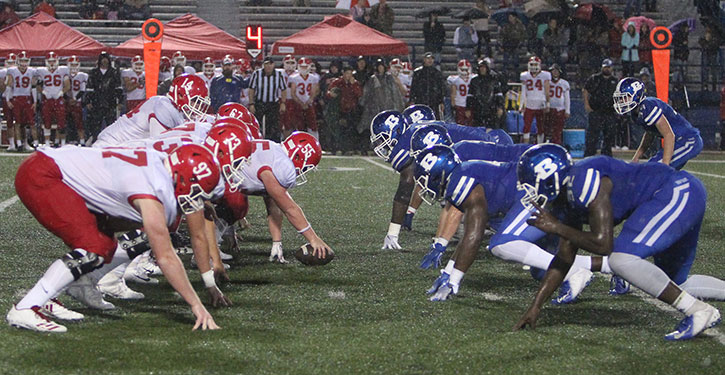 Hornets muscle up to blank Cabot 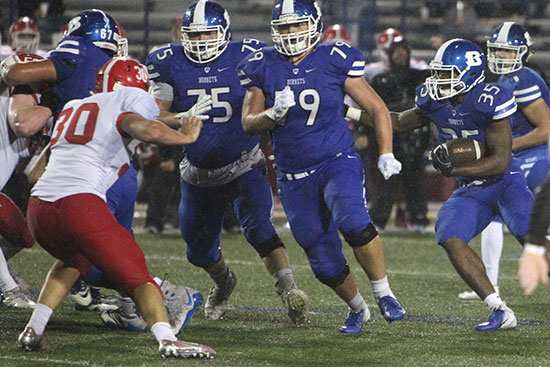 Usually, when somebody mentions a blitz, they’re referring to the extra pressure linebackers or defensive backs can put on a quarterback who’s trying to pass the ball. But there is such a thing as a run blitz.

During the week leading up to Friday’s 7A-Central Conference clash against the Cabot Panthers, Bryant Hornets’ defensive coordinator Quad Sanders noticed that, against the Panthers’ two-tight-end, dead-T offense, no one they had played this season tried to attack that vaunted ground attack with a run blitz.

The Panthers had been putting up some big offensive numbers even though they came into the contest 3-4 on the season. Outside of the 12 points they scored in their game against Little Rock Catholic which was played over two days because of lightning strikes, Cabot had scored no fewer than 24 points in any game this season and twice they’d scored 41 (in a loss to Benton and a win over Little Rock Central). 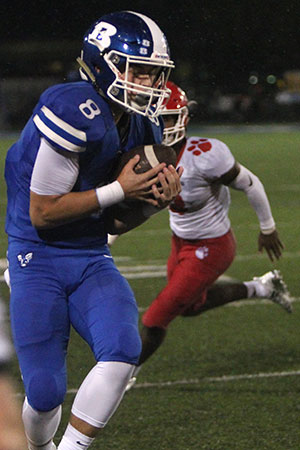 Receiver Jake Meaders hauls in a pass in front of a Cabot defender. (Photo by Rick Nation)

So, the Hornets’ defense lined up with five down and blitzed linebackers. In the first half, they would shift, move around on the defensive front, forcing Cabot to adjust its blocking scheme.

The Panthers made the necessary changes and had some success late in the first half but only managed to reach Hornets’ territory once besides a last possession that started on Bryant ground.

Sanders said he and d-line coach B.J. Schuler and linebackers coach Travis Queck, changed it up in the second half, with the line standing solid in their positions. It made the Cabot offensive linemen slow down as they came off the ball on the snap, looking for which defender to block. Cabot’s quick-hitting handoffs were stymied, and they only made one foray into Bryant territory.

The result was a shutout for the Hornets, their second of the season, in a steady rain at Bryant Stadium. The final was 27-0 as the Hornets improved to 7-1 overall and 5-0 in conference play, setting up a first-place showdown with top-ranked, unbeaten North Little Rock next Friday at the Charging Wildcats’ field.

It was the first time a Cabot team had been shut out since North Little Rock beat them 28-0 in the first round of the 2012 playoffs. It was the first regular-season whitewashing since Oct. 7, 2011 when the Charging Wildcats handed them a 48-0 shellacking. 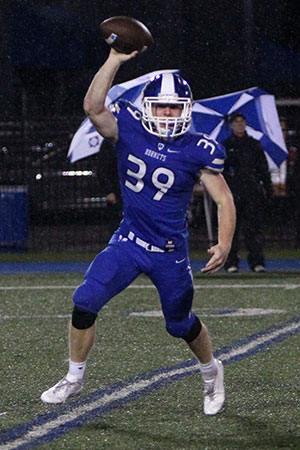 The last team other than North Little Rock to blank the Panthers was the Hornets, a 7-0 win in 2006.

Usually, Cabot, no matter who they play, is the most physical team on the field.

Such was not the case on Friday as the Hornets manhandled the Panthers much of the night. Cabot finished with 148 yards of total offense, all on the ground. For a team that’s goal is to gain at least 3 yards per snap producing long, time-draining drives, the Panthers’ averaged just 2.79 yards per snap, creating frustrations for the Panthers that spilled over into personal foul penalties.

“In a game like that, with the weather the way it is, it’s got to be a defensive game,” acknowledged Hornets head coach Buck James. “For us to pitch a shutout against that kind of football team, who’s scored points on everybody all year long and moved the ball on people, I really felt good about how our defense was playing.

“Offensively, the problems we had were mostly weather-related,” he noted. “We were only changing the balls out every two snaps, so it was a tough gig.

“I thought we ran the ball well,” the coach said. “I mean, we had five (offensive linemen) blocking against seven (in the box for Cabot). That’s a tough, physical, hard-nosed football team and I thought our guys stood toe-to-toe with them. I thought our kids competed extremely hard. I’m proud of them.” 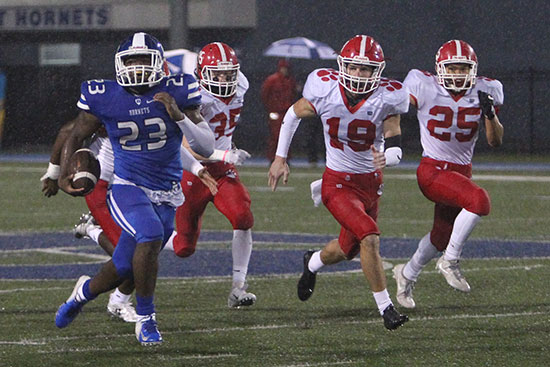 Latavion Scott (23) rushed for over 100 yards in just the first half. (Photo by Rick Nation)

The Hornets ran the ball and ran it well. For the game, they piled up 218 yards on the ground, 36 carries. In fact, in just the first half, senior Latavion Scott rushed for 110 yards on 17 carries, putting him right at the 1,000-yard mark for the season.

Senior quarterback Ren Hefley was 8 of 20 with two interceptions and 101 yards as he tried to find open receivers while Cabot dropped back eight defenders and pressured with just three.

“We’re going to throw the football,” James stated. “We’re going to spread the field out. They probably wanted us to run the football. They want to make it a five- or six-possession game. And that’s smart on their part because they’re a bend-don’t-break defense.

“I thought they had a good game plan for what they wanted us to do,” he mentioned. “But I thought (offensive coordinator) Coach (Kirk) Bock and those guys did a great job of calling plays and mixing up the pass and the run and it gave us opportunities. 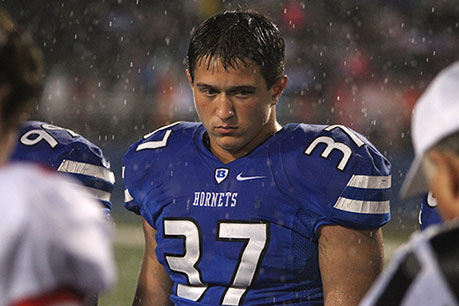 Linebacker Jakob Neel returned from a summer knee injury to get his first playing time of the season Friday night. (Photo by Rick Nation)

“We got in there a couple of times and didn’t score,” the coach noted, “but Grayson (Scoles) kicked the ball well. It’s good that we can do that.”

Scoles hit field goals from 29 and 32 yards, respectively, making the Hornets’ lead into a two-score advantage, always a tough situation from the ground-bound Panthers.

Scott set up Bryant’s first score with a 51-yard gallop to the Cabot 8. On his third carry after that, he reached the end zone. Scoles added the extra point to make it 7-0.

“Latavion broke that first one but you’re not going to run long touchdowns with the defense playing like they played us,” James commented.

In turn, the Panthers picked up a couple of first downs before quarterback Jessie Wingerter’s wild pitch on the option cost them 13 yards, though running back Bradley Morales was able to cover the ball. 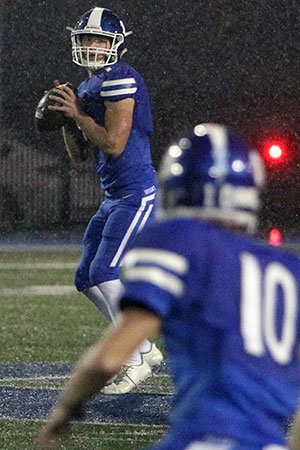 Catrell Wallace stopped Morales for no gain on the next snap and, a play later, the Panthers were punting.

The Hornets drove from their own 22 to the Cabot 5. Scott converted a third down then Hefley hit a 21-yard pass to Hayden Schrader to convert a fourth-and-2. A 15-yard strike from Hefley to Brandon Jett followed then Scott and the offensive line did the rest.

The Panthers picked up a first down but, on a third-and-2 at their own 43, they had running back T.J. Rogers stuffed for no gain by defensive tackle Kajuan Robinson.

A fumble undermined the Panthers’ hopes on fourth down and Nate Wallace recovered for Bryant.

Hefley completed a pair of passes to River Gregory to help the Hornets reach the 14 where they stalled. Scoles drilled his second three-pointer and it was 13-0 with 3:31 left in the half.

Late in the half, Cabot faced a fourth-and-3 at the Bryant 35. The Panthers allowed kicker Rhett Thurman to try a 52-yard field goal, but it was well short.

The Panthers’ best drive of the game started the second half. Using up nearly half of the quarter, they marched to the Bryant 11, grinding out every inch. On a third-and-6, fullback Graham Turner was stopped for no gain by Josh Salguerio and Kyle Green.

Cabot tried one of its three pass attempts on fourth down only to have linebacker Jake Wright swat it down at the line of scrimmage.

Bryant took over at its 11 and marched 89 yards in 11 plays. With Scott on the sideline for the second half, the running of Braylon Butler and Ahmad Adams was showcased. Hefley completed a pair of passes to Meaders before Adams scored from the 12.

So frustrated were the Panthers with the Hornets’ physical blocking, on the scoring run, a Cabot defender took the helmet off Bryant guard Tanner Wilson and threw it down picking up one of those penalties for unsportsmanlike conduct.

Wright recovered a Cabot fumble near the end of the third quarter. Hefley had a pass intercepted by De’Kairo Rudolph at the 3. He returned it to the 20 then taunted the Hornets, costing his team 10 yards.

The Panthers pushed it out to the 22 where they were turned back. Green stopped Rogers for no gain then Wright made a nice play to hold Rogers to 3 yards. On third-and-7 at the 25, Bryant’s Tristan Sehika nailed Wingerter  for a loss.

With reserves filtering into the lineup, the Hornets put the finishing touches on the victory when sophomore Austin Ledbetter connected with Meaders for a 49-yard touchdown. Scoles kicked it to 27-0. 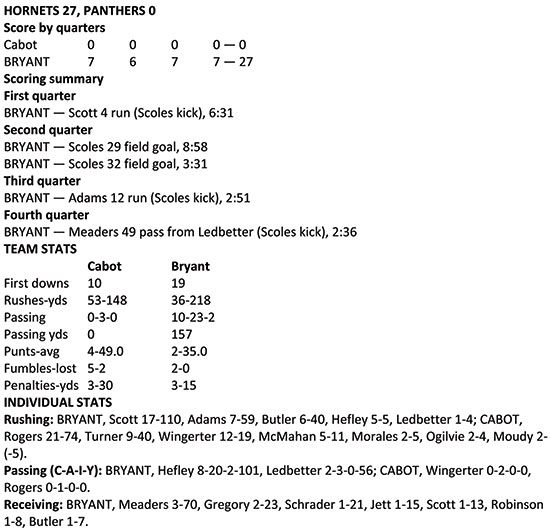