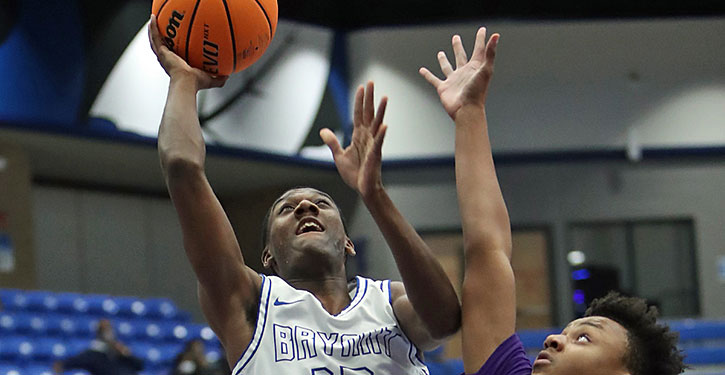 The Little Rock Southwest Gryphons were not going to go lightly.

With no State tournament in their futured and a dismal 2-17 season in their past, the Gryphons hit the floor at Hornet Arena with guns blazing on Tuesday night.

The homestanding Hornets, in their final regular-season game, came in with a 3 seed to State from the 6A-Central Conference and a 17-4 record that included a 62-27 drubbing of the Gryphons at Southwest.

Fortunately, though the Gryphons continued to shoot the lights out in the first half, the Hornets took advantage of their depth as head coach Mike Abrahamson tried several combinations before finding one that spurred a comeback.

Southwest wound up shooting 73 percent from the floor in the first half, but the Hornets hit seven 3-pointers by halftime and rallied to a 38-38 tie by intermission.

Bryant put the clamps on the Gryphons in the second half, holding them to just 15 points. The Hornets surged and won going away 75-53.

As a 3 seed for State, Bryant will play on Tuesday, March 9, at 7 p.m., at Fayetteville High School against a team to be determined by the 6A-West Conference’s postseason tournament.

It was not the same Southwest team Bryant had played before.

“Southwest played great, especially in the first half,” asserted Hornets head coach Mike Abrahamson. “As far as I know, that (70-percent-plus shooting) has never happened to one of our teams since I’ve been around.

“Credit to them,” he related.

Point guard Kendrick Ester, who didn’t play in the first game, scored 16 of his team-high 18 points in the first half including four 3’s. Martini Robinson and Emir Siddiq each had 10 on the night. Robinson, a last second entry into the starting lineup for Southwest, had nine rebounds.

“(Ester) was hitting tough shots,” Abrahamson said. “They came ready to go and it didn’t look like we did. That’s the best I’ve seen them play all year long.”

“We kind of kept subbing in until we found some guys that could get us going in the right direction,” said Abrahamson. “And we eventually found it.

“If we didn’t, it might’ve been too much to overcome,” he said. “I am disappointed that we got off to that start. And I didn’t call a timeout. We’re getting down and getting down. I may be too stubborn, but I wasn’t going to call a timeout. I was going to see what they would do on their own.

“Hopefully, it’s a lesson that we can learn that you have to respect everybody,” the coach added. “I thought we did respect them. I thought we approached the game the way we approached every other game. I was a little bit surprised to see that coming. That was part of it but another big part of it was Southwest just played really well.”

Hunter finished with 20 points and eight boards, three steals and two blocked shots. Kade Ruffner had 17 points including five 3’s. Fowler finished with 15, going 3 for 3 from deep, and Wallace had 10 with two triples.

Nichols scored 6 points and Newburn 4, but they put the quietus on Ester in the second half.

“Eventually, they wore on him a little bit,” Abrahamson noted.

Regarding the five guys that got the Hornets going, the coach said, “They guarded the ball with a little bit more urgency, contested shots a little bit better, and when somebody got it inside — elbow area or post area — we really moved our feet well, didn’t let them get any closer to the rim and made them take a tough shot. And then we rebounded.

“It was really good to see Darren Wallace come in and get to the free-throw line then make a few shots,” he commented. “Kade kind of kept us afloat for a while. He played well. Cam eventually did what Cam does. I don’t think he scored until midway through the second or something like that.

“Then Drake made some shots in the second quarter. Landyn gave us some good minutes. Then, at the end, those guys plus Cory — Cory made some big steals near the end, got to the free throw line, got an ‘and-one’. That was nice.”

“We eventually had some guys that stepped up and that’s what we needed,” Abrahamson said.

The Hornets’ only points of the first six minutes of the game was a 3 by Ruffner. But Ester knocked down three triples during that opening salvo.

Ruffner drove for a layup but Ester answered. Fowler popped a pair of 3’s on either side of a layup by Siddiq.

Bryant trailed 23-11 at the first break.

Wallace was fouled on a 3-point attempt early in the second quarter. He made two shots and his missed third attempt was rebounded by Fowler who scored on a driving jumper. After a Southwest turnover, Wallace canned two more free throws and the Hornets were within 23-17.

Siddiq drove for a basket but, after a Bryant timeout, the Hornets went on a 14-0 run to build a lead.

That burst started with Folwer’s third trey. Wallace followed up with one from distance. With 5:23 left in the half, the Hornets trailed 25-23 and had Hunter at the free-throw line. He made his first shot but missed the second. Wallace controlled the rebound and got the ball outside to Hunter. The resulting 3 gave Bryant’s its first lead at 27-25.

Newburn followed up with a steal and a layup to give Bryant a 4-point lead.

Southwest regrouped after a timeout. Though Hunter added two free throws to the lead, the Gryphons broke a drought with an 18-foot jumper from Kylon Evans.

By the 1:26 mark, Southwest had regained the upper hand, 36-33. Hunter and Robinson traded baskets then Ruffner capped the half with a 3, tying the game up.

The game was tight through the end of the third quarter. Bryant took a 49-47 lead into the fourth.

Newburn fed Hunter for a basket then Ruffner splashed another 3 to extend the margin to 7.

Southwest wouldn’t go away. With five minutes left, the Gryphons were still within 58-53.

Siddiq’a basket at the 5:02 mark, however, proved to be the last of Southwest’s points. Bryant closed the game on a 17-0 surge.

It started with Hunter and Wallace combined on a steal that Ruffner cashed in with his fourth triple. Fowler drove for a layup off a turnover then Nichols made a steal that led to a three-point play.

Nichols made another theft and Hunter scored off the offensive glass to make it 68-53. Ruffner and Hunter added 3’s before it was over.

Though the final score was lopsided, Abrahamson had a warning for his team about overlooking an opponent:

“If we do that again, with the caliber of opponents that we’re going to have to play, it’ll be the end of our season. Hopefully, we don’t do that.”