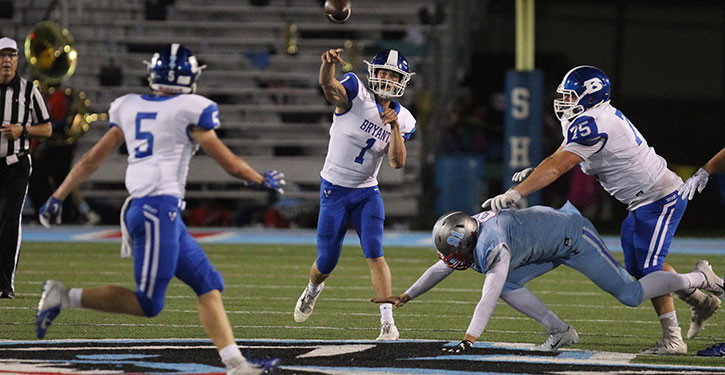 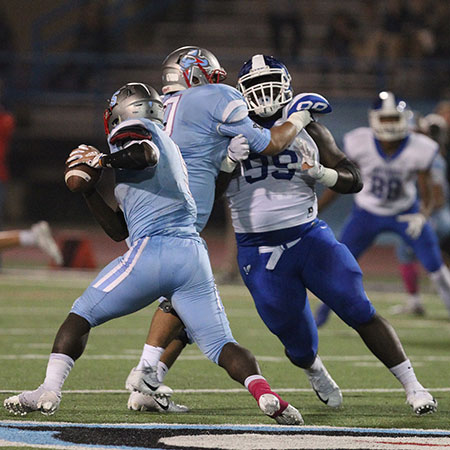 Kajuan Robinson (99) tries to fight through a hold to get to Southside quarterback Taye Gatewood. (Photo by Rick Nation)

FORT SMITH — For a while the theme of Friday night’s 7A-Central Conference football game between the Bryant Hornets and the Fort Smith Southside Mavericks appeared to be tipped passes and yellow flags.

But, once the Bryant Hornets’ offense got untracked late in the first half, most doubt about the outcome of the game melted away. That’s because of the Hornets’ defense as well, which continued to make the plays when they needed them.

Latavion Scott rushed for 202 yards on 26 carries and Ren Hefley threw for 255 yards and three touchdowns and the defense held the Mavericks to their lowest point total in a game this season and just 236 yards of total offense in a 31-14 victory.

Bryant improved to 6-1 on the season and 4-0 in league play, maintaining a first-place tie with North Little Rock. 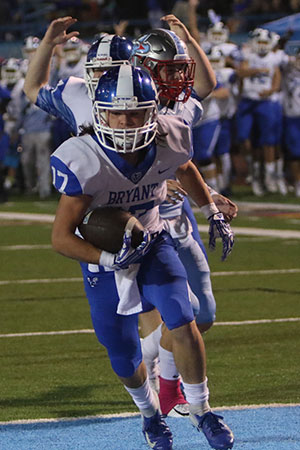 Jaeger Burks steps into the end zone after catching a deflected pass. (Photo by Rick Nation)

There were four tipped passes in the first half. Three of them resulted in interceptions and another turned into a touchdown reception. The yellow flags flew much of the night. There were 16 penalties that were actually marked off, 12 of them against the Hornets for 113 yards. The flags stalled Hornet drives and extended Maverick marches.

But they did not thwart Bryant’s clinching touchdown drive in the second half. Despite three penalties, including a hold, a false start and an illegal block, the Hornets marched 94 yards in 10 plays, featuring Scott and Ahmad Adams as every yard was picked up on the ground.

When Adams scored from 3 yards out and Grayson Scoles added the extra point, Bryant had a 28-7 lead that was never really threatened.

The Mavs, with the aid of a face-mask penalty and a pass interference flag, drove for a touchdown late in the third quarter to cut the margin to 28-14 but Bryant countered with a march that used the last 1:30 of the third quarter and nearly half of the fourth. The Hornets reached the Mavs’ 5, but a false start penalty knocked them off schedule and Scoles came on to boot a 26-yard field goal to seal the victory. 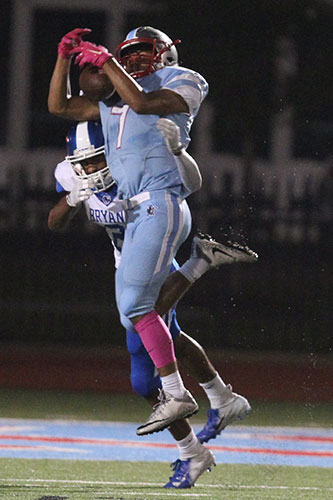 Initially, it was all Mavericks. On the opening drive, running back Ricardo Savoy broke a 46-yard touchdown run to highlight a 63-yard drive on which quarterback Taye Gatewood completed both of his passes.

The teams traded punts, which wound up pinning the Hornets back at their own 10. On the third play of the drive, Hefley fired to Meaders. But it went off his hands and into the arms of Southside safety Mason Gregory, who returned it to the Bryant 38.

It took eight plays including a fourth-down conversion, but the Mavericks reached the Bryant 6. On first and goal, Kyle Green stopped Savoy for no gain. On second down, Gatewood rolled right and tried to fit a pass into a small window near the sideline. Bryant’s Andrew Hayes broke perfectly on the ball and picked it off with a diving catch.

The Hornets were on the move, reaching the Southside 48 when personal foul penalties on consecutive plays pushed them back to their 25. A false start made it third-and-23. 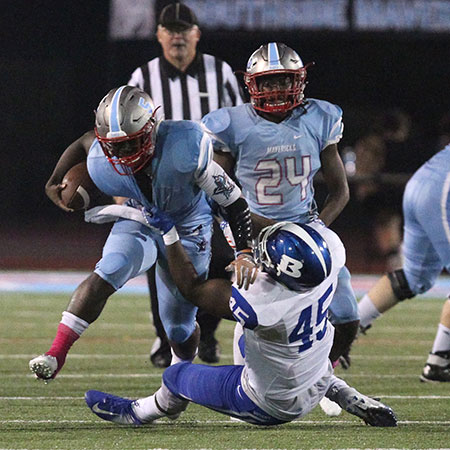 But they nearly converted. River Gregory got behind the Southside defense and Hefley was on target with his pass at the Southside 40. The ball came off Gregory’s hands and into the arms of Mason Gregory who had his second interception.

His return had Southside just 35 yards away from a two-score lead. Bryant linebacker Catrell Wallace knocked down a pass then Daylan Land and Nate Wallace stopped a scramble by Gatewood for a loss. On a fourth-and-9, Gatewood’s pass went off the hands of his receiver Erich Schwarz and into the arms of Bryant linebacker Jake Wright.

That set up the Hornets’ game-tying touchdown drive, a 71-yard march in nine plays with no penalties. But it did have a bad snap that cost the Hornets’ 17 yards after they’d reached the Southside 29 via Scott’s running and a 13-yard completion from Hefley to Hayden Schrader. 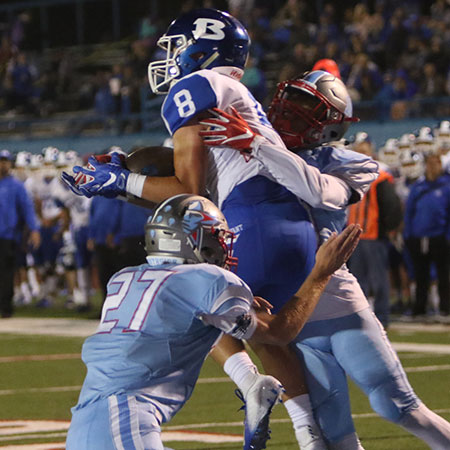 Jake Meaders cradles a pass in between a pair of Southside defenders for a touchdown. (Photo by Rick Nation)

But the loss didn’t stop the Hornets. Hefley kept for 10 yards then connected with Burks for 14. On a fourth-and-3 at the 22, Scott blasted for 11.

That’s when the third deflection occurred. Hefley’s pass hit Southside safety Bennett Weindel or Hornet’s H back Ty Jones and deflected into the arms of Burks, who ran it in for the touchdown.

Southside made a bid to regain the lead with a drive that was aided by a pass interference penalty. Starting at their own 26, they reached the Bryant 23 where, on fourth-and-3, Gatewood set up a screen for Savoy. But Land forced Savoy to cut it back inside where he ran into Derrick Rose and Nate Wallace and was stopped for no gain.

The Hornets took over on downs and, in a most impressive three-play drive, took the lead. Scott started it with a 22-yard gallop. After he picked up 6 more, Hefley found Robinson on a deep post for a 49-yard touchdown to make it 13-7. 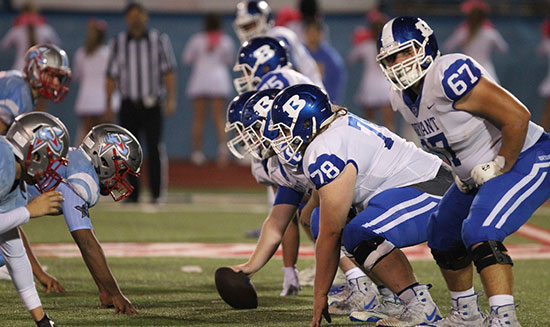 The defense added to the lift when, on Southside’s next snap, Gatewood threw a lateral to Savoy only to have Hayes there in his face. With help from Austin Bailey, Hayes brought him down for a loss of 6.

Two plays later, the Mavs punted it back to Bryant and the Hornets, with exactly two minutes left in the half, drove 63 yards for another score. Hefley’s first two passes were incomplete but then he completed six of the next seven as the Hornets rushed the ball just once on the march. Botti had three of the receptions on drag routes over the middle including a fourth-down conversion that broke for 17 yards. 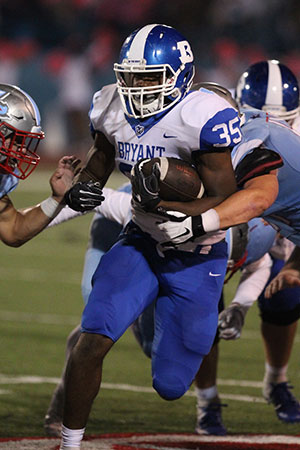 Meaders caught an 8-yarder to set up the touchdown then made a tough catch in traffic from 15 yards out for the touchdown with :13.4 left in the half.

Scott, running in the wildcat formation, got in for the two-point conversion and it was 21-7.

On the Hornets’ second-half touchdown drive, Scott had runs of 19, 16, 30 and 11 yards. He also broke for another 19-yard gain but half of it was negated by a downfield penalty.

The big play of the next series was a 40-yard completion from Hefley to Treyvon Herron. Scott ran it for 8 yards to the 32 where the Hornets faced a fourth-and-2 but, on a play on which the timing was off, Hefley took a snap before most of the offensive line was prepared to block and he was dropped for a 10-yard loss.

Southside took over on downs. Three penalties against the Hornets and a 23-yard run by Savoy set up Gatewood’s keeper for a 7-yard touchdown with 1:33 left in the third quarter.

That’s when Bryant responded with another long, time-eating drive to their field goal. Hefley was 3 for 5 passing on the 16-play march. The big reception was for 16 yards to Meaders. Scott’a 15-yard burst got to the 5 but a false start penalty helped stop the drive leading to the field goal.

Southside’s answering possession reached Hornets’ territory before Bailey sacked Gatewood and Nate Wallace and Catrell Wallace stopped him for a loss of a yard, setting up a fourth-and-20.

The Hornets host Cabot for homecoming 2018 next Friday. 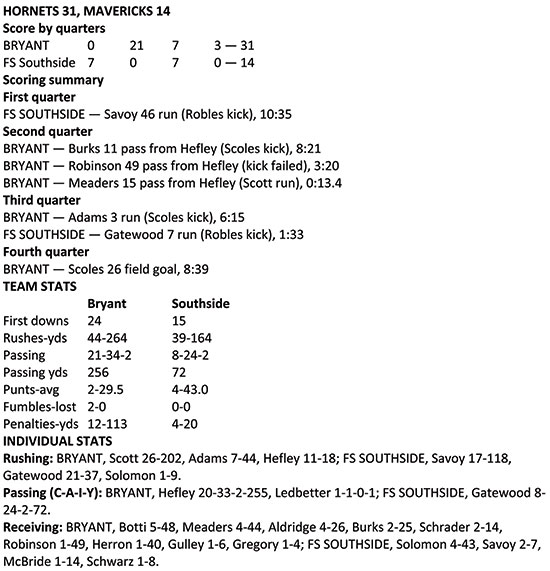