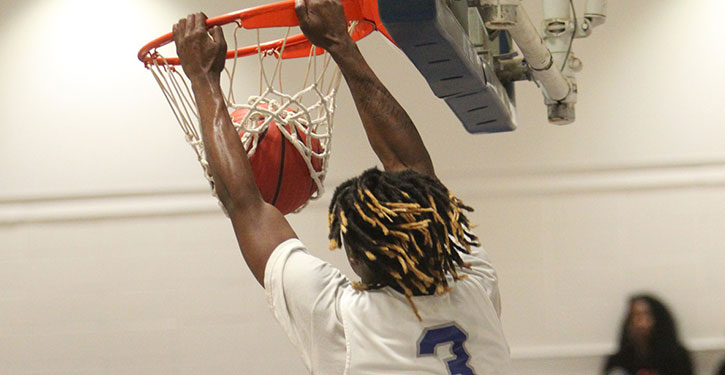 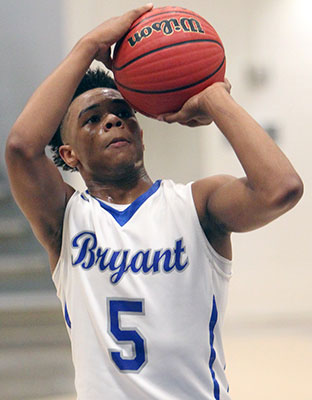 Camren Hunter eyes the bucket on a jumper. (Photo by Rick Nation)

At the end of the first half of the benefit scrimmage held at the Hornets’ Nest on Thursday night, the White Hall Bulldogs had 18 points and 20 turnovers, and they trailed the Bryant Hornets by 40 points.

Bryant called off the press at halftime but still outscored the Bulldogs, 23-12, as the mercy rule went into effect.

With the junior varsity teams on the court in the fourth quarter, Bryant extended the advantage to a whopping 87-32 at the end.

“I liked the way we pressured, and I liked the way we attacked on offense,” said Hornets head coach Mike Abrahamson. “You know, it’s a benefit game and you can’t get too high or too low. It’s only Nov. 8. But, for November, I liked what I saw.”

The Hornets scored the game’s first 12 points and held a 20-4 lead at one point in the first quarter. Bryant then scorched the nets in the second stanza, hitting 14 of 16 shots from the field including 6 of 7 from 3-point range and all four of their free throws, scoring 38 points in the quarter to make it 58-18. For the game, the Hornets drilled 14 3’s in 32 attempts. They were 31 of 51 from the field and 9 of 15 at the free-throw line. 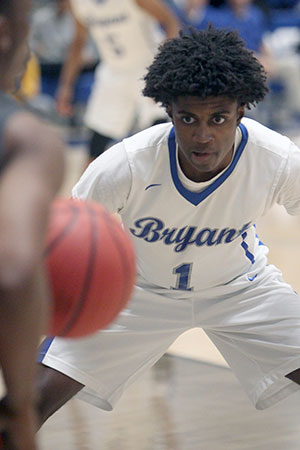 The Hornets also held their own on the boards against the taller Bulldogs. Each team finished with 23 caroms. Robinson had six for the Hornets, who actually had a 16-15 advantage on the glass before the JV teams took over.

That was one of the things, Abrahamson wanted to see, if his team would be able to rebound, particularly on the defensive end. He didn’t have the stats when he said, “We’ll have to see the final numbers but the look of it was better. And that’s a concern so, yes, they did pretty well, without seeing the stats. We had some guys going up there and getting them. That was good.”

But it was the hustling defense with quick hands and feet that particularly pleased the coach.

“And communicating on defense was good,” he said. “That’s something I wasn’t sure how they were going to do tonight.

“You never know,” he pondered. “You practice things and emphasize things and you’ve got a benefit game and it’s, ‘Okay, are we going to do those things or are we going to do other things?’ I liked what I saw. We didn’t throw everything we had at them in terms of variety. But we played hard and the things that we did, our guys did a good job of executing.”

The Bulldogs had some talent but just never quite got their feet under them. 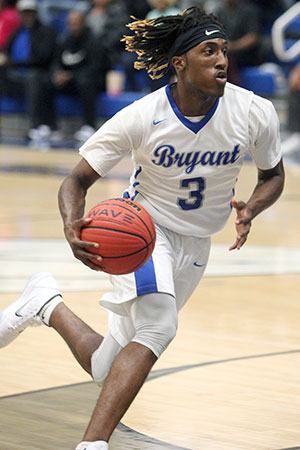 The opening surge began with a layup by Hunter off a White Hall turnover. Lambert made a steal and Khalen Robinson cashed it in with a 3. Hunter hit another layup as he was being fouled then Lambert popped a 3 and Colby Washington laid one in to make it 12-0.

It was 14-4 and the Bulldogs had the ball when Payne made a steal and a layup. After a free throw by Hunter, Robinson drained a long 3 to make it 20-4.

White Hall’s 6-5 post Zavion Jackson got a dunk and Hunter Reed hit a jumper to cut the margin in the final minute of the quarter.

Adams made a steal that led to his first 3 to start the second quarter. Korinthian Thomas scored for the Bulldogs then the Hornets went on a 13-0 run that included two more triples from Robinson, Lambert’s dunk and a steal and layup by Hunter.

It was 45-16 with 3:04 left in the half. Lambert hit a layup and A.J. Jenkins went back-to-back on 3’s with Payne. Another layup by Hunter and a 3 for freshman Khasen Robinson made it 58-16 before Jackson beat the buzzer with a dunk.

To start the second half, Hunter had a three-point play and Lambert pumped in a triple before Jaden Crater scored for White Hall. And the onslaught only got worse for the Bulldogs, whose coach Marc Stringer told the Bryant scoreboard operator, Lawrence Jefferson, to just let the clock roll.