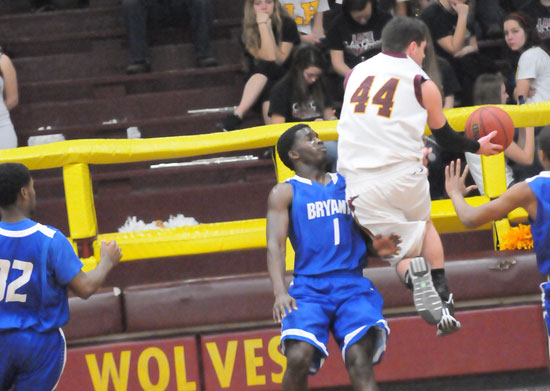 PEARCY — It’s an indication of how well the Bryant Hornets have been playing that head coach Mike Abrahamson had to ponder when asked, after this team’s 76-47 tour de force against the Lake Hamilton Wolves on their own floor on Tuesday night, if it was the best his team had played this season. 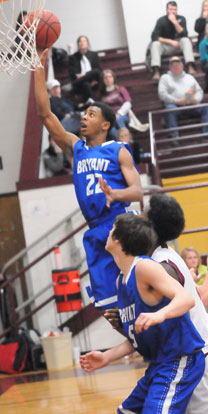 Romen Martin (22) goes up for a shot at the basket as teammate Caleb Strain gets into rebounding position. (Photo by Kevin Nagle)

“I don’t know if it was the best that we’ve played — probably was — most complete game offensively, defensively,” he answered. “I don’t know but, I’ll tell you this much: It was my favorite game to coach. That was fun. I love that. I love playing full-court man. I love no tricks, no traps, just sit down and guard you and make it as hard on you as possible from baseline to baseline, to just try to overpower you. Tonight, we were able to do that.”

Indeed, the Hornets, who have been a zone team — primarily 3-2 — deployed in a hungry man-to-man defense against the Wolves and, by halftime, piled up a 20-point lead, 42-22. The margin was never less than 21 and ultimately reached 29 early in the fourth quarter then again at the end of the game.

“We probably caught them off-guard a little bit so when they come back to our place, they’ll be a little bit more prepared for that,” Abrahamson allowed, referring to the Wolves’ visit to Bryant on Feb. 21. “And I understand that. But tonight was fun for me. I really enjoyed watching our team give such a great effort and execute and do things we haven’t done that often, like offensive rebounding. I think one thing kind of led to another. They were just feeding off this energy that started with our defense. I’m proud of them.”

Indeed, the Hornets forced 18 turnovers and out-rebounded the Wolves 33-20 with 12 caroms coming at the offensive end. All five starters wound up scoring in double digits, led by Greyson Giles’ 20. Sophomore Kevin Hunt added a season-high 15. Senior guard C.J Rainey, the team’s leading scorer for the season, scored 13 but just 2 of those in the second half when he concentrated more on setting up his teammates.

It was also frustrating for the Wolves that, on their home floor, they were 2 of 3 from the free-throw line while the Hornets, who attacked the basket all night, went 18 of 26.

But, as Abrahamson indicated, the defense was key.

“I just felt like we could pressure them and wear on them,” he related. “They’re such good shooters. 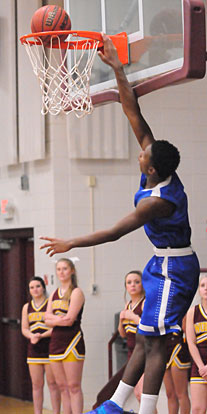 “We have worked on it a lot, especially in the pre-season, but not lately and I think it showed near the end of the game,” he mentioned, regarding the man-to-man. “They were so tired. They’re not used to doing that. It was a game-plan thing but they executed it and I thought that we could do it.

“After the Texarkana, at the end, when we came back — that was encouraging to see that we could pressure a little bit,” he added, referring to the Hornets’ comeback victory on Friday night at home, 53-43. “And it led to a lot of stuff offensively. There are so many coaches in the world that just believe every basketball game comes down to which team gets more easy baskets and we got a ton of easy baskets tonight, off steals, turnovers, offensive rebounds.”

Another key was the way the Hornets attacked the basket. They opened with 3-pointers by Martin and Giles to take a 6-0 lead. Lake Hamilton went to 6-6 sophomore Jason Burks who scored their first 6 points and had the Wolves within 8-6.

But Burks fouled Giles on a drive with 4:39 left. Hunt made a steal and wound up face-to-face with the Lake Hamilton post player on the left wing. Hunt pump-faked to get Burks in the air then jumped into his shot and was fouled.

With two infractions, Burks had to come out of the game.

Corey Worley scored inside for the Wolves to keep them within 11-8 but Giles splashed another 3, Rainey canned a hanging 12-footer then Giles turned in a three-point play to make it 19-8.

After Andrew Broadbent and Hill scored for Lake Hamilton, Rainey pumped in a step-back 3 to beat the buzzer, making it 22-12 going into the second stanza.

Bryant outscored the Wolves by 10 again in the second quarter to produce the 20-point margin.

Lake Hamilton was 12 down as late as the three-minute mark after Martin and the Wolves’ Spencer Turner traded 3’s but then the Hornets closed with a 10-2 surge that extended to 16-2 at the start of the third quarter.

Rainey started the blitz with a pull-up jumper on a drive up the baseline. He and Martin combined to force a turnover that Crosby cashed in at the free-throw line. Levi Rengstorf interrupted for the Wolves but Croom trumped that with a three-point play.

Crosby got to the line again after making a steal and, in the final seconds, Rainey added a free throw to make it 42-22.

To open the third quarter, Rainey canned an 8-footer then Hunt made a steal and layup. Crosby made another theft and missed his layup but followed with the rebound and tossed to Giles for an easy deuce to make it 48-22.

Burks scored inside for the Wolves’ first bucket of the second half. Stefan Daily drove for a bucket but a three-point play by Hunt and a basket inside by Crosby was followed by a turnover and a follow hoop by Crosby that produced the 29-point margin, 55-26.

It was 61-34 going into the fourth quarter. Two free throws by Hunt pushed it back to 29 again then Lake Hamilton put together an 8-0 run. But the Wolves were unable to get any closer as Hunt, Martin and Giles scored before they could scratch again.

The win improved the Hornets to 9-8 overall and 5-1 in the South Conference. They maintained their share of the league lead with Benton, which moved to 5-1 with a win over El Dorado on Tuesday. Bryant hosts El Dorado this Friday.