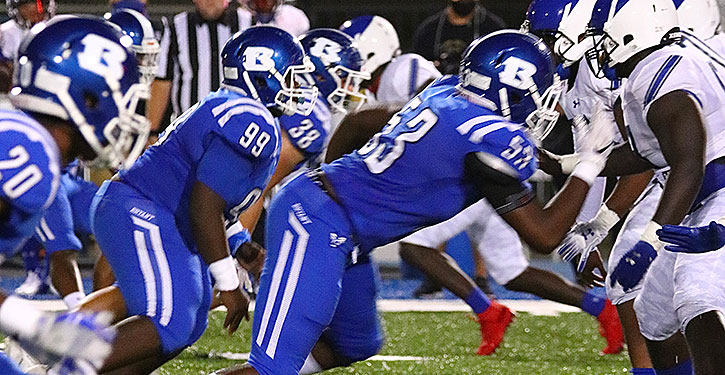 No current opponent on the Bryant Hornets’ schedule has been a rival for as long as the Cabot Panthers have. The two teams have met on the gridiron 44 times, on and off since 1953. And Cabot holds a 29-14-1 advantage over that time even through Bryant has won the last four meeting.

The two schools (and communities) have kind of grown apace on parallel trajectories.

Cabot used to base their success on an old winged-T grind it out offense and a 50 defense but, since last year’s hiring of Scott Reed as head coach, the Panthers have opened it up on both sides of the ball, more passing on offense, more multiple on defense.

Though they were just 6-5 in Reed’s first year, they made the playoffs but lost at Fayetteville. In Reed’s second year, the Panthers are 5-1, losing for the first time two weeks ago to Conway 52-49.

So, the Panthers have had an extra week to prepare for the top-ranked Hornets, winners of 23 games in a row, after a 70-0 victory at Southwest last Friday.

Like the football programs, Reed and Hornets head coach Buck James go back. They’ve probably locked horns against each other more than any other James can recall, going back to Reed’s days at El Dorado and James’ at Camden Fairview. The Bryant coach, who will be going for his 50th victory since coming to Bryant in 2016, says they talk on the phone weekly. There’s obviously a lot of mutual respect.

“I think we’re very similar in what we try to do,” James said. “I think he’s a really sharp, innovative football coach and he’s a guy that knows how to win. In year two of that program they’re 5-1.

“They were winning before he got there but they’re winning a different style and probably the toughest thing to do is go from one completely different offense to another,” he noted. “I mean he had guys that’d never thrown a pass in a game being quarterbacks and guys who never caught a pass in a game being receivers and guys that played with their pads over their toes run blocking turn into pass setters. He’s done it really fast, probably a lot faster than people would imagine, in year two in a program that won 300 football games running dead T and running 50 defense and he’s changed all that culture and they’re still able to win. That says a lot about what he is capable of doing as a coach. As the program matures under his leadership, I mean they’ll be guys that will be playing for State championships someday.

“There’s no doubt about it,” the coach continued, “He will get them to the next level. They’ve got to mature in that system and keep having success and the success will bring more success.”

James acknowledged that, short of the Trinity Christian team from Cedar Hill, Texas, that the Hornets defeated 44-40 on Sept. 18, Cabot is probably the toughest team the Hornets have played to this point in the season.

“I think it will be,” he said. “They will be well coached. They’re very well-schooled. They’re not going to beat themselves. I don’t know exactly the point number, but they’ve got to be averaging over 30 points a game. So, they are able to put a lot of points on the board.

“Unfortunately for them, they’ve given up a lot of points,” the coach mentioned. “But that’s the story for a lot of teams. I mean teams aren’t getting to tackle as much; no spring football and all that stuff. It’s made it more like backyard football. If you see anything consistent throughout this whole year, a lot of defenses are giving up a lot of points. As the year goes on, I think that you will see defenses starting to come around a little bit. I think that’s what (Reed’s) hoping for. That’s what we’re hoping for.”

For Bryant, quarterback Austin Ledbetter is 74 of 120 with 18 touchdowns and three picks, while not playing much in the second half of five of the six Hornets’ games.

His top receiver is Hayden Schrader with 26 catches for 485 yards and six touchdowns. In all, 13 different receivers have caught passes for the Hornets this season.

On the ground, Tanner Anderson leads the Hornets with 508 yards on 65 carries with eight touchdowns. Anderson was held out of last week’s game due to a minor injury. Xavier Foote has shared time with Anderson and picked up 240 yards on 37 tries. Jamarrien Bracey has 272 yards rushing on just 29 totes.

And how would he describe his own team?

“We play really hard,” James said. “I think we’re athletic and, in some places, I think we’re very athletic. I think our offensive line is playing really well, consistently over the whole season. Our running backs have run the ball really well. We haven’t thrown and caught the ball quite as good as I would like for us to, but it’s been enough to offset what we don’t do right in the running game at times. It’s opened up the running game.

“So hopefully they keep getting better and our defense keeps getting better,” the coach said. “We play a lot of guys on defense. I bet we play 20-plus guys in a close game. I think that’s going to help us be a better football team down the road too.”

James was particularly proud of his special teams in the game against Southwest.

“You know that’s probably half the battle nowadays just getting guys to play on special teams. Our kids took some ownership of that.

“I thought we were very versatile in what we did. I thought we played a really complete ball game. You know, (Southwest has) got a ways to go but they knew that going into this season. But I like the way our kids took the approach and the way they handle themselves.”

As he did the week before, James emphasized the fleeting nature of football this season with Covid hanging over everyone’s heads.

“It’s just the truth of it,” he allowed. “I mean, if you get quarantined now, you’re our for the rest of the year. So, every game matters. As hard as they’ve worked, as much as they’ve been through for the last three years — our seniors and our juniors the last two years — you better take it like this might be your last practice, this might be your last game, not for only injury sakes, but because of sitting in an English class next to somebody who’s contracted the virus. You know, you don’t have to get it, you just have to be around somebody. It could be devastating for somebody’s, for the end of their career, to be finished, sitting at home. They’ve got understand that there’s no tomorrow guaranteed as a player, as a team or as a program. I think our kids have got to have that in the back of their minds every day.

“I think it’s a combination of a lot of things that they’ve had to go through that makes them appreciate being out here doing this a lot more.”