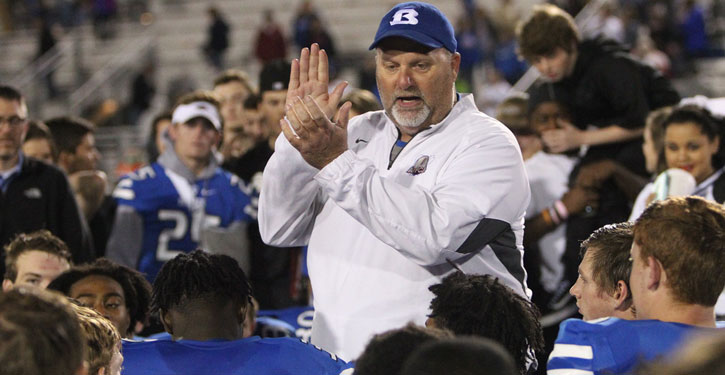 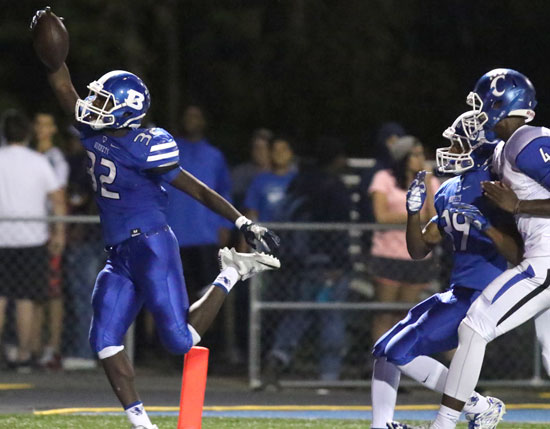 Antonio Todd reaches the end zone at the end of his interception return as teammate Andrew Hayes trails the play. (Photo by Rick Nation)

You know you’ve got it going on when your team doesn’t play its best but still defeats a good team, a longtime rival and that’s just where the Bryant Hornets found themselves Friday night. The Hornets persevered, despite a penalty-plagued performance, to dismiss the rival Conway Wampus Cats, 21-7, on Senior Night at Bryant Stadium.

Improving to 7-3 on the season, the Hornets nailed down the No. 3 seed from the 7A-Central Conference to the State playoffs. They’ll host the Springdale Bulldogs, the sixth-seeded team from the 7A-West next Friday to begin the second season. 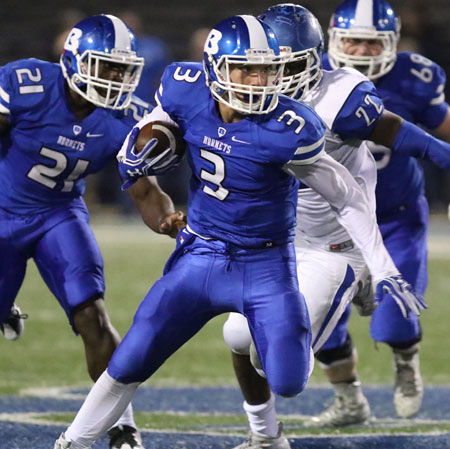 Reece Coates (3) looks for running room after picking up blocks from Cameron Coleman (21) and Chandler Davis (68). (Photo by Rick Nation)

It was a bounce-back win after Bryant’s 38-7 loss at North Little Rock, which snapped a four-game winning streak. The Hornets head into the post-season with five wins in their last six games.

It was a strong defensive effort for Bryant, limiting Conway to a net of 56 yards rushing, just 3 yards in the second half. The work of the defense was highlighted by a goal-line stand at the end of the first half that preserved a 7-0 lead as well as a pick-six by linebacker Antonio Todd, one of two interceptions for the Hornets. Safety Michael Jones had the other.

“I thought it was a pretty and ugly game,” said head coach Buck James. “It was great to win the game. I thought we bent a lot on defense and we kept having penalties and mistakes that kept us behind the sticks. It’s just frustrating.” 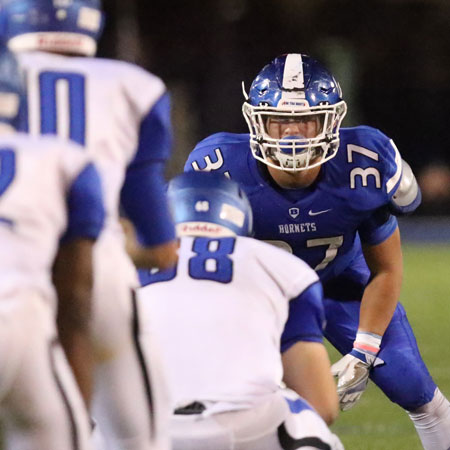 The Hornets were flagged 12 times for 120 yards, exactly twice as much on both stats than Conway.

“The defense — you know, when we focus and we play hard and our back’s against the wall, we do a good job,” James added. “Then we get out there and relax. We’re not good enough to go out there and lose our concentration, our disciplines and our focus on what we’ve got to do. We’ve got to play hard on every play. We can’t save ourselves for the next play or worry about what we did on the last play. We’ve got to be the kind of guy that wants to win on every play, without an excuse, without a hiccup.”

The coach admitted that if he’d been told after spring practice that the Hornets would go 7-3 this fall, he would’ve been “ecstatic.” The victory puts the senior class in line to set a new mark for wins by a class. The 2015 seniors were a part of 25 wins on the field (26, if you count a North Little Rock forfeit in 2013). The Class of 2016 has been a part of 25 now. 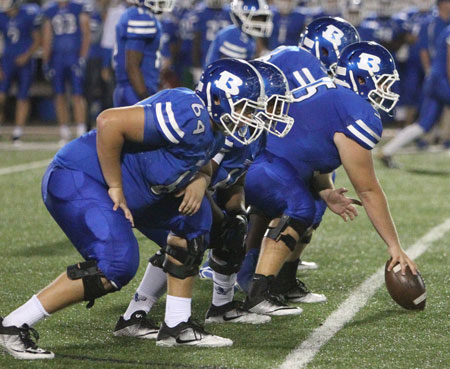 “We keep raising the bar and that’s what we want,” James said. “We want to get better and have the next group try to beat that record, then the next group. Eventually we get there. But we’re steadily chopping on the tree. We’re going to get there.

“But, also, you’ve got to tip your hat to Conway. Defensively, they’re not a bad football team. They’d won three of their last four games. They’ve done some good things with their team. So we beat a team that was hot, on a roll. We’ll take those kind of wins all year but we want to play clean.” 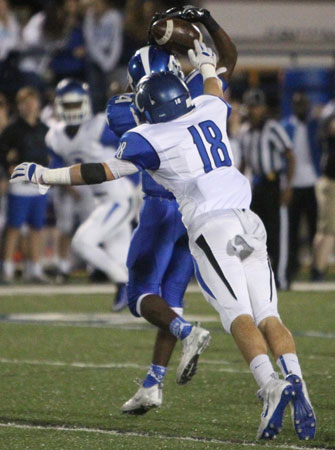 Brandon Murray (14) finds a way to haul in a pass despite the efforts of Conway’s Jackson Freeman (18). (Photo by Rick Nation)

Conway, with the help of Cabot’s one-point loss to undefeated North Little Rock, secured the No. 4 seed for State from the Central. They’ll get a first-round home game against Rogers, which defeated Springdale 38-21 on Friday to earn the No. 5 seed from the West.

The Hornets opened the scoring on Friday after forcing the Wampus Cats to punt. On the second snap for Bryant’s offense, sophomore quarterback Ren Hefley fired a pass deep down the middle that Brandon Murray hauled in on a contested play. He outran the secondary to the end zone for a 61-yard touchdown pass.

Hayden Ray added the extra point to make it 7-0.

Though it may have seemed at that point the Hornets might romp, that proved to be the only score until late in the third quarter.

Conway picked up a first down on its second possession but running back McCall Dail was dropped for a loss by Kajuan Robinson and Marvin Moody. A play later, Robinson batted a pass right back over the head of quarterback Parker Teague, forcing a punt.

Robinson, a sophomore who hadn’t played school football before this season, would add a pair of sacks late the game to frustrate Conway’s bid to rally. 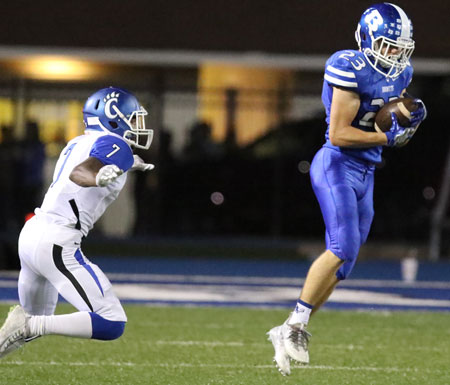 The Hornets suffered another penalty on their next possession, negating a 27-yard pass from Hefley to Murray.

In turn, Conway drove to the Bryant 13 and suffered its own holding penalty that negated a touchdown run by Kip Vanhoose. Todd stopped Vanhoose for a loss on the next play and, eventually, the Cats had to settle for a 44-yard field goal attempt. Cameron Tillery’s kick fell short.

Aided by a pass interference penalty and a defensive hold against the Hornets, the Wampus Cats threatened again as time dwindled in the first half. A third-down pass from Teague to H back Jack Pillow reached the 3. 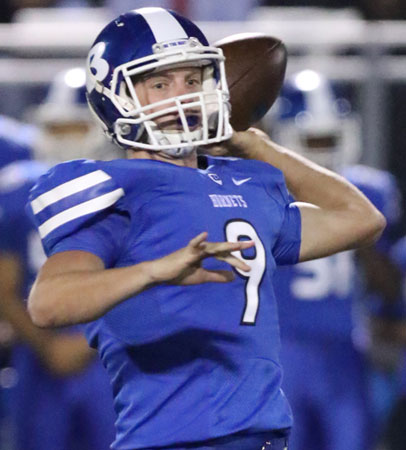 Senior Beaux Bonvillain completed 7 of 13 passes for 88 yards in the second half against Conway. (Photo by Rick Nation)

Senior Madre Dixon stopped Teague on the first play there, a loss of a yard. A second-down pass was caught by Pillow in the back of the end zone but he couldn’t get his feet down inbounds and it was incomplete.

On the next play, the Hornets were flagged for pass interference and the ball was moved up to the 2. On third down, Teague’s pass was broken up nicely by safety Cameron Vail.

With only seconds left, the Wampus Cats went for it on fourth down. Teague tried to sneak it in but the Hornets held. Though there was some confusion about what the down should’ve been, the officials wound up getting it right and Bryant took over at the 1.

“Our guys could’ve laid down,” James said. “It happens every Friday night, every Saturday and every Sunday. A team gets on the 1-yard line and the team just let’s them run in. For us to be able to do that (hold Conway out) says a lot about the stinginess of our defense.”

It kept the Hornets ahead at the break. 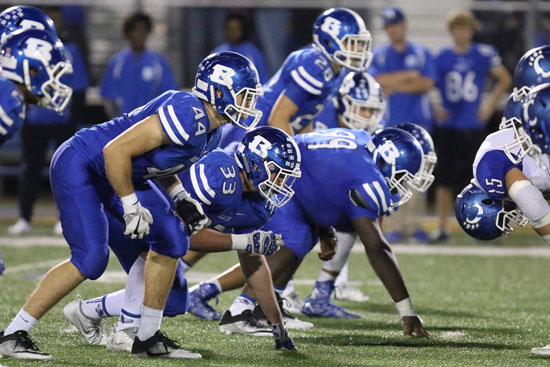 The teams traded punts to start the third quarter. Senior Beaux Bonvillain took over at quarterback on Bryant’s second series of the half. His 19-yard strike to Luke Curtis gave the Hornets a chance to add to the lead. Reece Coates, running the Wildcat, converted a fourth-down play with an 11-yard bolt and the Hornets eventually reached the Conway 11. The next two plays, however, lost yardage and Ray came on to try for a 38-yard field goal. But it was wide left, just the third miss in 14 attempts this season for the senior kicker.

Conway went three-and-out for the second time in the half and, this time, the Hornets cashed in. Bonvillain’s 28-yard aerial to Coates opened the march. Jeremiah Long followed with the team’s longest run of the night, gashing Conway for 24 yards to the 11.

Though a false-start penalty pushed them back, the Hornets wound up converting a third down when Bonvillain and Coates hooked up again for 11 yards to the 2. On a fourth-and-1 there, Cameron Coleman powered in for the TD.

Conway switched to sophomore quarterback Jovani Johnson on its next series. Johnson’s first pass came on second down. Todd flashed in front of the receiver at full speed and never slowed down after making the interception until he reached the end zone.

Ray’s PAT set the score at 21-0 with just over a minute left in the quarter.

But Ray had to save a touchdown on the ensuing kickoff, forcing Dail out of bounds after he had returned the kick 47 yards to the Bryant 45.

Moments later, however, the Hornets had forced the Cats into a fourth-and-7 at the 42. Johnson converted with a 14-yard pass to Joe Thomas. Two plays later, Johnson tossed to Dail for the Wampus Cats’ lone score with 10:22 left in the game.

A muffed kickoff and an illegal block in the back pinned the Hornets at their own 5 as the momentum began to swing to Conway. But behind the running of DeAmonte Terry and pass completions to Coleman for 8 and 12 yards to convert a pair of third-down situations, the Hornets worked the ball out to the 37.

A penalty knocked them out of rhythm, however, and they were forced to punt.

Conway got the ball back with 7:18 left. From their own 27, however, they got nowhere. A second-down run was stopped for a loss by Madre Dixon and Robinson.

A return punt gave Bryant possession at its own 40 with 6:21 left. The Hornets knocked a couple of minutes off the clock so when Ray came on to punt it back, the Wampus Cats were left with just 4:19 to try to score twice.

A 36-yard pass from Johnson to Marquise Pleasant gave them a chance as they converted a fourth down. But, on the next play, Robinson got his first sack. After linebacker Brooks Ellis stopped a swing pass to Dail for just 2 yards, Robinson came through with another sack on fourth down and the Hornets took over with 1:55 showing.

Runs by Coleman and Coates picked up a first down and Bonvillain took a knee on the last play of the game. 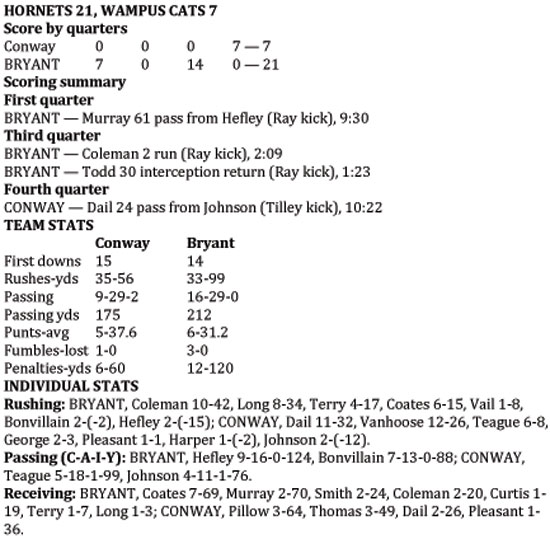