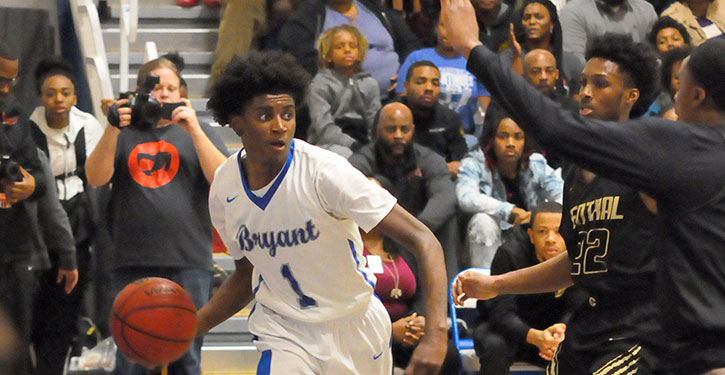 Sparked by a defensive effort that forced the Little Rock Central Tigers to labor for every shot they took, the Bryant Hornets put together a 10-0 run in the first half and a 15-2 blitz in the second half to forge a 59-45 win at the Hornets’ Nest on Friday night.

The Hornets, who led by as much as 18 with two minutes left in the game, improved to 11-4 overall and 2-1 in the 6A-Central Conference. Central, which came in 10-4 with a pair of tough league losses — in overtime against North Little Rock and on a last-second shot against Fort Smith Northside — was desperately seeking its first conference victory.

But Bryant, played one of its best games of the season with a full house on hand, in part, to honor the Class 7A State champion Hornets football team.

Traylon Payne finished with a game-high 20 points and Rodney Lambert had 13, 12 of which came in the second half to lead the Hornets. Catrell Wallace added 8 points and 10 rebounds while Arlon (A.J.) Jenkins picked up 7.

Rajhon McIntosh scored 12 off the bench to pace the Tigers. K.D. Arnett and A.J. Williams had 10 each.

“The defense was good tonight,” acknowledged Hornets head coach Mike Abrahamson. “The guys were really locked in defensively and finished the possessions with block-outs and rebounds.

“I thought we did a great job of taking away what they wanted to do, contesting the shot that they took, blocking out and then going and getting the ball,” he continued. “That’s a lot going on and it happens fast and it’s not easy. But our guys did a good job tonight.

“Another thing I thought our guys did a good job of, is stopping them in transition,” the coach added. “When we missed, we didn’t let them get in their running game. That’s just our guys really locking in.”

The Hornets only trailed briefly at 5-4 in the first three minutes of the game. Payne’s driving jumper put Bryant on top to stay. Off a steal, Payne drained his first 3 and, moments later, he drove from the right wing and hit a floater over a Central defender that had the Hornets up 11-5 all of a sudden.

The Tigers’ new head coach Brian Ross, late of Baptist Prep, called a timeout but it failed to stem the tide. The Tigers turned it over again and Padrick Martin was fouled going to the offensive glass.

Though he missed his free throws, Camren Hunter rebounded for Bryant, flicked a pass back outside to Payne, who buried his second triple.

Moments later, Arnett, the Tigers’ leading scorer, picked up his second foul and came out of the game. With :43.7 left, Khalen Robinson, still recovering from an ankle injury suffered before New Year’s, picked up 2 points on a goal-tending call against the Tigers, making it 16-5.

“He’s still not 100 percent but he was good enough to get out there and play and we appreciate him being a warrior tonight, to get in there and really fight to get back for us.

Jakaylyn Jackson ended a dry spell of nearly five minutes for Central with a free throw in the final seconds, making it a 10-point game at the break.

Central’s Jeremiah Jones traded baskets with Payne then the Tigers began to whittle on the advantage, eventually cutting it to 1, 21-10 in the final minute of the half. With :15 left, Wallace got free inside and scored to make it a 3-point game at the half.

The teams traded baskets early in the third quarter and, with 3:51 left in the period, the Hornets’ lead was just 31-29.

Jenkins popped his second 3 of the game to start Bryant’s game-breaking outburst. Lambert, who sat much of the first half with a couple of fouls, drove, scored and was fouled. When he completed the three-point play, the lead was 8.

A Central turnover led to a layup for Payne and the lead was back to double-digits.

Williams hit a 15-footer but Lambert, working the offensive glass, got to the free throw line and converted twice. After a Tigers’ timeout, Payne drove for a hoop to make it 43-31 going into the fourth quarter.

Another three-point play by Lambert off a sterling feed from Hunter increased the margin to 46-31 before Jones scored.

Robinson fed Wallace for a bucket inside then drove for a basket to extend the margin to 17 and forcing yet another Tigers timeout with 4:53 to play.

Central was unable to whittle the lead to less that 14 the rest of the way. The Tigers were 0 for 14 from beyond the 3-point arc before Jackson hit a triple in the final minute. The Hornets answered with a layup by Hunter off a sparkling dish from Lambert. McIntosh made the final basket.

“It was a team effort,” Abrahamson declared. “Treylon had a good game. Rodney got off to a little bit of a rough start but really settled in and handled the ball well for us and led us; withstood foul trouble and bounced back and played through all that, which I’m real proud of.

“Catrell was a force for us again tonight,” he added. “Camren was awesome, making passes, handling the ball, rebounding, whether he was working on the wing or out front or at the high post — just awesome.”

The Hornets travel to Fort Smith to take on the Southside Mavericks on Tuesday.

“I think we’re only progressing now,” Abrahamson concluded. “I’m sure at some point there might be a step backwards. I hope it doesn’t cost us but, tonight, what you saw was a product of good practices, trying to become a team, really locking into the process of how you go about your business and winning, to become winners and not just flash and pizzazz.”