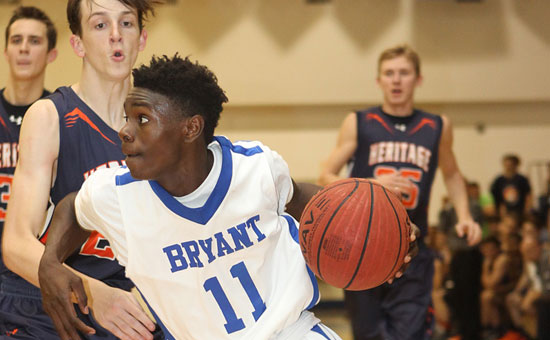 The Bryant Hornets suffered two losses to the Rogers Heritage War Eagles during the 2014-15 basketball season. The first was a 52-38 setback at Rogers right before Thanksgiving 2014. The second was a 52-48 disappointment, which ended Bryant’s season in the first round of the Class 7A State Tournament at Springdale Har-Ber.

On Tuesday, the War Eagles made a return trip to Bryant and the Hornets turned the tables with a 58-43 victory that included 65 fouls and 87 free throws between the teams. 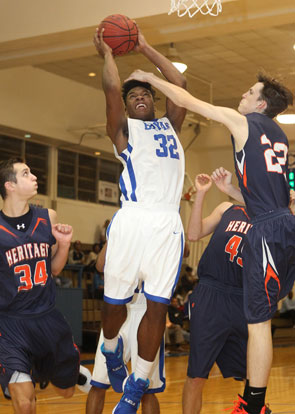 The win improved the Hornets to 2-0 on the season going into the OrthoArkansas/Central Arkansas Christian Invitational Tournament, which commences Thursday, Dec. 3, with a game against Central Conference rival Little Rock Catholic.

“We mentioned it a little bit but more was talked about just how good a team that is, how good a team I think they are,” said Bryant head coach Mike Abrahamson regarding Heritage. “It wasn’t so much revenge for last year. They have a lot of the same guys back. We have a lot of the same guys back but we’re still different teams. So, it was more about our preparation to play a good team and to try to do our best against somebody I really respect. I respect (Heritage) Coach (Tom) Olsen as a coach, the way they run their program and the team they have.”

War Eagles’ senior talented Lexus Hobbs proved to be a difference-maker in both losses last season. On Tuesday, Bryant senior Kevin Hunt was given the assignment to guard him.

“He was awesome,” Abrahamson said. “I challenged him to hold him under 10 and I think he had 6. Kevin was awesome, awesome, awesome guarding that kid because he’s explosive. He’s a big-time scorer. I think he’s really good. Watching him on film, he had a windmill dunk in a game. He dunked on somebody and got fouled. He’s just so hard to keep out of the lane and from around the rim.

“Kevin didn’t score a lot tonight,” the coach added. Hunt finished with 9 points, all in the fourth quarter. “We talk all the time about there are so many ways to impact a game. He was struggling shooting and scoring early in the game but he stuck to the plan defensively. Then at the end, he started scoring too. Kevin had a great game. He’s really showing signs of growing up as all of the kids are.”

Indeed Hobbs had 6 points and five rebounds. He got to the free throw line 13 times but only converted on four, which certainly added to his frustration. The War Eagles were paced by forward Seth Stanley with 115 points and six rebounds. 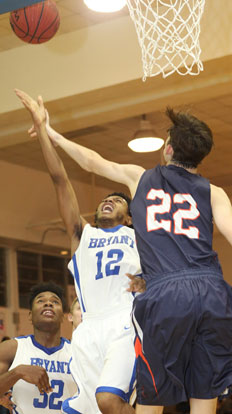 Bryant’s Christian Macintosh (12) puts a shot up after grabbing an offensive rebound. (Photo by Rick Nation)

Meanwhile, Romen Martin poured in 19 points to lead Bryant. Calvin Allen had 10 and Christian McIntosh pitched in with 8 off the bench to go with five offensive rebounds.

As for the fouls, the officials have been instructed (by whoever instruct officials) to tighten up their calls early in the season to establish a pattern. If the usual plan evolves, games will be much looser, particularly in conference play. Each team had three players foul out. It was Hobbs, Tony Casey and Ty Olsen for Heritage; Martin, Steen and Washington for Bryant.

The game was tied at 28 with 1:42 left in the third quarter but the Hornets put together an 18-1 spurt to build the game’s first double-digit lead. It came with 5:50 left in the game. The lead eventually ballooned to 20 points, 54-34.

“It’s good to expand the lead,” said Abrahamson. “That shows some growth. That’s not been the case (in the past). And it’s not just offense. On defense too, we tend to get a little bit conservative and loose. I challenged them to grow in that area, stick to the plan offensively, stick to the plan defensively, don’t let the moment be too big for you. And our kids responded.

“We still missed a lot of free throws,” he mentioned. “We still turned the ball over 17 times and we still have a lot of things we need to do better.”

Even with the tight calls and the foul trouble, it was a struggle to score for both teams in the first quarter. The War Eagles led 5-2 before Steen got a stickback and McIntosh, following his own miss, converted two free throws to give the Hornets a 6-5 lead going into the second quarter.

Martin then opened the second period with back-to- back 3’s, both off assists from Kaleb Turner. 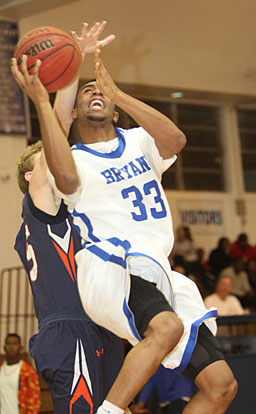 Romen Martin (33) fights his way to the rack. (Photo by Rick Nation)

The Hornets held the lead for the rest of the half. Free throws by Washington and Turner pushed the Bryant margin to 16-10. McIntosh scored off an offensive rebound and was fouled midway through the period, converting to make it 19-12. Calvin Allen and Rickie Allen converted at the line down the stretch and it was 22-15 going into the final seconds. Will Moss hit a 3 with :26 left in the half and it was 22-18.

Bryant went without a field goal in the third quarter but converted 10 of 14 from the line along the way. Heritage rallied behind 3-pointers from Marek Stanley and Seth Stanley then Hobbs converted a pair of free throws to put the War Eagles back on top 26-24.

But the lead didn’t last long. Steen converted a pair of free throws after snatching an offensive rebound. And when Martin followed his own miss, was fouled and converted twice, the Hornets were back on top 28-26.

Seth Stanley tied it but free throws by Martin and Calvin Allen had the Hornets up 32-28 going into the final period. Those free throws started Bryant’s game-breaking run. Washington converted once early in the final period and, after a Heritage turnover, Calvin Allen made a sweet pass between two defenders to Hunt on the baseline and the senior scored his first points of the game, making it 35-28.

A three-point play by Calvin Allen made it 38-28. Moss hit a free throw to provide the lone interruption of the Bryant blitz.

Martin followed it up with his third triple of the game. Washington scored off the offensive glass and, after Hobbs missed twice at the line, Washington went to the line and converted once. His second try was rebounded by Hunt, who scored to cap the primary push.

The War Eagles didn’t manage a field goal in the fourth quarter until Marcus Breedlove hit a jumper off a spin move with 4:14 left, cutting the Bryant lead to 59-34.

Marcus Breedlove drove in hopes of scoring and getting fouled but his wild shot failed to catch iron or backboard. Despite protests claiming Bryant had touched the ball on a block attempt, the Hornets were handed the ball.

In the melee, though, Hobbs was hit with a technical foul, which forced him to the sideline the rest of the game. Hunt hit the two free throws off the original foul then one of two on the technical. Bryant got the ball and, eventually, McIntosh scored again off the offensive boards.

That put the Hornets ahead 54-34 with 2:49 left in the game. With Moss dropping a 3, the War Eagles made a bid to rally but the closest they could get came late when Seth Stanley drove for a layup, setting the final score.

A big play for Bryant came when Washington couldn’t get a free throw to fall — both teams were well into the double bonus — and Calvin Allen rebounded and added a free throw to make it 56-38.

Free throws by Marek Stanley and Breedlove trimmed it to a 15-point margin before Hunt made a nice drive for a layup against the spread out War Eagles defense.

Another rout for Sox at 15U Babe Ruth State tourney