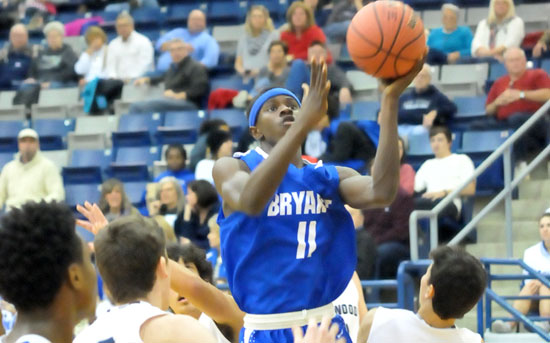 Hornets put clamps on Greenwood in second half 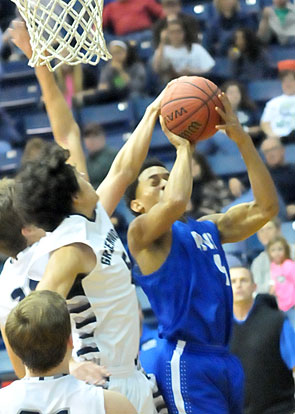 Wesley Peters muscles up a shot despite Greenwood’s defense. (Photo by Kevin Nagle)

GREENWOOD — The Bryant Hornets ratcheted up the defensive intensity and aggressiveness in the second half, turning to a half-court trap and held the Greenwood Bulldogs to just 13 points to help secure a 48-35 win in the 7A/6A-Central Conference opener for both teams Friday night at the handsome H.B. Stewart Bulldogs Arena.

The defense forced eight second-half turnovers but also rushed the Bulldogs into some quick shots. As a result, Greenwood went just 4 of 19 (21 percent) from the field after intermission.

Kevin Hunt led the Hornets with 19 points and seven rebounds. Lowell Washington added 8 points and a game-high 14 boards including seven on the offensive end. Ricky Allen added 6 points on a pair of first-half 3’s.

The game was close throughout the first half with neither team leading by more than 4. Greenwood connected on four of 11 from 3-point range to keep it close. The Bulldogs’ 6-6 Dustin Lunsford found the range three times from the corner.

“Greenwood had a good plan but we just kind of gutted this one out with our effort and just the persistence of pressure to get enough easy baskets, to make enough free throws,” said Hornets coach Mike Abrahamson. “We started putting pressure on their offense too. Our guys have a tendency, after the other team scores, to just walk it up, to be a little bit down about the other team scoring. I try to get them to move on to the next play. You put pressure on a team with your defense, which everybody knows. But what I want our kids to do is to also put pressure on them with our offense.” 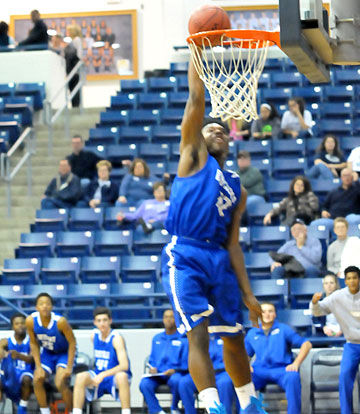 Bryant still held a 25-22 edge despite the fact that one of its leading scorers, Romen Martin, spent most of the half on the bench with two fouls. He did not score in the first half and, with more foul problems, wound up with just 3 in the game.

Marvin Moody scored inside off a nice drive and dish move by Calvin Allen to start the second half. Washington posted up for a bucket to extend the lead to 7. Drake Lee answered with a 3 for Greenwood but Hunt drove and was fouled as he scored. When he completed the 3-point play it was 32-25.

Grant Morgan hit a free throw to interrupt Bryant’s run. But a stickback by Martin and a drive to the rack by Antavious Lewis pushed the margin to double-digits for the first time, 36-26 with 3:57 left in the third.

“They shot the ball really well (in the first half),” he noted. “When they really spread us out, we did not help — first man away, first pass away. We let them break that first line of defense. So the guys on the corner had to help and they kicked it to the guy (Lunsford) wide open in the corner for a shot. And, to their credit, they made them. 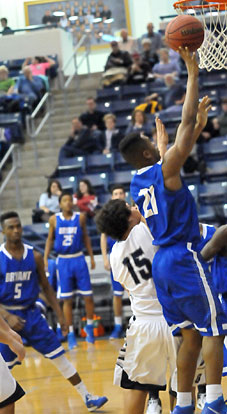 Romen Martin (21) goes up for a shot over Greenwood’s Grant Morgan (15) as teammate Antivirus Lewis follows up on the play. (Photo by Kevin Nagle)

“But the second half, we knew,” the coach related. “I just told the kids, if we maintain our pace, maintain our energy and we pick up the aggression on defense, that we might just wear them down. And we did enough. We did enough to win.”

With 3:44 left in the third quarter, Matt Ludwig tossed in Greenwood’s final successful 3-point try, trimming the margin to 7.

But Martin whipped a pass to Moody on the right side of the lane for a layup and Wesley Peters connected on a free throw after Moody had made a steal, pushing the margin back to 10.

Ryan Padilla drove for a basket for the Bulldogs but Wesley Peters got a shot to go from the short corner off a nice assist from Ketrick Wilson and it was 41-31 going into the fourth quarter.

The Hornets ran an alley-oop play for the first basket of the final period. Calvin Allen threw it up for Hunt who got a shot to go. That gave Bryant its largest lead up to that point at 12.

Greenwood could get no closer than 9 down the stretch but the Bulldogs went the final 7:15 without a field goal. They converted at the free throw line to keep it as close as it was.

A few missed chances at the line by Bryant gave them a chance but, in the final minute, Calvin Allen and Martin each hit a free throw and Washington put the punctuation on the victory with a dunk in the final seconds.

Abrahamson played 11 players in the game, more than usual. Eight of them scored. Between that and the pressure defense in the second half, the Bulldogs appeared to wear down in the end.

“That was part of that,” Abrahamson said of Greenwood’s poor shooting in the second half. “We need some more depth. I feel like we have some kids that are getting ready to deserve that chance. They got a chance tonight.

“We were playing some guys too many minutes,” he explained. “They become unproductive. Some time in the second half, there’s a period of bad production because they’re so tired. So I’m trying to keep everybody fresh and play more guys. And we can play a little more uptempo pace.”

Hunt scored Bryant’s first 9 points. Lunsford’s second 3 of the first quarter knotted the game at 9 but Ricky Allen drained a 3. Lee answered then, after a Bryant miss, Ludwig drilled a triple at the buzzer to give the Dogs a 14-12 edge going into the second period.

The Hornets put together a 9-0 run to start the quarter, taking the lead for good. Hunt drove for a layup then fed Ricky Allen for his second trey. Washington scored off the offensive boards and, after a Greenwood miss, Hunt fed Washington for a basket inside to make it 21-14.

The Bulldogs whittled the margin down to 23-22 but missed the front end on back-to-back bonus opportunities at the line. So when Hunt sank a pair from the line in the final minute, the Hornets had their 3-point halftime lead.

The trip to Greenwood was the first in a three-Friday canine tour for Bryant. Next Friday, they play the Pointers in Van Buren. On the Friday after that, the Hornets visit the Airedales in Alma’s palatial gym.

The Hornets continue league action on Tuesday when they host the Little Rock Catholic Rockets.