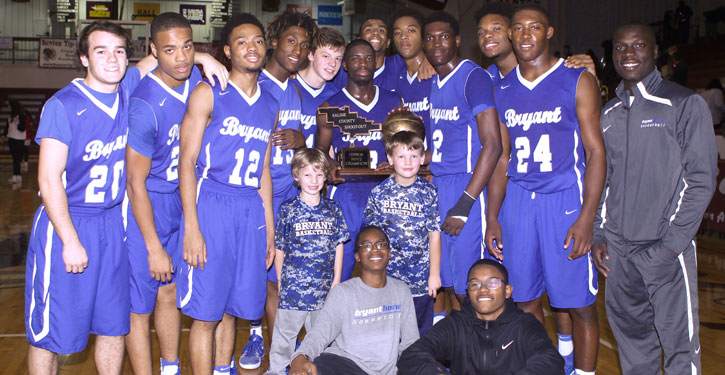 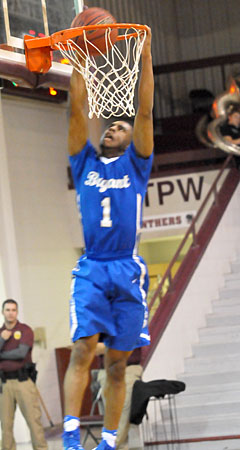 Romen Martin throws down one of his two dunks in Tuesday’s Saline County Shootout. (Photo by Kevin Nagle)

BENTON — Bryant Hornets head basketball coach Mike Abrahamson said he never mentioned it but he was certain he didn’t have to.

On Tuesday night in the annual Saline County Shootout, the seniors for the Bryant Hornets — Calvin Allen, Romen Martin, Marvin Moody, Braylen Steen, Kaleb Turner and Lowell Washington, all guys that have played so much good basketball — were playing the arch-rival Benton Panthers for the very last time.

“I don’t talk about stuff like that,” Abrahamson said. “I talk about, kind of in general, how we need to number our days and appreciate our time. But when it comes to Benton or anyone that we play, we try to respect every opponent and treat every opponent as close to the same as we can.

“They know that,” he assured. “I didn’t have to tell them that.”

The Hornets played like they knew it. A 14-0 run in the first quarter, spurred by intensive defense that made it tough for Benton to run its offense, the Hornets hustled to a convincing 64-46 victory. They earned the Shootout trophy for the second year in a row.

The Hornets shot 60 percent from the field (25 of 42) but take away a 1-for-11 night from 3-point range and it’s 77 percent. They were led in scoring by the two seniors that have been playing varsity since they were freshmen. Romen Martin had 18 points and Calvin Allen 17. Braylen Steen added 13 points and a team-high eight rebounds. Kaleb Turner scored 10, all on layups as he, like the rest of the Hornets attacked the basket much of the night. 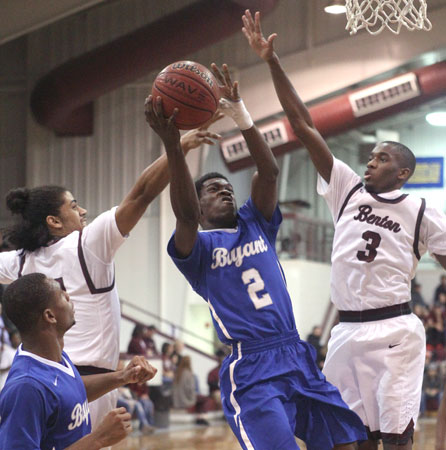 Kaleb Turner goes up for a shot between Benton’s Shaheed Talk (3) and Skylar Angelo. (Photo by Rick Nation)

But it was the defense that Abrahamson was really pleased with.

“Coming off Jammin’ For Jackets (tournament) where we had only one day of practice, yesterday, I didn’t think we defended consistently the way that we work on,” he said. “And, when you’re in a tournament, you can’t have practices to go fix it.

“I didn’t know if one day was going to be enough,” he added, “but it was built over time, over the summer and over the fall. The kids got back to their habits and I’m really proud of their effort tonight. Defense was key. Gosh, that first half, it just seemed like they were everywhere.”

The Hornets trailed 4-2 when the opening surge began. Allen drove for a layup then, off a Benton turnover, Turner got a layup. Steen made a steal for a layup to make it 8-4 and force the Panthers to call timeout. 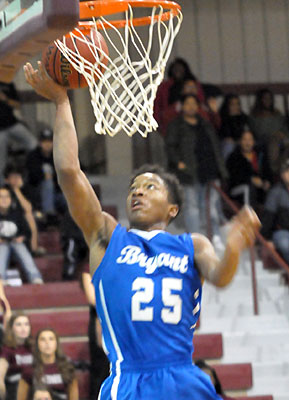 When play resumed, Allen drove and kicked it outside to Martin who drained the team’s lone 3 of the night.

Turner and Allen combined to force a turnover and Allen cashed it in with a three-point play at the other end. And, off a missed 3 by Benton’s Skyler Angelo, the Hornets pushed it up the floor and Turner hit a layup to make it 16-4.

“I don’t want to say I was surprised because I know the kids are capable of that,” Abrahamson said. “I don’t want to put them down by saying I’m surprised but we really respect Benton and, coming into this game, it really felt like they would be the hardest team to guard based on what they run and how they run it, that we’ve played so far. So to see that kind of effort defensively in the first half really set the tone for the entire game.”

Allen, the Hornets’ point guard, played nearly every minute of the game, providing penetration against the Panthers’ zone to score or to assist his teammates. He was also a key element in the Hornets’ taking advantage anytime Benton tried to extend its defense or to press. 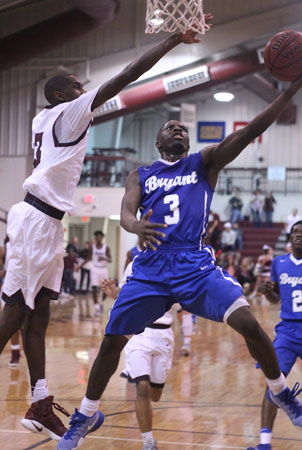 Calvin Allen avoids the defense with an off-hand shot. (Photo by Rick Nation)

“It’s hard to give him rest sometimes but we’re working on it,” Abrahamson said. “He really needs a break at times but, to his credit, he’s so tough he finds a way to regroup without a break. I don’t know how he does it but — it’s just toughness. He’s a tough kid and I love him to death. He’s awesome.”

When asked if he was tired after the game, Allen quipped, “I’m a machine. I don’t need rest.”

Of the defensive effort by the team, he added, “We just executed our game plan. Coach A always tells us to stay in the passing lanes and we just executed it. Everybody was locked in and on the same page and doing their job.”

Bryant led 16-6 at the first break and the defensive effort continued as they forced eight more turnovers in the second quarter and expanded the margin to 29-14 at the half.

Jai Peters hit a 15-footer to start the period, part of his 21-point night. And the Panthers had a chance to cut into the 16-8 margin but Martin made a steal and slammed home a dunk to regain the momentum for Bryant. 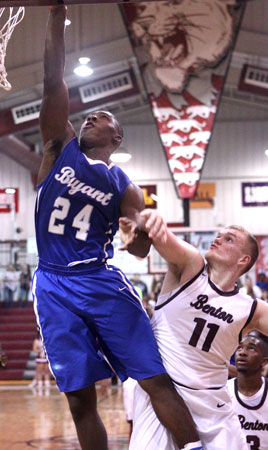 Marvin Moody (24) muscles up a shot in front of Benton’s Westin Riddick. (Photo by Rick Nation)

Moments later, Steen and Sam Chumley combined to force a Panthers turnover and it led to a basket by Martin, who hung in the air and got a shot to go despite being fouled. Though he missed the free throw, another turnover led to a layup for Turner off a feed from Rodney Lambert that made it 22-8.

On baskets by Peters, Shaheed Halk and Fred Harris, Benton got the margin back to 10 at 24-14 with 1:14 left in the half. But Steen scored off an assist by Turner then Allen and Martin combined on a theft that Allen cashed in. Moody made a steal and, after giving the ball up, got it back from Allen and was fouled with :07.8 showing. He converted one of the free throws to make it a 15-point game at the half.

The advantage eventually ballooned to 18 in the third period. Martin nailed a 15-footer and Allen knocked down a pair of free throws to make it 38-20 at the 3:23 mark.

The teams traded points the rest of the quarter, which Steen punctuated with a 14-foot jumper to make it 42-24.

Things fired up in the fourth quarter. Benton nearly doubled its score but the Hornets matched their 22 points in the quarter to maintain the upper hand. 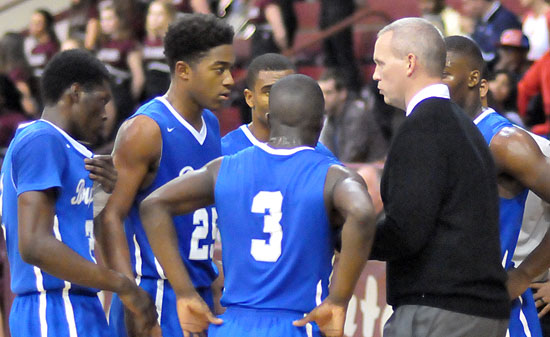 Head coach Mike Abrahamson talks to the Hornets during a timeout. (Photo by Kevin Nagle)

The Panthers got it down to a 12-point lead with 2:33 left in the game but failed the score the rest of the way. Steen added a pair of free throws, Martin flushed another dunk and Allen got free for a layup with Steen getting the assist.

Now 7-1 on the season, the Hornets will get a couple of days to practice before playing in an event in Conway that features 11 highly-regarded teams from around the state. On Friday, Bryant takes on Sprindale Har-Ber at 7 p.m. Saturday, the Hornets face Fayetteville at 12:30 p.m.