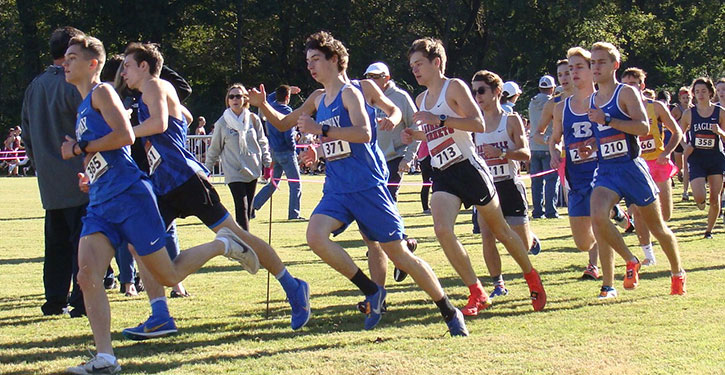 Calling it “our best team performance of the season,” Bryant Hornets head cross country coach Steve Oury praised the effort of his team for their work in Saturday’s annual Danny Westbrook Invitational at Bishop Park in Saturday.

The Hornets’ varsity finished with just 57 points, second only to a 27-point performance by Conway, which finished with three of the top four runners and all five of their scoring runners in the top 11.

“We only had a 45-second gap from our first to fifth runner, and we had several boys set big personal records,” Oury noted. “Christian Brack had never broken 18 minutes before today, and he almost got under 17 minutes.

“Hats off to Conway for running a very good race,” he added. “Their front runners ran really well, and we just couldn’t match up with them at the front of the pack. I think we have better depth than Conway, but their top five are running really well.”

On a 3200-meter course, the Bryant Junior High boys won with 27 points to defeat Conway (58) atop the field including runners from 12 schools. Russellville was third with 100. Little Rock Catholic and Hot Springs Lakeside tied for fourth with 142.

The Junior Hornets finished with all five runners in the top eighth and three more in the top 20.

“George Terry and Brady Bingaman did a great job leading the team,” said Bryant Junior High coach Brooke Meister. “We have been having a great season and the boys are getting stronger every race. They make me extremely proud and I look forward to every race.”

Said Oury, “I would like to thank all of the parents who volunteered their time to make this meet a success. We can’t pull this off without their help.”

Next Saturday, Bryant gets a chance to run on the Oaklawn Park course that will be the site of the Class 6A State meet. The Lake Hamilton Invitational will be held there. The State meet Is Nov. 9.