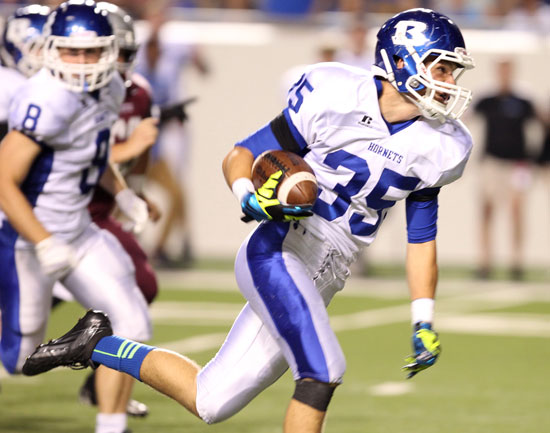 LITTLE ROCK — With his team’s confidence shaken a little bit by the 21-0 second-half blitz that Little Rock Catholic hit them with last week, which turned a 19-10 lead into a 37-19 loss, and with the high-flying Benton Panthers coming into the game off consecutive wins, Bryant Hornets head coach Paul Calley insisted that his team had to get off to a fast start in the 14th annual Salt Bowl at War Memorial Stadium Friday night. 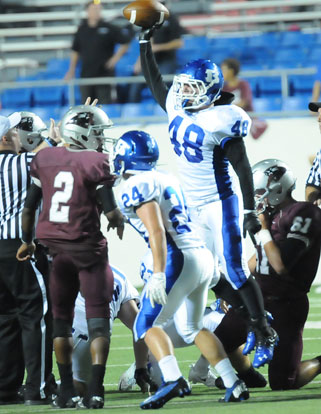 It could hardly have been faster.

Before the Panthers had snapped the ball on offense, the Hornets had a 14-0 lead. And, four plays into Benton’s first possession, it was suddenly 21-0 with 5:03 still to play in the first quarter.

“I thought we had to do that,” stated Calley. “The way it turned out, it’s a good thing we did. I’m just glad we brought the trophy back home. I’m glad it’s over.”

Though the Panthers got it going offensively, Bryant’s defense forced five turnovers and the Hornets never led by less than that early 14-point advantage on the way to a 42-28 triumph before an announced crowd of 24,100.

It was the eighth year in a row the Hornets have hoisted the Salt Bowl trophy and the 12th time in the 14-year history of the event. (Benton still leads overall 24-16-1 since 1974.)

Bryant improved to 2-2 overall and 1-0 in the South Conference. Benton dropped to 2-2 and 0-1. The Hornets host defending conference champs Pine Bluff next Friday while Benton tries to bounce back at J.A. Fair in Little Rock.

The game was coming out party for Bryant’s junior quarterback Brandan Warner who completed 18 of 24 passes for 221 yards and three touchdowns. 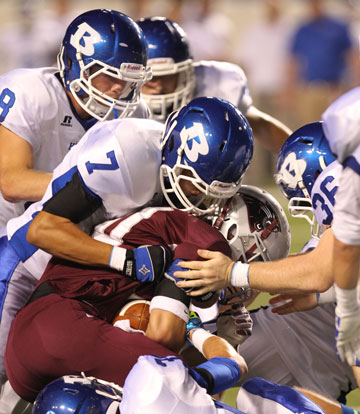 “He protected the ball, made plays when he had to and, hopefully, he’ll be back full strength this week,” Calley said.

Warner was banged up and gave way to Howard in the fourth quarter but then Howard was hit by leg cramps for the second time in a long game that was interrupted repeatedly by players cramping up especially in the second half after a 45-minute halftime.

It kept Bryant trainer Christa Finney and Benton trainer Michael McConnaughhay hopping. In fact, one of the highlights of the game came when Howard cramped up after a 12-yard run with just under four minutes left in the game. All too ready to get the game over with, Calley, rather than waiting for the cramp to be stretched out on the field, strode out to Howard, picked him up (despite a bad back) and carried him to the sideline.

Warner came back in and handed off to running back Kylon Boyle on five of the Hornets’ final six plays. 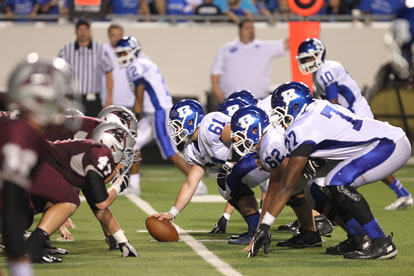 The lines for the Benton Panthers, left, and the Bryant Hornets get set to duel. (Photo by Rick Nation)

Boyle wound up with 65 yards rushing on 14 carries, second only to Brendan Young who picked up 78 yards on 17 totes with a touchdown.

Brushawn Hunter caught seven passes for 105 yards and two scores while Devonte Howard hauled in eight throws for 91 yards and a TD. Howard, running out the Wildcat offense, also scored on a 7-yard run.

For Benton, quarterback Tarek Beaugard, who accounted for nearly 700 yards of total offense the week before against Greenbrier, hit 26 of 44 passes for 290 yards and three touchdowns while also picking up 93 yards rushing with a TD sneak. 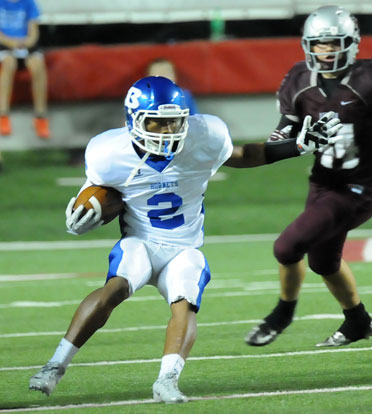 The two teams combined for almost 900 yards in offense.

The Hornets opened the game with a 70-yard touchdown drive in seven plays. Young burst for 25 yards to start it. Bryant reached the 15 but Howard was dropped for a loss by Benton’s Tim Dezort. On fourth down, however, Warner tossed to Hunter, show sprinted his way into the end zone.

On the ensuing kickoff, Benton’s Ryan Rodriguez made a nice return but had the ball knocked loose. It rolled up the left sideline before Bryant’s Davis Nossaman made a sliding recovery on his way out of bounds.

Despite the disapproval of the Panthers’ fans, the Hornets were awarded the ball and, seven plays later, Young powered in from the 1 on a fourth-down snap. Warner had completions of 11 yards to Howard and 8 yards to Young to help set up the score.

With 6:03 left in the opening quarter, Benton’s offense finally got on the field. A 10-yard connection from Beaugard to Davis picked up a first down but, on the next snap, Johnson jumped the route, made the interception, broke a couple of tackles and sprinted for the Hornets’ third touchdown. 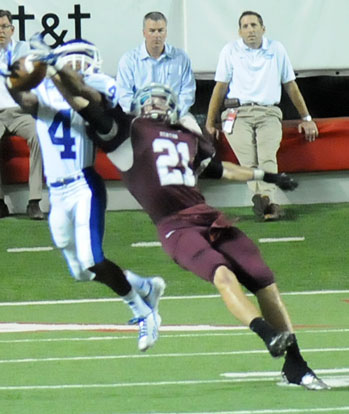 The teams traded punts before Benton put together a 14-play, 64-yard scoring drive. Beaugard completed six passes in a row to get it to the Bryant 9. After a pair of incomplete tosses, a 4-yard throw to Dyer set up the quarterback sneak that got the Panthers on the board with 11:24 left in the half.

It didn’t take long for the Hornets to answer. Warner threw a tunnel screen to Hunter that he broke for 24 yards. A dump pass to Wesley Akers opened up for an 18-yard play and, after Young pounded out a 9-yard run, Warner tossed a 13-yard touchdown pass to Howard. Denker kicked it to 28-7.

Beaugard broke a 32-yard run on Benton’s next snap, reaching midfield. Two plays later, however, Bryant defensive end Austin May stripped the ball from the Panthers’ quarterback and the Hornets’ Conner Chapdelaine recovered at the 49.

A 13-yard throw to Howard set up the touchdown play, a throw to Hunter that he broke for a 38-yard touchdown and a whopping 35-7 lead.

This time, the Panthers responded with an 80-yard drive in seven plays. All seven snaps were passes with Beaugard completing five including the 20-yard touchdown toss to Sam Baker with 6:28 left in the half. 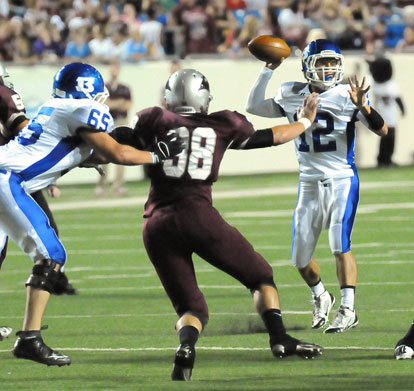 Still up 35-14, the Hornets drove to the Benton 5 but a trick play, a tackle eligible pass to Cameron Davis failed to surprise Benton’s Dylan Murphy, forced the Hornets to turn the ball over on downs.

The Panthers subsequently had to punt it away but a short kick put the Hornets 28 yards away from more points. Again, however, Bryant drove inside the 10. On a fourth-and-2 at the 8 with less than a minute to play, Young was piled up short of the first down and the goal line, leaving it 35-14 at the half.

The Hornets had to hope that leaving possibly 14 more points on the field wouldn’t come back to haunt them.

“(Benton) took momentum into halftime,” Calley acknowledged. “They stopped us twice on downs when we could’ve put the game away. We didn’t and we let them hang around. 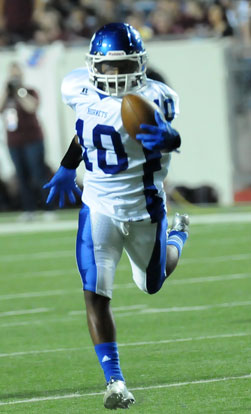 “But that’s the only disappointing part,” he asserted. “We’re proud of the kids. They fought their guts out, played hard to the end.”

Benton turned to the ground game to start the second half and, though the Panthers still needed a 9-yard toss from Beaugard to Davis to keep the drive alive, they marched to the 48. On the next play, however, Beaugard and Dyer missed connections on the handoff. The resulting fumble was recovered by Bryant’s Noah Flores.

A holding penalty sabotaged the Hornets’ possession so Bryce Denker came on to punt and unleashed one that took a series roll that favored Bryant. The ball was downed by Drew Tipton inside the 1.

To their credit the Panthers surged to the Bryant 39. After a 19-yard keeper by Beaugard got them there, a long pass down the left side was picked off by Hornets cornerback Mark Nelson.

Bryant was forced to punt and, this time, the Panthers finished off their drive with an 11-yard strike from Beaugard to Davis with :51 left in the third quarter. It trimmed the lead to 35-21.

The Hornets didn’t rest on their laurels put together a long 12-page time-consuming drive capped by Howard’s 7-yard run. Warner completed four passes on the sojourn and a pass interference penalty on a pass that looked like Howard would catch in stride on his way to the end zone.

It merely delayed the payoff.

Trailing 42-21, the Panthers dashed down the field as Beaugard hit 5 of 6 passes including a 50-yard completion to Davis that set up the 11-yard touchdown connection between the two.

The Panthers had two more possessions after that but a fumble, which Bryant’s Tanner Rich recovered, ended the first series. The second series ended when Nossaman knocked down a fourth-down pass with just over two minutes left.