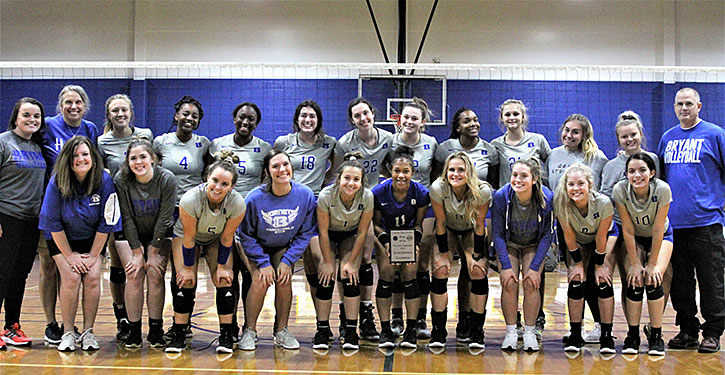 HOT SPRINGS — If the Bryant Lady Hornets needed a little shot of confidence, they earned it for themselves on Saturday when they won the Silver Division of the Hot Springs Lakeside tournament.

In the division finals, they fell behind by losing the first set to Lake Hamilton, 19-25. But they roared back to dominate the second set, 25-10, then, in a white knuckler, they pulled off the victory with a 17-15 win in the third set.

In the final, Madelyn Hoskins and Sammie Jo Ferguson each had six kills. Ella Reynolds added five to go with two solo blocks. Truli Bates had a kill and three solo blocks.

At the service line, Bryant had four aces, two by Olivia German and one each for Reynolds and Alyssa Hernandez.

In the win over Shiloh, Hoskins had six kills and Bates five. Bates, Ferguson and Cassidy Land added a block apiece with Reynolds getting two to go with four service aces. Jackson had two aces and Hernandez one.

In addition, Hernandez had 18 assists and Jackson came up with 16 digs.

Hernandez accounted for 12 assists and Jackson had 12 digs. Sam Still, Reynolds and Hoskins each had an ace.

Hernandez came up with 21 assists while Jackson had 12 digs.

The Lady Hornets served up eight aces. Jackson had two while German, Still, Thompson, Reynolds, Hernandez and Hoskins had one each.

Ferguson came up with three solo blocks and McCallister had one.

In service, Reynolds finished with three aces. Jackson and German had two each.

The Lady Hornets return to 6A-Central Conference play at home on Tuesday against Fort Smith Northside, as they begin the second half of the league round robin.