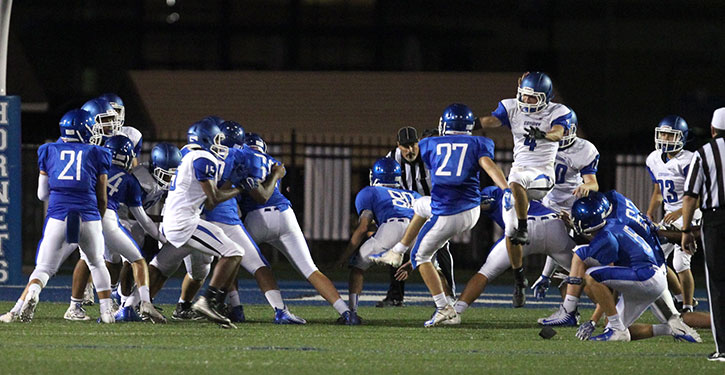 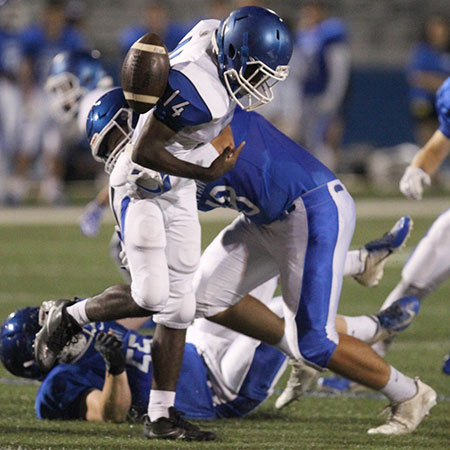 Bouncing back from a disappointing loss at North Little Rock last week, the Bryant Hornets freshman team scored on its first four possessions to build a 31-0 lead over the Conway Blue Wampus Cats on Thursday night on the way to a 31-6 win at Bryant Stadium.

Bryant head coach Kenny Horn was working in his reserves before the first half was over. And they played all of the second half except for two plays, which came after the Cats punted Bryant back to its 1 early in the fourth quarter.

The Hornets ate up the final 6:03 of the game, driving from the 1 to the Conway Blue 2 before back-up quarterback Braxton Prather took a knee at the end.

Bryant piled up 226 yards rushing and 108 passing. Fabian Torres rushed for 130 yards on just six carries with a touchdown. Quarterback Carson Burnett added 44 yards on the ground with two touchdowns plus 100 in the air including a 65-yard TD toss to Andrew Stueve. 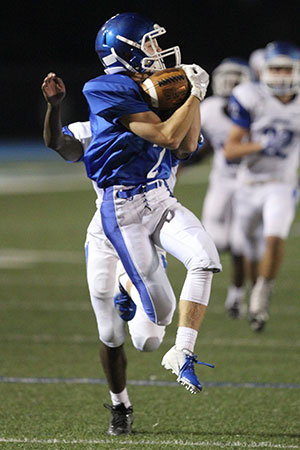 Lawson Speer hauls down a pass from Carson Burnett. (Photo by Rick Nation)

The Hornets improved to 3-2 overall and 2-2 in the Central Arkansas Junior High Conference going into next Thursday’s home game against Little Rock Catholic.

“We played well tonight,” said Horn. “We executed the game plan. We’ve got to clean a few things up, penalty-wise — just dumb stuff. But, for the most part, good stuff.

Burnett put the first points on the board on the fourth snap of the game, lacing his way 26 yards for the touchdown. Torres ran in the conversion.

Conway Blue picked up a first down thanks to a fourth-down holding penalty against the Hornets. But the drive stalled. Twice cornerback Logan White broke up deep passes from the Cats’ Logan French to West Boudreaux on the possession.

The Hornets got the ball back at their own 23 after a punt. A 42-yard bolt by Torres got them into Conway Blue territory. A play later, he scored from 24 yards out then added a run for the conversion to make it 16-0 with 2:47 still to play in the opening quarter. 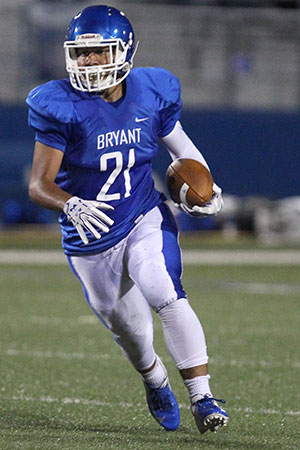 The Cats got the ball at their own 35 after the kickoff went out of bounds but they went backward from there. First, a holding penalty pushed them back then running back Jostin Brown fumbled and had to scramble to retain possession. Turner Seelinger hauled him down at the 11.

On the next snap, Brown was stuffed by middle linebacker Brandon Jones at the 10. That had Conway Blue in a third-and-35 hole. On a safety blitz, Blake Everett sacked French at the 2, forcing a punt.

The kick was nearly blocked and still only made it out to the 27. Though the Hornets were penalized back to the 42, on the first play, Burnett fired a pass to Lawson Speer on a post route that got the Hornets to the 7. A play later, Burnett kept on a 1-yard scoring run on the first snap of the second quarter.

The Wampus Cats managed to barely get into Bryant territory on the next series, thanks to a third-down run by Brown that picked up a first down at the Bryant 49. A play later, Brown was cut down for a loss by Jason Shiflett and Turner Seelinger.

After a penalty made it third-and-18 at the Conway Blue 43, Shifflett combined with Will Diggins to bring down Brown for a 5-yard loss. 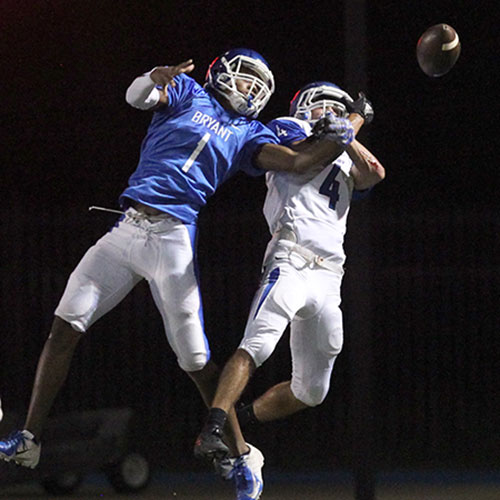 Punted back to their own 35, the Hornets offense returned to the field and scored on one play. Andrew Stueve got behind the Conway Blue defense and Burnett hit him in stride for a 65-yard touchdown strike that, with Stueve’s extra point kick, made it 31-0.

Conway Blue’s subsequent possession began with yet another loss when Gavin Burton stopped Will Vint. The Cats wound up going three-and-out but, on the return of their punt, the ball came loose, and Conway Blue recovered at the Bryant 35.

French found Boudreaux for a 21-yard completion and, eventually, the duo hooked upon a 20-yard touchdown pass with just over 30 seconds left in the half.

Diggins foiled the try for a two-point conversion.

Conway Blue made a bid to score in the second half, droving from its own 42 to the Bryant 2 when a third-and-goal play was stuffed by a Bryant surge led by Luka Pacheco. A fourth-down play was stopped short of the goal line by a charge led by J.J. Jackson and the Hornets took over at the 1.

The starters came back out and Torres reeled off runs of 26 and 27 yards to get to the Conway Blue 48. Though a holding penalty pushed the Hornets back, behind the offensive line and the hard running of Austin Williams, they reached the 2. 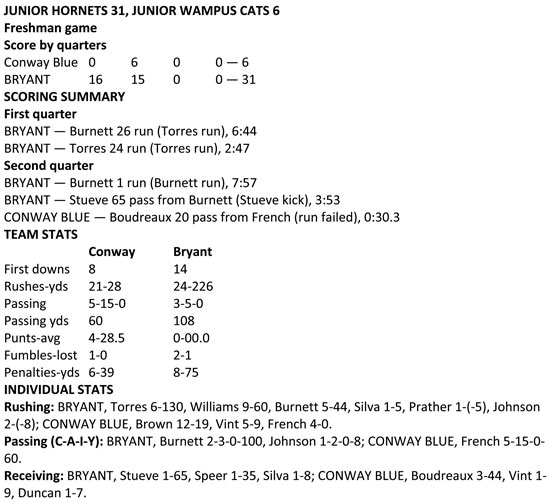