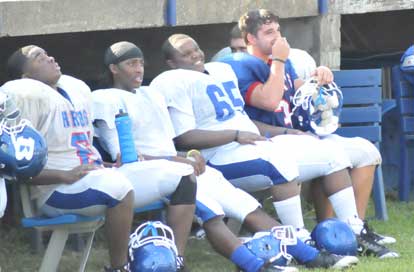 Asked what he liked about the Bryant Hornets’ practice and scrimmage on Friday, Aug. 6, defensive line coach Brad Stroud quipped, “I liked the fact that we had nice, big, fat, billowy cloud up above us.”

Yes, it was a little cooler morning as the Hornets worked through their second session in full pads on Friday. Of course, cool is a relative term these days. It didn’t break 100 degrees before the day was out but it still got over 90.[more]

“It was great today,” stated Hornets head coach Paul Calley. “Fatigue was not a factor. Oh, we got tired but it didn’t take away from what we were trying to do like it did (Thursday). It was a much welcomed cold front.” 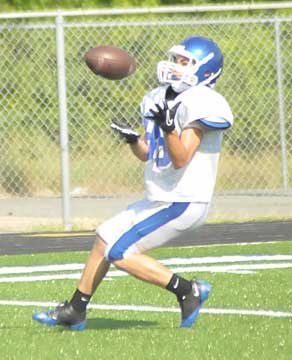 The way Calley and his staff work it, scrimmages are competitive. Even though both units — offense and defense — pretty much know what their counterparts do (they still try to catch each other off-guard), the idea is execution. If you can succeed when the other guy knows what you’re doing, how much better will you be when they don’t?

As Calley put it, “When you play against yourself as much as we do and you’re guys know you like the back of their hand, there’s not a whole lot you can pull on them. You have to execute it.

“It showed up in our team camp,” he added, recalling the summer camps the Hornets attended where they were matched up against other schools like Pine Bluff, White Hall and El Dorado. “The guys were looking around wide-eyed because they couldn’t believe how open some of pass routes were.”

“I think the offense is ahead of us right now,” Stroud stated. “Just like in the spring, they always seem to get a quick start then we finish strong. We’re kind of ‘on’ to what they’re trying to do to us, you know, and we get a little better at that. We’ll catch up. We’ve got all next week before school starts so that’ll help us.” 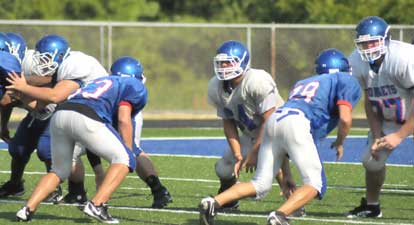 “We’ve been very specific on offense on what we’re working on, very vanilla,” said Calley, who confirmced what he had predicted on Thursday that the defense would get the better of the scrimmage on Friday. “The defense has seen it five days in a row and they added some stunts in today in the defensive line. It wasn’t a total breakdown on the offense’s part, it was one. But, if you have one breakdown on offense then you’re going to have problems, if it’s in the wrong area. Sometimes you can get away with it but, most of the time, you can’t. You have to have 11 people on the same page, executing.

“They got penetration today, in certain spots, and it’s usually the spot where we’re trying to run,” he continued. “Coach Griff, I think he stands in the huddle and listens to what play we’re calling and he stunts right into it. It always seemed to be right at the point of attack. We recognized it, we slowed it down but we didn’t stop it. We’ve got to stop it. That is major as far as offensive execution, doing what we do. 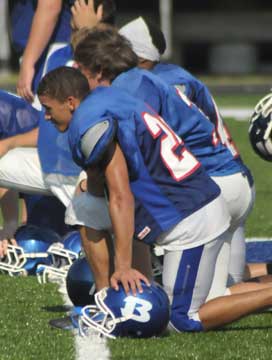 “It was our second day of pads and we came off the ball a little bit better,” Stroud said of the defense. “We’re still kind of ragged on some things but it just takes time. The things that we’ve worked on the last few days, they executed. But we’ve got a whole other set of things to do.”

“Looking at film, which is the best teaching tool that we have, the kids see those little things that we have to make adjustments on.

“Angles — angles of receivers running routes, blocking angles for our offensive linemen and receivers,” he continued. “Using our hands — we don’t use our hands well enough. And we’re playing too high. If you play too high and you can use your hands then sometimes you can get away with it.

“Our footwork’s been good. I think our footwork is well ahead of where we usually are at this point. Our quarterbacks, our offensive line and even our receivers have made strides the last couple of days,” Calley concluded.

The Hornets will resume their early morning practices on Monday. Next week will conclude with picture day on Saturday, Aug. 14, from 9 to 11 a.m., followed by the “Football for Mommies” from 11 a.m. to 1 p.m.

School begins in Bryant on Aug. 19 and the Hornets will scrimmage Pine Bluff at Hornets Stadium on Monday, Aug. 23.