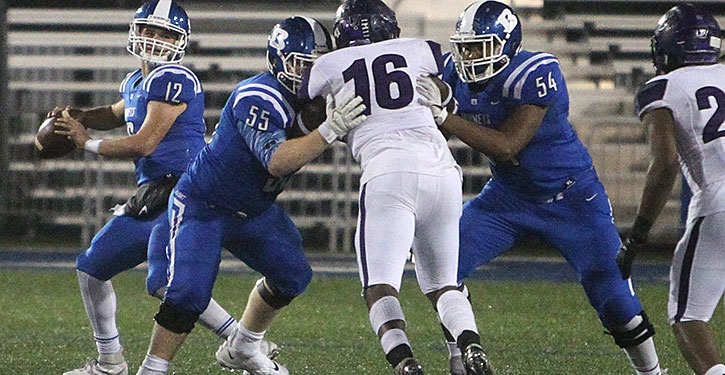 When the Bryant Hornets traveled to Fayetteville earlier this season, they came home with a 42-13 victory. It seemed like they breezed.

On Friday night, in the quarterfinals of the 7A playoffs, Fayetteville came to Bryant and absorbed a 42-14 loss. But it seemed like it was a much tougher game this time.

The difference was, in Fayetteville, the Hornets blew out to a 35-6 lead by halftime. On Friday, in Bryant, however, the game was tied 7-7 at the half.

And it was 14-14 midway through the third period.

But Bryant found its rhythm at that point. Increasing the tempo a little bit, the Hornets scored 28 unanswered points to win going away.

In the process, after a slow first half, junior quarterback Austin Ledbetter threw for 235 yards and two touchdowns. The former figure gave him, 3,017 on the season, unofficially, a new school record. The latter figure pushed his school record total for touchdown passes in a single season to 38.

Now 11-0 and still ranked number one in the state, the Hornets will host Bentonville West on the Friday after Thanksgiving as they advance to the State semifinals for the fourth consecutive season. Bentonville West ousted Conway, 31-21, Friday night to advance.

The Hornets are making a bid to make it back-to-back State titles.

Like Fayetteville, Bentonville West was an early victim of the Hornets, losing 38-0 at Bryant on Sept. 13.

It’s kind of amazing the expectations that this Hornets team has built up this season. With nine mercy-rule wins in 10 regular-season games, a little bit of adversity in the first half certainly caused folks to wonder what was wrong with Bryant.

Tied 7-7 at the break was so unlike the Hornets this season. And that’s kind of incredible to consider. They weren’t losing. They were even.

Of course, Bryant had a first-round bye and was idle the previous Friday night while Fayetteville was dismissing Cabot, 44-14.

Of course, winning by 28 points — no excuses should be necessary.

“I just want us to play cleaner,” James said.

But there was more to it than that. Things that were going on along the sideline that most fans wouldn’t have noticed.

“I want us to be better teammates on the sideline, pulling for one another instead of just being a part of it,” James asserted. “We’ve got some guys who are disappointed they don’t play, and they act like they don’t care. When somebody makes a mistake, they’re laughing and joking. They think it’s funny. That’s not what having fun is about. So, we’ve got to grow up a lot.

“But I’m proud of the way we came back and competed in the second half,” he said. “We rolled our sleeves up and played good. The defense played good. (In the first half), we just looked like the Keystone Cops out there, trying to get lined up against what they were doing.”

Still, Fayetteville’s lone offensive touchdown came after a fluke play on a punt. The Hornets had forced a three-and-out on the Bulldogs’ first possession. Quinn McClain, their quarterback, stepped back to punt and, despite a high snap, got the kick away. But it was short. Return man Jake Meaders tried to warn his teammates to get away from the ball but it took a weird hop and ricocheted off Kyle Knox, who was trying to set up to block for Meaders’ return.

Fayetteville pounced on the ball and their sideline went crazy. They had a shot to take a lead on the mighty Hornets. And that’s just what they did. The Hornets’ defense seemed to just be getting on the field when McClain fired a pass over the middle to his top receiver Connor Flannigan that broke for 39 yards and a TD.

That was actually the only score the Hornets’ defense gave up on the night.

But timing seemed to be a little off for the Bryant offense. Ledbetter, as consistently on target this season as any high school quarterback you can imagine, missed some throws and just didn’t seem to be locked in right away.

Late in the first quarter, Fayetteville put together a drive from its own 31 to the Bryant 19. The big play was a 24-yard connection from McClain to Flannigan. But, on the next play, McClain swung a pass to his tight end, Cooper Peters, and Bryant safety Tamaurion Wilson charged up and cut him down for a loss of 2.

Moments later, the Bulldogs faced a fourth-and-5 at the 19. McClain’s pass fell incomplete and Bryant had turned back the threat.

But the first of Taveon Williamson’s two interceptions in the game occurred. A return to the Bryant 31 had the Dogs back in scoring range.

A speed sweep to Flannigan reached the 21 but that’s where the defense stepped up. On a third-and-10 at the 21, defensive end Kyle Green sacked McClain at the 25. A fourth-down pass fell incomplete and the Hornets took over on downs again.

This time, from their own 25, they put together a scoring drive to tie the game. The drive was sparked by tough running from Ahmad Adams and Tanner Anderson. Ledbetter completed two passes including a swing toss to Anderson out of the backfield. A completion to Hayden Schrader for 8 yards got the ball to the 36. From there, Anderson, who started to run left but ran into a stuffed hole. He turned back to the right and turned in a scintillating 36-yard run for the TD.

Brock Funk, who was again perfect on PAT’s, tied the game 7-7 with his extra point with 2:42 left in the half.

With time running out in the half, Fayetteville reached the Hornets’ 47 on a 16-yard pass from McClain to Link Lindsey. On the next snap, however, Bryant’s Catrell Wallace, Tristan Sehika and Austin Bailey met at the quarterback for a three-yard sack.

Two plays later, Fayetteville called a timeout with :01 showing just to take a shot at scoring with the proverbial “Hail, Mary” pass that fell incomplete in the end zone.

Regarding the locker room at halftime, James said, “We got on to them about competing — we needed to compete better — and just being smarter, being where you’re supposed to be.

“That was the big complaint of the defensive staff, not being where they were supposed to be and not covering who they’re supposed to cover,” he related. “We were just running around trying to find who to cover. And we didn’t get where we were supposed to be some of the times. It gave them some big plays, allowed them to convert third downs.

“All our coaches did a great job of making adjustments,” the coach allowed. “We felt like we would win the game at halftime. It’s just that we had to play better.”

The Bulldogs got the ball to start the second half and drove to Bryant’s 46. But Wilson sacked McClain for a loss of 8 then LaQuav Brumfield broke up a pass. A third-down try fell incomplete and the defense got the ball back for Bryant’s offense.

The punt was partially blocked and only went 19 yards.

A tremendous, powerful run of 27 yards by Adams on Bryant’s first offensive play of the third quarter, stoked the Hornets. With Ledbetter completing short passes to Schrader and Herron, they drove inside the 20. On a third-and-11 from the 16, Ledbetter fired down the middle to Meaders for the TD.

And when the Bulldogs had to punt it back to Bryant, it seemed as though the Hornets were primed to take off and leave them behind.

But a play into the Hornets’ possession, Williamson stepped in front of an out-route, intercepted on the run and sprinted 42 yards for a touchdown that, with the extra point, tied the game back up 14-14 with 6:06 left.

“But that’s what you’re going to get if you’re the number one team,” he added. “People in the media saying we’re 28-point favorites or we’re going to mercy-rule them and all that stuff. We have to overcome some of that mentality.

“But, for the most part, our kids did a good job,” the coach said. “We found a way to compete and stay in there. We had some bad things happen, but we were able to rebound from it and play well. We had some adversity and we handled it. And we got better for it. I think, at the end of the day, that’s what we have to focus on.”

It didn’t stay tied for long. The Hornets came through with a chunk play to convert a third down. Joseph Young caught a 37-yard pass to the Fayetteville 30. Moments later, on another third down, Ledbetter stepped up in the pocket and took off, finishing a 24-yard scamper at the 3. From there, Adams powered in.

With Funk’s PAT at the 3:32 mark of the third quarter, the Hornets were ahead to stay.

But it was a little uncertain at that point. The Bulldogs drove to the Bryant 38. Knox came up to take down McClain for no gain and, two plays later, they had turned the ball back over to Bryant.

A play into the subsequent drive, Ledbetter fired a pass over the middle to Schrader who, on one of the most sparkling plays of the season, fought and cut to turn it into a 50-yard pass that set up a plunge into the end zone by Anderson. But he fumbled on the play. Tre’vun Herron, however, was there to fall on it for the touchdown.

Suddenly, Bryant had a two-score lead.

Fayetteville made a bid to stay in the game, driving to the Hornets’ 40 with the help of a pass interference penalty. On third down there, however, Bryant’s Brayden Godwin dropped McClain for a loss. A fourth-down pass was nearly intercepted by Wilson.

Still, the Hornets took over on downs and proceeded to quickly add to the margin. Meaders, running a post, caught his pass from Ledbetter in stride and went the distance, 57 yards, making it 35-14.

The Hornets put the finishing touches on the victory after Darrick Rose swiped a pass and returned it to the Bulldogs’ 14. Sophomore Xavier Foote covered that in two runs and, with 4:59 left in the game, the final score was on the board.

There was a delay, however, before the Hornets’ took over at the 14. On the return by Rose, Fayetteville’s big senior offensive tackle Jaylin Leapheart went down hard, twisting his body and hitting the ground in an awkward position.

He was eventually carted off the field by paramedics. That, along with Bryant’s subsequent touchdown sapped the Bulldogs. 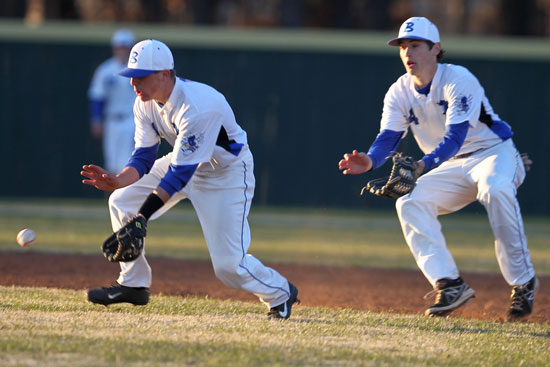