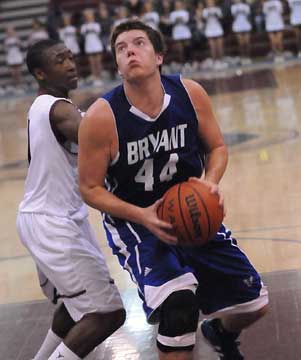 Think of all the players that have donned the Bryant Hornets’ basketball uniform between then and now, and realize that so many of them were frustrated in their desire to beat the rival Benton Panthers.

With a 10-2 run over the final 4:40 at Benton Arena, the Hornets brought an end to their long drought against the Panthers for their first victory of the season.

“I mentioned it today,” acknowledged Hornets second-year head coach Mike Abrahamson. “The Benton game is a great motivator in June, July, August. Just like the Bryant game for them is. When the team’s having a day when they might be a little sluggish, you can always kind of throw that out there and they’ll respond to it. But they knew it was 11 in a row and they wanted to change that.”

In fact, it was just the second Bryant win in the last 17 meetings between the rivals, dating back to 2003. 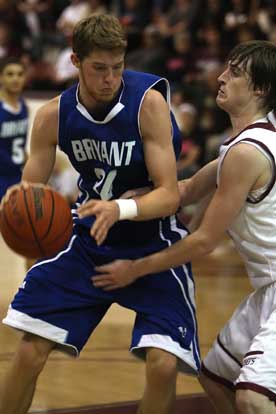 They’ll play again at Bryant on Dec. 16, exactly six years since that previous victory, hoping to sweep the Panthers in a season series for the first time since 2001-02.

Abrahamson hopes Tuesday’s win proves to be a landmark, a turning point for his program. It’s been a long time coming, he related.

“It took more than tonight,” said the coach. “It took since May 10, 2010, when I showed up. Not that it’s me — it’s the players. We’re trying to build a program that’s unique and special. I feel like this win came as a product of our work since May 10, 2010, when I got to Bryant. Everybody is buying in to what we’re doing. And even when things aren’t working out like last year when we had a lot of losses and this year starting off 0-1, they keep believing. They keep trying to get better. They keep coming to work hard every day, keeping the right attitude.

“Hopefully, it’s starting to pay off,” he asserted.

Eight of the nine Hornets that got into the game contributed to the scoring, led by Zach Cambron’s 12 points. Brantley Cozart added 8 points as did Quinton Motto who also gathered 15 rebounds. Jordan Griffin, who used to play at Benton, pitched in with 7. Marcus Wilson had 5 and so did sophomore C.J. Rainey, all of which came at key moments in the second half.

“Part of our plan was to get everybody to touch the ball, get more people involved and they did,” Abrahamson mentioned. 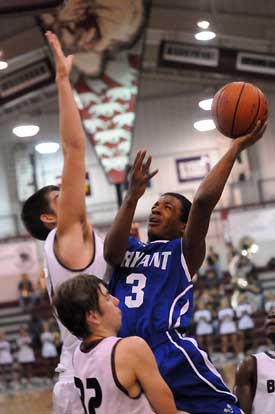 “The plan was to attack and be aggressive and get into the paint and get as many shots close to the basket as possible,” the coach explained. “And put pressure on them with our offense. A lot of times, people think you can only apply pressure when you’re on defense. But we wanted to put pressure on them when we were on offense, make a move, make them make decisions, make them talk, make them change sides of the floor, giving help, going to the ball — things like that. I think, eventually, it wore on them a little bit.”

It also got the Hornets to the free-throw line. They finished 11 of 14 from the line including 8 for 8 in the second half, while the Panthers who launched 21 3-pointers, only went 3 for 4 in the game.

Ricky Gipson led the Panthers with 16 points including three 3’s. Nate Griffin had 9 and Blake Bowlin 8. Benton’s inside trio of Zach Stuckey, (6-8) Graham Gardner and 6-6 Josh Bowling was held to just 6 points, all by Stuckey.

“On defense, we wanted to limit Graham Gardner’s touches,” Abrahamson said. “And we did. We were fortunate that he got into foul trouble. That helped us out a lot. That’s just one of those things that happen.”

Five of Benton’s six triples came in the first half, helping to create a 24-20 lead at the break. In the second half, the Panthers were 1 of 9 from beyond the arc. 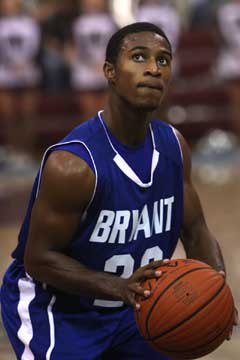 “We talked about that at halftime,” Abrahamson said. “They hit some shots and credit to them. But we were executing our game plan. We just had to believe in that game plan. And the players did. Eventually, (Benton) missed some shots they made in the first half. I hope that was part of our execution of the game plan but, if it wasn’t, we’ll take the luck.”

The Hornets started the second half with an 11-2 surge that was punctuated by Wilson’s 3-pointer which made it 31-26.

The Panthers whittled it to 31-30 and had a chance to take the lead after forcing a Bryant turnover with :23.4 in the period. But Bryant forced a turnover with :08.6 showing. Cozart forced a 3-point try as time was running out but left just enough for Rainey to grab a rebound and throw in a shot at the buzzer to make it 33-30.

Gipson hit a running jumper and followed with a layup to start the final period, putting his team ahead 34-30 and forcing the Hornets to call timeout.

When play resumed, the Panthers forced a turnover but Bowlin couldn’t get a 3 to go down and, at the other end, Cambron grabbed the carom off a teammate’s miss and scored to put the Hornets back on top with 6:19 left to play.

They would not trail again. 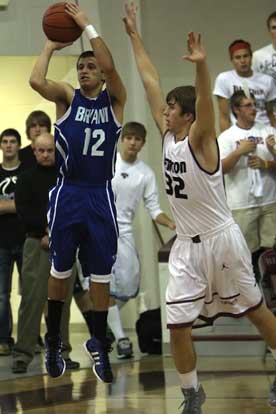 Gipson had a 3-point try rim out and Stuckey missed a follow. The Panthers got another chance after an illegal screen cost the Hornets possession only to have Bowlin miss a jumper.

That’s when Rainey stepped up again. Left alone on the left wing, he drained a 3 to make it a two-possession game. Gipson, however, connected on an answering trey and Benton called a timeout with 4:43 to go.

Gardner blocked a shot by Rainey and Nate Griffin chased down the loose ball, calling timeout as he flew out of bounds.

The teams traded turnovers and misses until Jordan Griffin drove the paint, drew the defense and dished to Cambron for a basket. And, after a Benton miss, Cozart scored off an inbounds play to make it 42-37 with 2:37 to go.

Nate Griffin drove for a bucket and a turnover gave the Panthers a chance to tie it with a 3. Cozart thwarted that with a steal but he couldn’t get his layup to fall. Given another chance, after a timeout, Benton never got a shot as Jordan Griffin and Motto combined on a steal.

The Hornets spread the floor and Benton had to use three fouls to get them in the bonus. Finally, with :41.4 left, Cozart was sent to the line with the initial one-and-one. He converted twice to make it 44-39.

Benton’s frustrations continued on the offensive end and Motto and Jordan Griffin added free throws to set the final score.

The game seesawed early. Bryant held a 9-8 lead at the end of the first period when Anthony Black fed Travis Royal for a basket.

Neither team led by more than 3 in the second quarter until Gipson added to a 19-18 lead with a pair of free throws and a 3-pointer to build the margin to 24-18.

A follow shot by Cambron set the halftime score.

To start the third quarter, Cambron and Stuckey traded baskets inside. Jordan Griffiin drove for a bucket then Wilson hit a pair of free throws to tie the game. Gipson misfired on a 3-point try and Cambron posted up for a bucket to give Bryant the lead. With 3:34 to go in the quarter, Wilson canned a troika and the Hornets had the 31-26 lead that set up the Benton rally.

The Hornets, now 1-1, are set to return to action in a tournament at Russellville on Dec. 8.