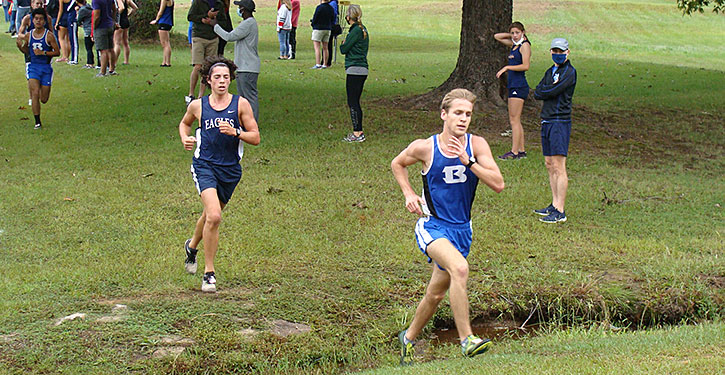 RUSSELLVILLE — Though the Bryant Hornets finished seventh in the field of 19 at the Cyclone Invitational cross country meet hosted by Russellville High School on Saturday, head coach Steve Oury said, “We actually ran pretty solid. The third through seventh place teams were tightly bunched together, and we were right there in them mix.”

It was the second week in a row that they led the way for the Hornets.

“I think we will see some other athletes working up closer to them in the weeks to come,” said Oury.

“It was definitely a step up in competition over last week,” Oury noted. “It was great to get back out to the course at the river after several years running on the Arkansas Tech campus. Lots of hills and ditches to deal with, which makes it a great challenge.”

The freshman Hornets finished with 66 points to Fayetteville’s 57. Fayetteville Ramay Junior High and the Cabot South tied for third with 118 points apiece.

Bryant’s Payton Brack and Brandon Avila finished second and third overall behind only Conway’s Max Henry, who finished in 10:51.4. Brack was right with him at the finish, clocking in at 10:52. Avila’s third-place time was 11:16.6.

“Coach Sontreka Johnson and Coach Nicole Bradbury are doing a great job with the junior high boys,” said Oury. “Payton Brack and Brandon Avila are running very well and may have a chance to help the senior high team later this season.”

The teams are scheduled to compete at the Wampus Cat Invitational in Conway next Saturday, Oct. 3, then host the annual Danny Westbrook Invitational at Bishop Park on Tuesday, Oct. 13.