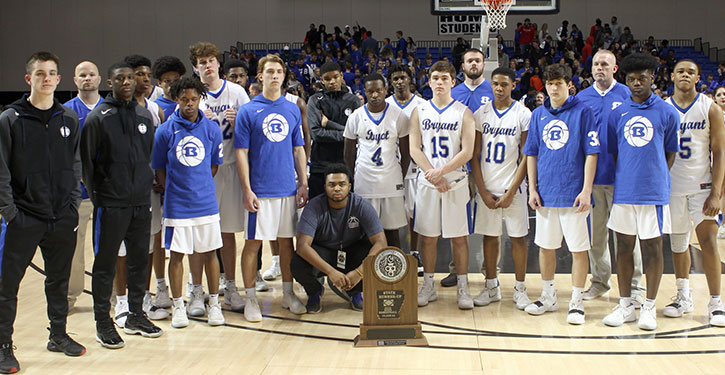 HOT SPRINGS — The first trip to the State finals in 36 years; the first conference championship in 30; 17 wins in a row, and 21 victories in 22 games — by all accounts, a remarkable season.

Yet, the Bryant Hornets aren’t thinking about that now.

Right now, it’s hard to think of anything but the bitter taste of defeat, a sting they only had to contemplate five times this season and, with the 44-41 loss to Fort Smith Northside in the Class 6A State tournament finals on Friday, for the first time in 18 games.

It is the second State title for Northside’s Grizzlies in three years, all three of which ended in the championship game. In 2017, they were led by Isaiah Joe. In 2019, they were led by 6-10 junior center Jaylin Williams who scored 20 points and hauled down 16 rebounds.

In four games against the Grizzlies this season, it was the first time Williams had actually been able to do that much. Bryant’s 6-7 junior Catrell Wallace, with help-side from his teammates, had defended the Grizzlies’ big man as well as anybody. This time, Wallace got into foul trouble and 6-3 Rodney Lambert, the Hornets’ only senior starter, had to try to slow down Williams.

But it was Northside senior guard Javion Releford, who hadn’t hit a shot from the floor all night, who put a dagger in the Hornets’ hearts. After the Hornets had clawed back from as much as an 11-point deficit — 10 early in the fourth quarter — to pull even 39-39 with 1:49 left in the game, Releford hit a stone-cold 3-pointer. And, later, Releford padded a 42-41 lead with a pair of free throws with :08.5 left to make it a 3-point lead.

Bryant head coach Mike Abrahamson called a timeout to set up a play. Northside defended rigorously, and Lambert had to fire a 25-foot off-balance 3-pointer at the buzzer — a hope that was not fulfilled.

“It didn’t really work out,” the coach said of the plan he’d designed during the timeout. “We wanted to use Khalen (Robinson) as a decoy. We knew they weren’t going to let him get it. And roll Treylon (Payne) over to Khalen’s side on the left, get it back to Treylon for the 3. He’s our best 3-point shooter. We didn’t really go far enough over to the left to really sell that out and Treylon wasn’t open anyway.”

Robinson and sophomore Camren Hunter each finished with 11 points for Bryant. Lambert had 9, Payne 7.

“I congratulate Northside,” said Abrahamson. “They played a great game. They earned it.

“We fought to the end,” he added. “This is our lowest point total of the year. It looks like they did a good job of limiting who most people consider our best player in Robinson. And their best player, Williams had a great game.

“We played them four times this year and went 2-2 against them,” the coach noted. “We average 63 points a game and, against them, we’ve scored 50, 42, 46 and, today, 41. Their size poses a huge problem for us and, obviously, everyone else. When they got it together defensively here at the end of the year — that starts with Coach (Eric) Burnett and Williams, who’s doing more that he did earlier in the year. He’s raised his level of play and he’s really carrying that team. The other guys have been doing their part too, but Williams has been phenomenal in the State tournament.”

He was named the MVP.

“We can’t score inside and where they’ve gotten better is, you can’t hardly turn them over,” Abrahamson explained. “We did some, but they really handle that well. Williams can do it all. We haven’t really seen anybody that can deal with Williams.”

Asked about the effect of Wallace’s foul trouble, the coach said, “That was tough to deal with but, you know, they’re just a really good team. All year long, I thought they were one of the best in the state. And they played like it at times and, at times, for some reason they didn’t. But they really got it together here in March. Give them credit with that.”

The Hornets forced 17 turnovers including several to fuel their fourth-quarter rally. But they were out-rebounded 29-23.

Bryant struggled early, falling behind 9-0. That and Jermualle Norwood’s half-court 3 at the buzzer to end the first half, wound up make all the difference.

Against the Northside zone, the Hornets missed their first five shots from the field before Payne broke the ice with just 2:45 left in the first quarter.

Asked if his team was a little nervous, Abrahamson said, “Maybe. It pains me to say that but maybe. We had some times where we didn’t look like ourselves. Our team’s been so good all year at following the plan and today we had some moments where we didn’t.

“Now, we still only gave up 44 but I thought early we were standing around on offense,” he added. “But I thought by the end of the first quarter, we were getting some good looks. I thought they would fall if we just stuck to that plan.”

On a lob in under the basket, Robinson scored to make it 9-5 but, over the last two minutes of the opening quarter, the only basket was a short jumper by the Grizzlies’ Semonte Henderson. In the final :48 seconds, the Hornets missed three shots.

Neither team scored in the first two minutes of the second quarter. Along the way, Lambert took a charge on a Williams’ drive. Later, Wallace got the worst end of a close block/charge call.

Finally, with 6:00 left in the half, Robinson popped a 3 and, off a Northside turnover, Hunter hit a jump-hook over Williams to make it 11-10.

The Hornets went the final 4:25 of the half without a field goal. A free throw by Lambert was their only scoring. With Norwood’s throw in at the buzzer, the Grizzlies led 25-14 at the break.

Payne opened the second half with a triple but, with 4:46 left, it was still a 10-point difference.

Braylin McKinley and Williams scored the last 4 points of the quarter, however, and it was an 8-point lead going into the final stanza.

McKinley opened the fourth with a basket but then Robinson drove for a flying layup and Hunter hit a free throw. Off a Northside turnover, Robinson drove for a bucket then Lambert made a steal and worked the two-on-one break with Hunter, cashing in with a layup to make it 37-34.

The Grizzlies had to use two timeouts in the next few seconds, the second to avoid a 10-second violation.

With the defense concentration on Williams, he found the 6-5 McKinley for a layup. In turn, Hunter missed a 3 but Lambert was there for an offensive-rebound basket. And, when Robinson took a charge against Releford, the Hornets had a chance to tie it.

They had three shots at it but didn’t score again until, off a steal, Payne was fouled at the rack. His layup just rolling off the rim. He hit a free throw to make it 39-37 with 2:19 to go.

Another Northside turnover led to another bucket off the offensive glass by Lambert that tied the game with 1:49 to go.

The Hornets continued to scramble and trap on defense but, with 1:15 left, Releford got open on the left wing and nailed the 3 that the Hornets never quite overcame.

Bryant turned the ball over but Releford missed. Williams rebounded, and, after a timeout, Noah Gordon was hit with a charging foul driving into Robinson.

Bryant had to foul twice to get the Grizzlies into the bonus. The seventh came with :08.5 left, leading to Abrahamson’s timeout then Releford’s clutch free throws.

The Hornets will return almost everybody, and they’ll get another shot at a title. But there are no guarantees. And this was Lambert’s last shot at it.

“He had a great season,” Abrahamson said. “I’m really proud of him. He’s really grown into a leader, by example and vocally. I’m proud of him. He really worked on his game. He’s got a scholarship to Paris Junior College, so we’re thrilled about that.

“The best part about my job is to watch that growth in maturity, seeing from where he started to where he came. He grew up,” he added.