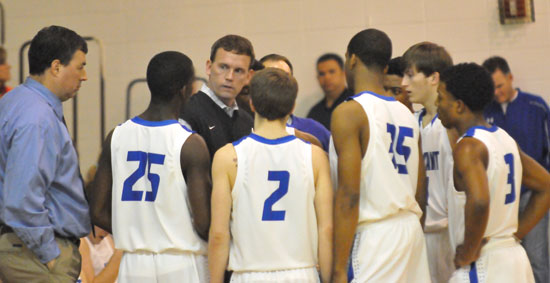 With four wins in their last five games including an impressive 14-point victory over[more] the Pine Bluff Zebras, the Bryant Hornets appeared to be headed for a strong stretch run, much like the one that took them to the Class 7A State tournament semifinals last year. 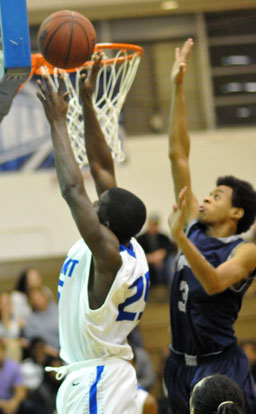 Whether the recent success had made the Hornets overconfident or they were too relaxed playing at home, they were not the same team on Tuesday night against the Little Rock J.A. Fair War Eagles.

Granted, the War Eagles had something to do with it but, for whatever reason, the Hornets were not sharp, right from the start. Fair took advantage with a 13-0 run starting with a buzzer-beating 3 to end the opening quarter on the way to building a 21-10 lead by intermission. And though the Hornets made a couple of runs at them in the second half, they wound up absorbing a 56-48 loss.

“You can’t go back and play this one,” the coach said. “We go to Sheridan on Friday. We’ll fix it.”

The Hornets lost at home to the Yellowjackets, 61-56, on Jan. 15, the fourth loss of a four-game skid at the time, which they followed up with wins in four of five.

Ah, the inconsistencies of youth can drive a coach crazy.

Fair point guard Alex Barnard scored 21 points in the game including 9 of 10 free throws in the fourth quarter to put the game away. Alante Plant had 10 points, Shawn Jackson 9.

Abrahamson had his team switch to full court pressure and more man-to-man defense in the second half. After the War Eagles committed just one turnover in the first half, they suffered 10 in the second but never relinquished the lead.

“We didn’t have a choice,” Abrahamson said of the defensive change. “If we didn’t, they’d just hold it. Our zone has been pretty effective for us. Tonight we were very lazy in it, didn’t rebound out of it. And then, really, they got a lot of easy baskets out of that press. We scored a little bit and the crowd got into it a little bit but they got just as many easy baskets as we did.” 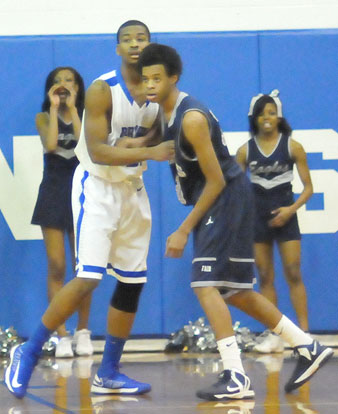 The Hornets had a 7-4 lead going into the final seconds of the opening quarter but Jackson beat the buzzer with a 3 to tie it then opened the second stanza with two more triples. Plant followed his own miss then a stickback by Demarius Robinson make it 17-7.

Bryant's lone basket of the second quarter, a 3 by Hill came with 2:20 left in the half. He appeared to have an three-point play opportunity inside the final minute but a charge was called instead of a block and not only didn’t he get a chance to go to the line but the basket was wiped out too.

Hill hit a jumper in the lane to start the third quarter but Bernard drained a 3. Hill answered with his second trey and, the Hornets gradually began to climb back into it.

Plant scored inside but Giles grabbed an offensive rebound and scored, resulting in a three-point play. After a Fair turnover, Rainey fed Hill for a layup and it was 26-20.

Robinson hit a layup off a drive-and-dish play by James Miller then Hill and Plant traded baskets with Bernard getting an assist on another drive-and-dish. 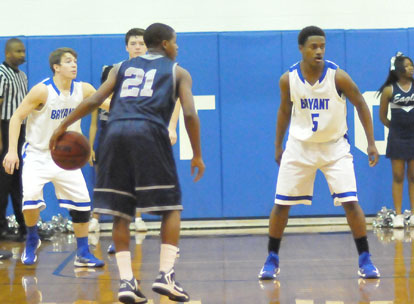 Luke Rayburn drove for the basket but didn’t get the benefit on the charge-block decision. But Rainey forced a turnover by guarding Jerrick Cole for five seconds. Moments later, Hill kicked out a pass to Giles in the corner. He drained a 3 and, when Hill followed up with a driving layup, it was 30-27 going into the final minute of the third quarter.

Plant, however, scored before the period was over and a three-point play by Marcus Houston to start the fourth quarter helped the War Eagles build the lead back up to 11 before the Hornets staged another run.

A drive by Brian Reed and a pull-up jay by Rainey cut it to 40-33. Bernard converted his first two free throws of the period but an offensive-rebound bucket by Rainey then a drive for another bucket kept the Hornets’ rally going. Simmons converted a pair of free throws, Reed made a steal and Giles, after pulling down an offensive board, drained a pair from the line and the Hornets had carved the advantage to 42-41 with 3:39 left.

Bernard stepped up once again for the War Eagles and drained a 3 and when the Hornets couldn’t answer, the parade to the free-throw line began for Fair. Barnard hit two and so did Plant, pushing the advantage to 49-41.

Simmons hit a 3 and the Hornets forced a turnover but, again, they were unable to grab the opportunity. Barnard added two more free throws with 1:04 to go, making it 51-44, a three-possession game.

Simmons went to the line but came up empty at the other end before Barnard hit two more for Fair. Giles missed the front end of a one-and-one and Robinson sank a pair to make it an 11-point lead again with :45.8 showing.